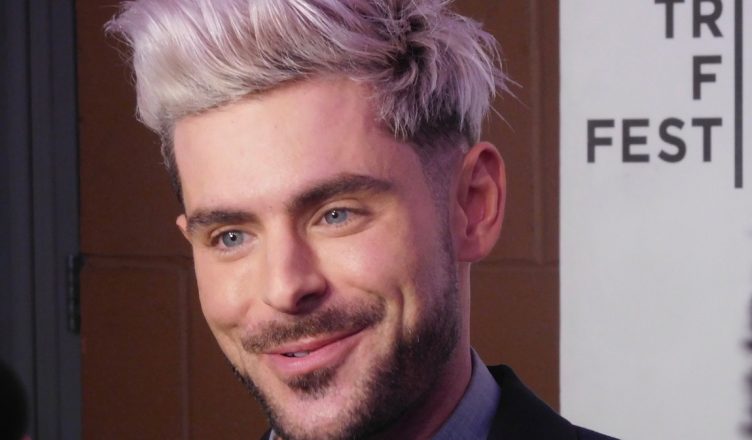 Teenage heart throb Zac Efron plays the diabolical Ted Bundy in the Netflix film “Extremely Wicked, Shockingly Evil and Vile,” which premiered Thursday evening at the Tribeca Film Festival. Efron acquits himself well in a part that must have been excruciating to inhabit; he plays a psychopath who murdered women by reeling them in with his good looks and charm.

As though to shake himself away from the character he plays in the drama., Efron has a totally new look. He has dyed his hair silver-grey, pompadour on top and shaved close to the side. He pulls it off, but he was almost unrecognizable on the red carpet where he goofed around with photographers and press and barely stood still.

On the red carpet I asked Lily Collins — who next appears in “Tolkien” — what was key for understanding her character, a woman who was at first in denial that her fiancee was a serial murderer.

“Well, I got to meet and speak to Liz,” said the actress. “She believes him to be innocent, and so I wanted to make sure that as an actor going into this knowing that he wasn’t innocent that I was able to suspend disbelief while filming,” she told me. Collins said the challenge was not to judge her character, who “didn’t think he was guilty, but really knew he was guilty, so it was switching that and not being able to look at all of the information out there to taint my opinion as Liz. It was very complicated to try to get to that point.”

As for the continued fascination with the serial killer, said Collins, “The Ted Bundy court case was the first televised court case in history, which had a huge effect on true crime and people’s fascination with it, and I think we’re always fascinated by people that turn out to be different than what expect, because we all have preconceived ideas of what people are going to be like, and when they completely turn it its head, it can be quite surprising and shocking. And this is a case that that really did that, so to be a part of the telling of that was really interesting.”

Zac Efron as Ted Bundy is a curious choice. On the red carpet I asked the director what inspired him to cast him as a serial killer.

“When I was thinking about doing this movie, I called my college-aged daughters up and asked them if they knew who Ted Bundy was and neither one of them did. Neither did any of their friends. So for me, the lessons of Bundy can’t be overstated,” he said. “And the lessons of Bundy are, just because somebody looks and acts a certain way, doesn’t mean you should trust them. Bundy was a master manipulator. And people just thought he was a charming, good-looking fellow who could do not wrong, and that’s why he eluded capture for so long,” the director said.

So hiring somebody like Zac, who was my first choice, and thank God he said yes, Zac is revered by a certain demographic. For a certain demographic, Zac Efron can do no wrong because of how he looks and acts. And so to give people the literal experience of watching a film with one of their icons who at part of the film they’re actually liking him and suspending their disbelief that he’s a serial killer, so that by the end of the movie when Elizabeth, played by Lily Collins, realizes the horrible person she’s been living with, I want that audience to have the same reaction of betrayal and disgust that they’ve actually liked this character for part of the movie. Because that brings to life the message of the movie, which is the people who you least expect and most often trust are the ones who do evil in this world. Whether it’s a priest who commits pedophilia and holds mass the next day, or somebody like Ted Bundy who deceived everybody.”

I asked Berlinger how his star prepared for the role and if he observed how challenging it was for Zac the part of such an evil character?

“Yeah, he was in a dark place for a big part of the shoot. So I gave him materials to research and we talked a lot about the character, and he gave it his all.”

He added, “I actually didn’t necessarily think when I cast him that he looked a lot like him. But a little bit of hair, not much makeup, no prosthetics. The only thing we did is we put in false lower teeth to match Bundy’s, because bite mark evidence plays a role in how he was ultimately convicted. So, I wanted the teeth to be similar. But we did not do a lot of prosthetics. And he just inhabited that role. The first day on set we all did a double-take. We knew we were on the right path because somehow he just … he lost some weight and just, we just knew we were on the right track.”

Did Zac need therapy after shooting?

“He needed some time away. He took a trip and kind of cleared his head,” said Berlinger.