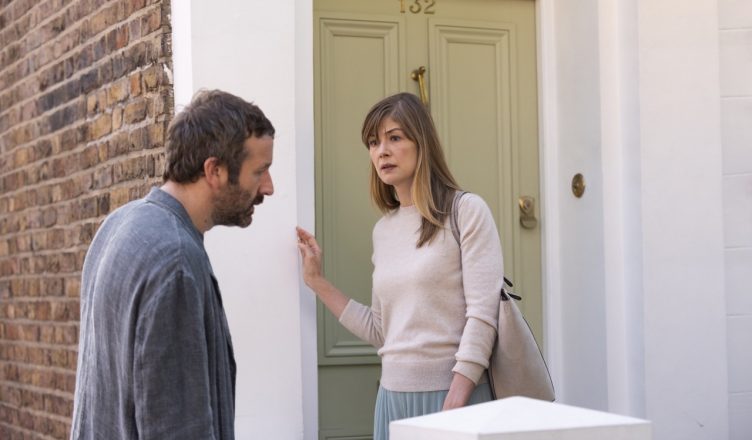 Chris O’Dowd and Rosamund Pike star as a couple trying to mend a marriage that is unraveling in “State of the Union,” directed by Stephen Frears (“A Very English Scandal,” “Philomena,” “My Beautiful Laundrette”) and written by Nick Hornby (“High Fidelity,” “An Education,” “Juliet, Naked”).

“State of the Union” takes place entirely in a London pub where the couple, both in their early 40s, meet before each weekly marriage counseling session. They reminisce about their past and hash over their current dilemma. The husband has lost his interest in sex — and is currently unemployed — and the wife, a gerontologist, has had an affair. Over wine and ale they bicker over what went wrong and what they will tell their marriage counselor. From the pub window they can spy on couples  departing from their therapist’s office and discuss which of these couples have a shot at saving their marriage and what even brought them to counseling to begin with.

The series is told in ten-minute increments over ten weeks on Sundance TV. All ten episodes, which took three weeks to shoot, screened Saturday evening at the Tribeca Film Festival, attended by Frears and Hornby. Afterwords the acclaimed screenwriter and director participated in a lively Q&A, where they discussed working with Pike and O’Dowd, and the short episodic format that was new to both of them.

As for setting the entire series in a pub preceding the couples’ therapy, said the screenwriter, “It’s before the sessions that you’ve got a week of life to catch up on, plus last week’s session plus maybe thinking about what this week’s session is going to be. It all comes out in a jumble of incriminations and things from way back in the past and it seems more fun if I write it that way.”

Admitted Hornby, “I don’t know what I was doing to be honest when I wrote it. I thought I’m going to try and write ten, ten-minute episodes and see what happens and when we’ve been invited to these festivals here and sometimes we can’t think of anything else to do apart from show all ten. So the first time we were quite trepidatious about it, but in fact it seemed fine.It does have a beginning, a middle and an end, so it kind of works as a movie.” He added, “And then I had some time, I was stuck, waiting for screenplays to be made and not enough time to start a novel.”

Frears was asked if there was a difference between doing other kinds of television series and doing this, either because of the length or because of the single location.

”The things you normally do and seem to do when you make a film involving camera work, quite soon I realized that they were a complete waste of time, that they didn’t help. Really the only way of telling the story was through the two actors. So I slowly retreated to the back of the room and did less,” he said. “Normally, I would do a little track here, I will move the camera down. All the things you do to keep it interesting. Charge it up, but you realize that that was actually counterproductive. And that the more passive the camera was, it meant that the actors had to do the work, and I was lucky that they responded.”

Hornby said the actors had a ritual “they did, a rather nice thing which I didn’t know, until recently, which was when we packed up, that they got a bottle of wine and sat in the park, and then read the next day’s episode while being much kind of looser.”

Added the screenwriter, “They had to learn two or three minutes of dialogue at a stretch and then shoot it again, and shoot it again so you think of that as a hundred minute movie.”

So, finally, what does the series say about marriage, if anything, Hornby was asked?

“One of the things that I wanted to do and the more I thought about it the more it seemed to be true, is that a marriage is a character and it’s effectively the child of the man and the woman. That they create something, which is completely unique to them, that is between them. And so it was something that I wanted to do was to try and create the character of a marriage and you realize that every day that you spend with somebody else, there’s another knot of complication added to this thing and I think they reached a point probably where they think you know what you can never undo all this. Or they don’t know how to go about undoing all that. And so that line, I suppose living about living on the fault line and embracing the uncertainty of it is about the most that the show has to say about the subject.”