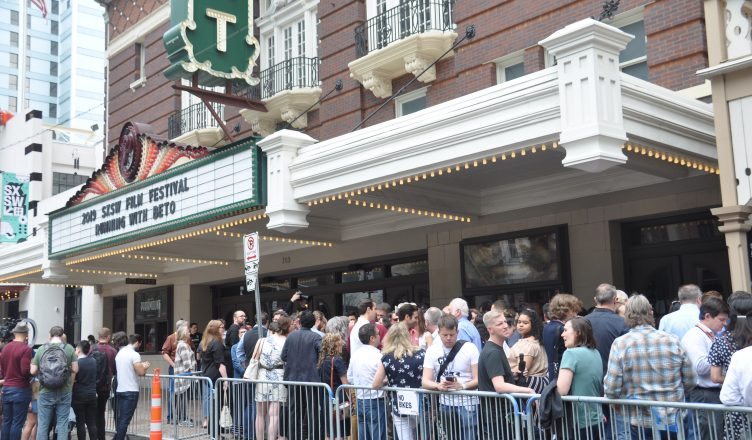 “Running with Beto,” the HBO documentary that will air on HBO in early spring, was screened at its World Premiere at the Paramount Theater in Austin this morning (March 9) and a rapt crowd of supporters got to see Beto O’Rourke, his wife Amy, and their daughter Molly up-close-and-personal during a Q&A after the film screened.

I was seated in the third row on the right when a large group of people began ascending the stairs that lead to the stage there. The tallest of the group, hunched over so as not to block the credits then running, was Beto O’Rourke, who managed a small wave to those of us who noticed his entrance with family and campaign workers and the director of the film, David Modigliani. 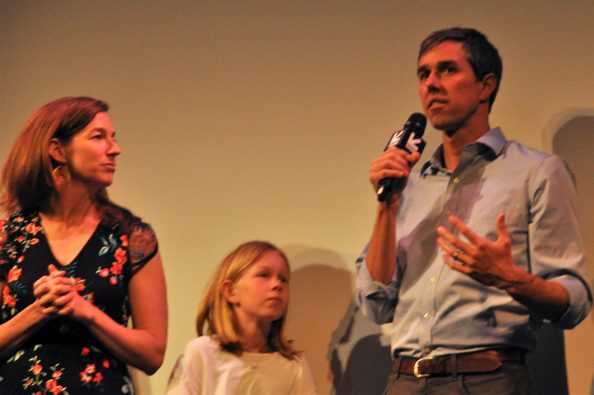 All spoke to us after the film. Director David Modigliani described his task as “wanting to capture a moment in Texas where there’s a real political re-awakening going on. It’s never too late or too early to get involved in politics.”

Modigliani had control of the film, however, saying that the 700 hours of footage they shot in nearly final draft format was cleared as his project (others wanted the job, as well) with Beto over lunch in Austin.  Beto protested, “I didn’t realize it would be THIS involved. I am very grateful that you did this with us.  The audience was probably wondering why Shannon Gay wasn’t the candidate.”

Shannon Gay was a particularly feisty blonde worker on the campaign who fought for Beto’s win to promote veterans (among other issues) and was seen crawling around on her roof to tack down a large campaign sign in a prominent spot. When asked what her reaction was to being onstage this day,  Shannon’s response was, “I wish I had a vodka IV,” which got a laugh. She is shown in the documentary saying “Tough as Texas, my ass” (an allusion to Ted Cruz’s campaign slogan) and “I want so desperately to hear Beto tell Ted Cruz ‘pack your shit and get the Hell out of Dodge.’” Easy to see why Shannon’s outspoken advocacy will catch your eyes—and ears.

When Amy O’Rourke (Beto’s wife) was asked her reaction to the rough draft that “David was kind enough to show us in advance,” she said her reaction was that it was “very powerful. We knew this was their (HBO’s) film and we trusted him (Modigliani) at every turn.” She also added, to the crowd’s amusement, “The only thing I asked was ‘Could you take out some of the expletives?’” The film was separate from the campaign and was being edited up until six months before the election.

Modigliani went on to say, “I felt it was brave of Beto to give us the access that he did. There is real conflict and tension and there are moments where he doesn’t always come off as a prince. It just shows the realities of the stress on the campaign trail, the realities of stress and tension within the family.  It has a realness that we were able to capture because of the access we were afforded. They were committed to running a no-BS campaign and we wanted to make a real no-BS film that captured that experience.” Modigliani, a Massachusetts native who is a graduate of the Michener Center for Writers at the University of Texas (and the director of the 2008 documentary “Crawford,” about George W. Bush’s effect on that small Texas town) added from the stage during the Q&A his suspicion that Beto’s campaign, in advance, was going to be interesting, that O’Rourke was a total long shot, and that he was unlikely to win. But

However, said, Modigliani, “I felt like there was going to be a national conversation that was going to run through the middle of this race.”

O’Rourke was asked point blank, from the audience (in the Q&A following the show), if he was going to run for President. He bobbed and weaved on that one, but you can sign up to be one of the first to find out at [email protected] [Sounds like a yes, to me.]

When the turnout in Harris County in Texas went up from 26,000 to 60,172 in the last election cycle, you know something is happening at the grass roots level. The possible candidate, onstage after the film, said, “Thank you to everyone who allowed themselves to hope and to dream.  I am grateful . Thank you. I was like, what can we talk about up here that will not make me cry.” (laughter) He added, commenting on the many candidates who subsequently drew inspiration from his attempt to visit every one of Texas’ 254 counties and bring the Democratic party alive like it had not been in Texas in over 25 years, “Turn hope into action.”