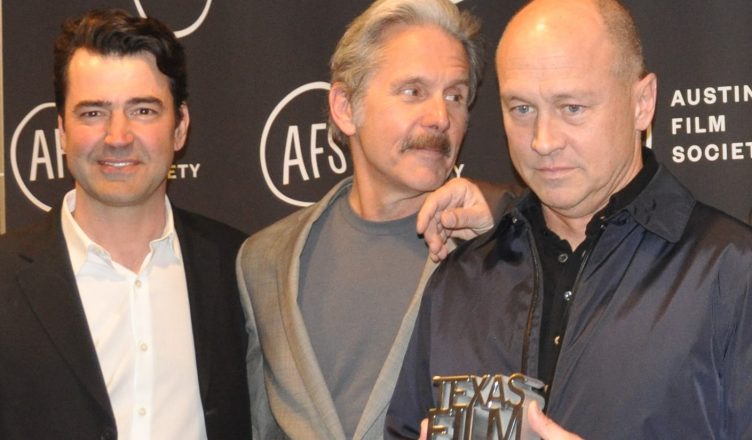 “Office Space,” with the log-line “Work sucks” didn’t exactly burst upon the scene back in 1999. It more-or-less sneaked up on the scene, buoyed by good word-of-mouth from all who saw it. It went on to become one of the most rented films of all time, but the fame “Office Space” has 20 years later took a while to build and spread (much like the fire in the film.)

Director and Writer Mike Judge (“Beavis & Butthead), who will be inducted into the AFS (Austin Film Society) Texas Film Hall of Fame tomorrow night,  once had a right-out-of-college mind-numbing job alphabetizing, which nearly gave him nightmares because of the monotony. That experience led him, on the heels of some comic shorts for “Saturday Night Live” and other up-and-coming comedy bits, to write and direct “Office Space” on a total budget of $2 million, shooting it in Austin, Texas.

Judge had a very specific idea of what he wanted to show onscreen. In fact, as one cast member said, there were even studies done of gray on gray. The world of “Office Space” must not be a lively place, but, instead, a place where your brain might rot if you stayed too long. One set decorator, (intent on doing what set decorators do), would put plants and photos on the desks of the fictional employees in “Office Space,” and Judge would systematically remove all such traces of humanity the very moment he saw them. One particular desk was graced with small alien characters; this so upset Judge that he actually swept all the figures into a garbage bag and dropped them in a trash bin 2 streets over. That was about the time the continuity department told him he would need to get them back, as they had already (unbeknownst to Judge) been featured in a scene shot earlier.

The dividers in “Office Space” had to be a certain height to meet Writer/Director Judge’s vision and, also, be high enough for one plot point. He wanted Bob Lumbergh (Gary Cole) to be able to casually lean on the dividers in a certain way, also; that meant a certain height. When only 2 such room dividers of the appropriate height could be found, the other short dividers in the room were set up on boxes and shot in such a way that this shortcoming (yes, that was intentional) was hidden from the audience.

The studio wanted “name” stars for the leads. Judge did not. Nevertheless, Judge agreed to show the script to Matt Damon (Damon declined), who, along with Ben Affleck, were “hot” properties at the time. Affleck wanted $5 million to do the film; the “Office Space” total budget was $2 million. That took care of Judge’s preference that unknown actors be used and, when he saw Ron Livingston’s audition, during which he appropriated a desk, chair and phone in an onset cubicle and went for broke, he knew he had found Peter, the lead character of the film.

The unfortunately named Michael Bolton (David Herman) was an early pick of Mike Judge’s, and Ajay Naidu completed the trio of engineer-like office clones who were constantly being badgered by boss Bob Lumbergh (Gary Cole) to get their TPS Reports in on time. The copy machine in the film (which was so hated it almost became a character in its own right) was taken out into a field and smashed to smithereens by the trio. Thirteen copiers were taken apart and loosely glued back together so that the destruction of the hated copy machine would go smoothly. What didn’t go so smoothly was David Herman’s attempt to break free and go back one last time. He nearly fell, but was held by Livingston and Nadu or Herman could have been seriously injured.

If the leads were not “famous,” then the lead love interest had to be a “name” actress. Jennifer Anniston was signed to play Joanna, who must wear the right amount of “flair” at her lowly job as a waitress in a restaurant modeled on TGIF. In fact, Judge asked the legal minds at the studio if they could USE TGIF. That was a resounding “no.” “How about TJIF?” Judge asked. Another no. They used a little-known restaurant (Chotchkie’s) and Jennifer’s running battle versus manager William King saw none other than Mike Judge, himself, play the part.

Who can forget “the O face” (Greg Pitt), the Bobs (John C. McGinley and Paul Willson), who reward Livingston’s Peter or Tom Smykowski’s full body cast? The Bobs improv-ed must of their dialogue. A tape of “the Bobs” improvising was shown to the suits in the studio at one point. It was a long, rambling diatribe by two gifted comedic improvisers. The studio was not amused, but they were ultimately let in on the joke and told that this was not actual dialogue from the real scene, but merely McGinley and Willson unleashed. Music in the film was also a dispute. Judge wanted rap music. The studio did not. Ultimately, Judge agreed to do something he said he would never do again, which was to remove the rap music if the focus groups disliked it. The focus group head female tried very hard to elicit a negative reaction from the focus group, but, luckily, the make-up was predominantly young men between 19 and 25 and they loved the music, so it stayed.

Chuck Norris’ son, Eric, was flown in to do the car crash scene, which could only be filmed once. It left character Tom Smykowski (Richard Riehle) in a full body cast, but, blessedly, released him from the office forever.

And then there was Milton. Milton of the red stapler. At the time, Swingline did not make a red stapler, so other colored staplers were painted red. Now, if you start working at the company, you are given a red stapler, just as Milton (Stephen Root) was. Root was not originally reading for the role of Milton, but he did so much with the character when reading Milton’s lines that the part was his. And so were the coke-bottle thick glasses. In real life, Stephen Root’s eyes were not that bad. The glasses made it almost impossible for him to reach for anything on his desk and actually judge its whereabouts. Root had to be fitted for contact lenses to “correct” the distortion of Milton’s thick glasses. It is a tribute to Stephen Root’s skill as an actor that he has worked continuously, for years, in character parts and, most recently, was in Jordan Peele’s “Get Out.” He also is “The Man in the High Castle” for Amazon.

I taught next to a Milton for 18 years. He was building a scale model doll house for his only child, a daughter. Every day for 18 years he would talk about the doll house until I wanted to run screaming from the building. He also put little pieces of masking tape on the floor of his classroom. Each student MUST have his desk lined up with the taped guidelines or face this teacher’s wrath. The droning teacher in “Ferris Bueller’s Day Off” who continually asks, “Bueller? Bueller?” was this man’s twin.  Milton could have been his doppelganger. When students were given detentions, they were made to copy large portions of the dictionary, thereby making every English student I ever had loathe using a dictionary or thesaurus. (Thanks, Mr. Miller!)

Another  “Office Space” cast member who has racked up a life-long career of parts in such series as “The Good Wife,” “Veep” and, most recently, “Fam” is Gary Cole. I met Gary Cole the first time at the Chicago International Film Festival in 2011. He played the second lead to Dennis Farina in the opening night film “The Last Rites of Joe May.” Both men have Chicago roots and Farina had always seemed quite congenial on film. But, upon entry, Farina quickly ditched all of the journalists (like me) who were there solely to shoot still photographs and/or ask questions for print or online outlets. He went immediately to the WGN television cameras and never gave us a moment of time. Gary Cole, by contrast, was very congenial, warm and genuine and talked with several of us while his co-star hogged the television spotlight.

Tomorrow night the AFS (Austin Film Society), founded in 1985 by Richard Linklater (“Boyhood,” “Dazed and Confused,” “Before Sunset”), will induct Mike Judge into the Texas Film Hall of Fame. “Office Space,” shot in Austin for $2 million,  is a gem that merits his inclusion. Linklater has said of reviews and reviewers, ” I’d like to see people get sued if they wrote a bad review of my movie. If you can’t say something nice you shouldn’t say anything at all.”

I’ve said some very nice things about “Office Space.” To conclude,  I highly recommend that you rent “Office Space” if you’ve never seen it. [It is time.]