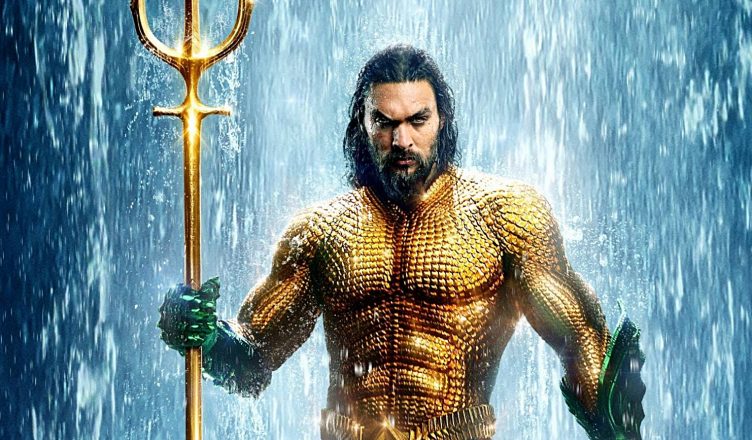 Aquaman spans the vast, visually breathtaking underwater world of the seven seas and reveals the origin story of half-human, half-Atlantean Arthur Curry (Jason Momoa), which takes him on the journey of his lifetime—one that will not only force him to face who he really is, but to discover if he is worthy of who he was born to be…a king.  (BONUS: Be sure to scroll to the bottom for special opportunity to win free tickets to see  Aquaman!)

As you could probably tell from the trailers, the visuals in this film are certainly a sight to see. The underwater setting was a big part of what made this movie feel like a fantasy of sorts.  Director James Wan does a magnificent job with the world-building of the underwater city of Atlantis. The vibrant colors and unique sea creatures are captivating to the eye and a wonder for imaginations. Not only does Wan shows us the beauty of the sea, but he also contrasts that with some of its horrors as well. I also thought that some of the Atlantean technology was pretty cool too. While advanced, it was nice to see how the tech was specifically focused through the use of water. 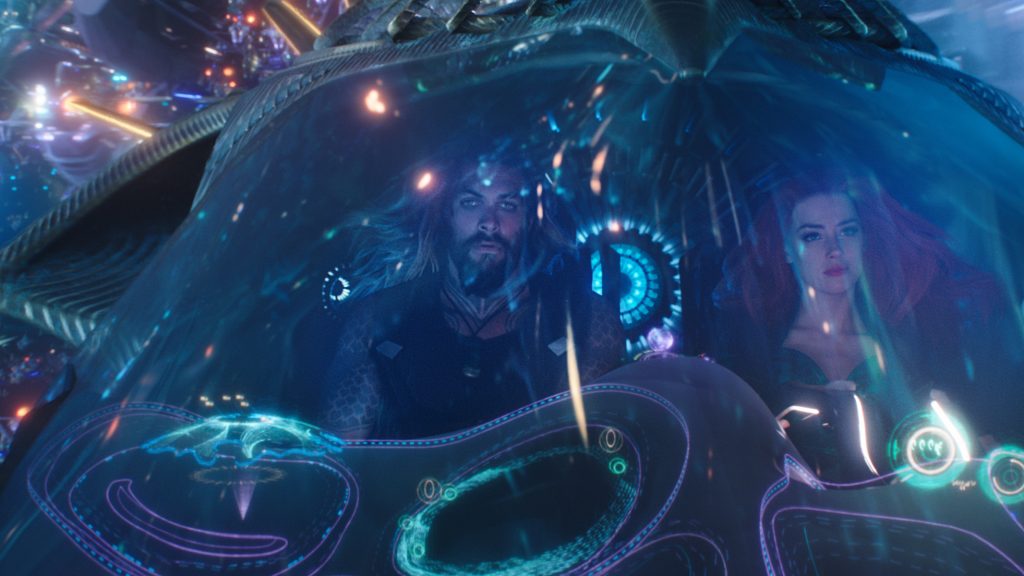 Part of what makes the visuals in this film work is the amazing cinematography. If you’re familiar with Wan’s work in other movies, then you’ll know that he tries always give you a fresh and dynamic perspective to a scene. I loved how Wan was able to tell some of the story via flashbacks by using pretty effective transitional shots throughout the film. Another example of the great camera work can be found in the action scenes, we have what appears to be an overhead, 360 degree camera shot all in one large take. That really helped to make the fighting scenes more intense and suspenseful. 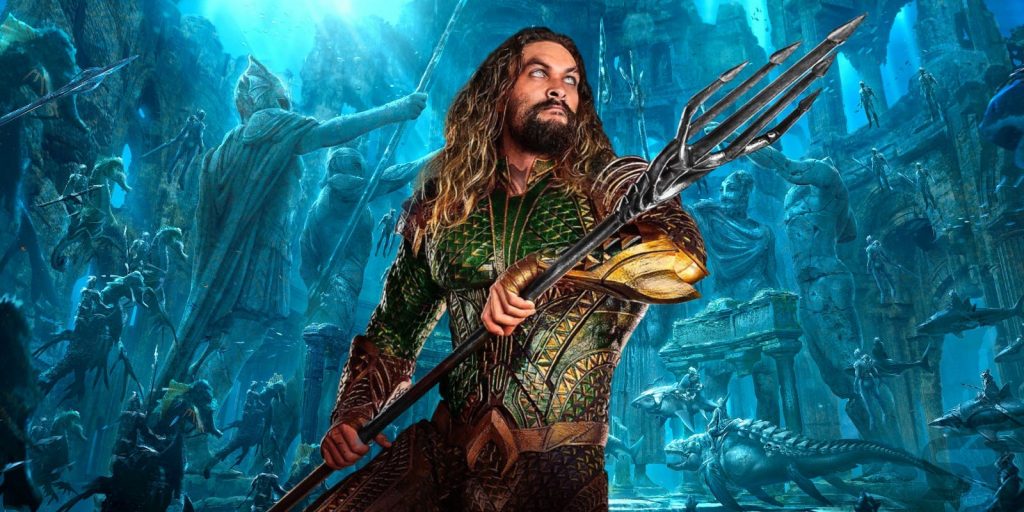 One part of the writing I did appreciate was that they didn’t let certain themes slide. For example, there’s a theme of personal and moral accountability that Aquaman does not ignore and fully embraces. I thought that was an excellent moment in the film, although brief, to help flesh out his character’s growth. It also served to prevent the motivations of Aquaman’s enemies from being cheap and unfounded.

Let’s talk about Aquaman himself played by Jason Mamoa. If you enjoyed his performance in Justice League, then you’re about to get more of the same here. You’ll probably enjoy his heroic feats and acts of incredible strength. It’s pretty easy to say that this role was specifically made for Mamoa. He looks like he’s having fun being Aquaman, and through that, you’ll have fun with him as you watch the movie.

I think many of the stronger performances came through the supporting actors in the film. Willem Dafoe gave a solid and consistent performance as “Vulko”. Nicole Kidman was exceptional as Atlanna, and I thought her fighting scenes were top notch. I think I was more impressed with Amber Heard as “Mera” in regards to the use of her powers. (More so than her actual performance.) Patrick Wilson was also a pretty convincing “Ocean Master” as the main villain in the film. I liked the way he was able to be the bad guy, but still have some understandable motivations as well. 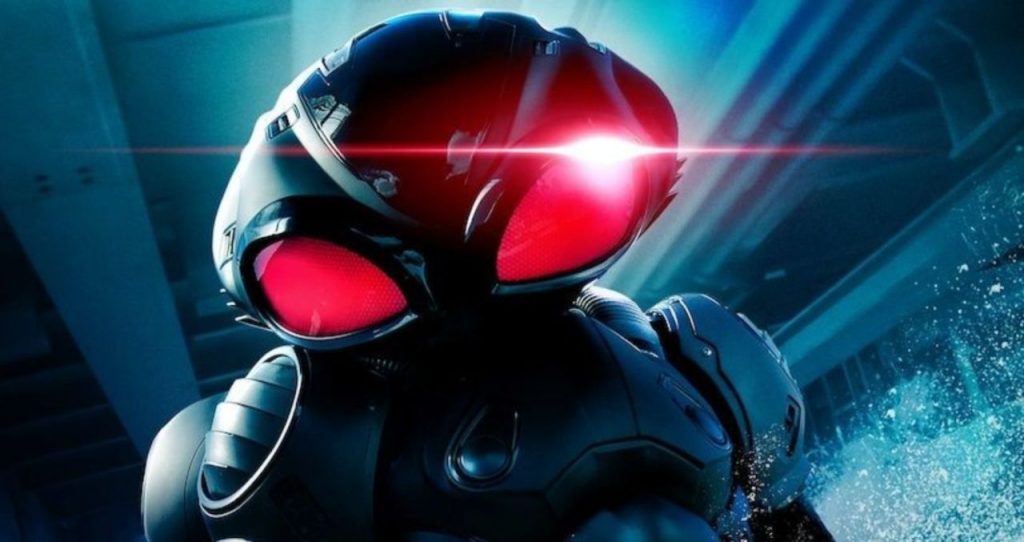 Of all the performances though, I think Yahya Abdul-Mateen was by far my favorite. I thought he nailed the role of Black Manta. Although the writing in this film didn’t help his character much, I think that Abdul Mateen’s acting overcame all that. Besides all of that, Black Manta looked really cool in his suit. I certainly wouldn’t mind if they continued to expand on his character in the future.

One of the biggest issues I had with Aquaman came in its writing. It’s bad enough that this movie’s marketing practically spoils the film from beginning to end. You literally see in some of the movie posters or trailer footage some big reveals that the movie devotes a lot of time to set up. Regardless of whether you even paid attention to the marketing, the film’s writing makes the movie more predictable than it needs to be. Be sure to brace yourselves for another “Martha” moment too. (A la Batman V Superman.) 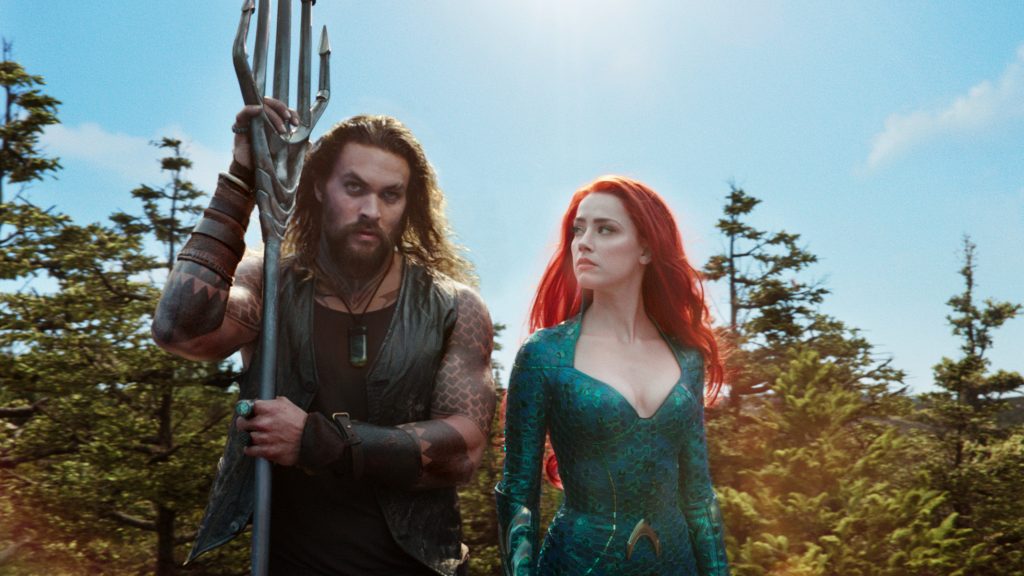 One constant sign of the poor writing came in the form of tonal shifts with comedy. This is a bit tricky to critique because the movie does have some really good humorous moments in the film. There are a number of situational comedic points in the film, but rather than allowing those moments to be organically funny, there always seems to be some cheesy one-liner to force the issue. As a result, it’s hard to take Aquaman seriously at times. Sometimes it feels as though it’s aware of its campiness, and other times it feels like it tries too hard to funnier than it needed to be.

Another knock against this film comes in the form of the cliche superhero tropes in the film. For as much praise as I usually like to bestow on director James Wan, I can’t let him slide with some of the stereotypical superhero tropes. You can bank on some  typical superhero poses that look like they were made for the trailers but were kept in the movie because…well why not? Even some of the fighting scenes were plagued with cringe-worthy shots or stances by the characters, and then followed up with a corny one-liner that you’d probably here from an action packed B-movie. This isn’t 2008, and comic book movies have come too far to have to still be resorting to these things.

I don’t know if this is truly a bad thing or not, but for some reason this movie really loved interrupting people’s conversations with explosions. The first couple of times it happened, it was a bit shocking. However, after the fourth or fifth time, it just became more of a “Come On” moment due to the constant repetitions. I’m pretty sure this will definitely make it on the next “Honest Trailers” episode for this film. 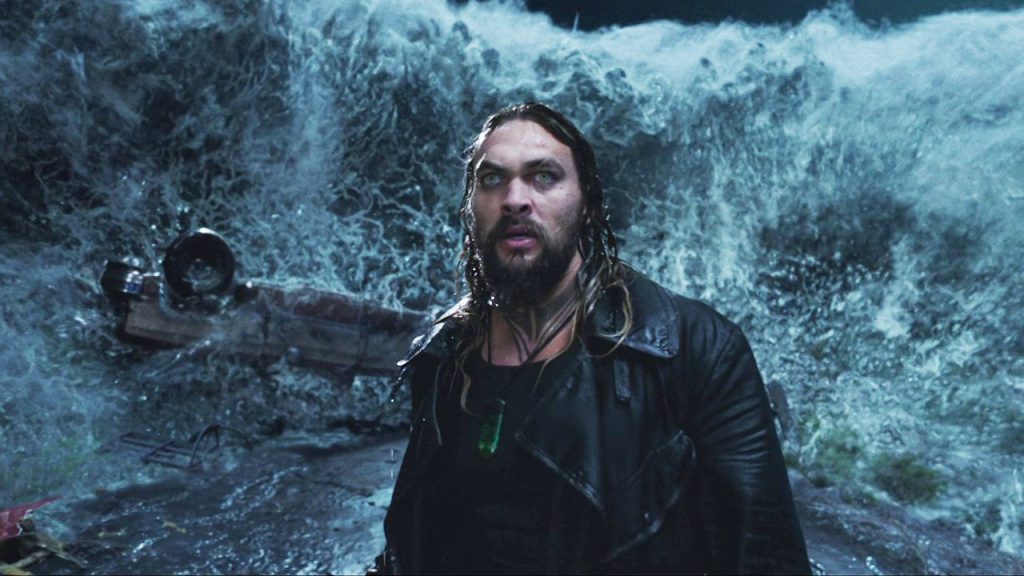 Despite being a role specifically made for Jason Mamoa, I don’t think that it did him any favors in the acting category. This is not to say that Mamoa is a terrible actor. I do believe that he’s got very strong and positive abilities in some roles. I just don’t think that he has much range  as an actor. My issue in this film with his acting came in the form of the comedic breaks in dialogue. To be clear, I’m not saying that he should never be funny and just be serious all the time. What I’m saying is that in this film, when a situation didn’t really call for comedy, he would break the scene in what appeared to be almost a bit of unnecessary improvisation. Have you ever seen a deleted scene or take, where the actor goes a bit off script? In Aquaman, it feels like those scenes were left in on purpose, in what I believe, was a way to cover for some of Mamoa’s weaknesses as an actor. You may notice more of this in his conversations with Amber Heard’s character “Mera”.

Aquaman is a visually entertaining superhero film that is sure to entertain the masses. Does it have its fair share of flaws? Yup! Aquaman is a lot of movie, that does so much that you probably won’t really care about its flaws. And when I say that it does so much, I mean that the movie feels like it’s inspired by a ton of other films. If I had to compare, I’d probably say that Aquaman was like Tron, The Little Mermaid, Finding Nemo, Shark Tale, Jurassic Park, King Arthur, Pacific Rim, and I’m sure a number of others that I can’t recall. I don’t think that I would say this was a straight up copy of Black Panther, mainly because this movie was in development around the same time. Plus, it does things slightly different enough for it to be its own film. 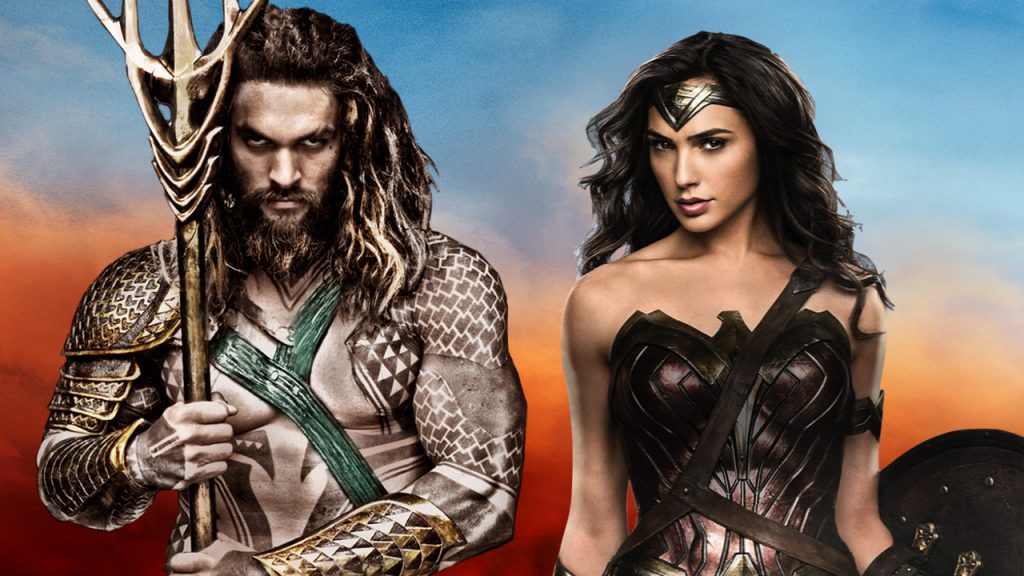 I should also mention the fact that this film is trying to be its own thing. Similar to Wonder Woman, both are set to take the lead as DC’s best films to date. (Excluding The Dark Knight) In my opinion, Aquaman does edge out Wonder Woman simply because it offers way more in the world building and visual effects department. It also doesn’t fall apart in the third act the way Wonder Woman did. So Aquaman ends up becoming DC’s best movie by default by simply making less mistakes.

I think that Aquaman will be for a nice watch for audiences that loved films like Venom or even Justice League. If you want to see cool things on screen, don’t care about the flaws in the writing, and don’t mind cheesy humor, then Aquaman will It’s still entertaining. It’s definitely worth the watch, and I do think that the best way to experience this movie would be on the biggest screen possible. I don’t think that 3D would be necessary either. Last thing, there’s only one post credit scene, so be sure to stay for that.

1) Enter your valid email address below to be eligible to win in our Aquaman contest.

2) Complete the additional social actions to earn more entries. (The more points you score, the higher your odds of winning!)

3) Check your inbox and confirm your email to be eligible to win! 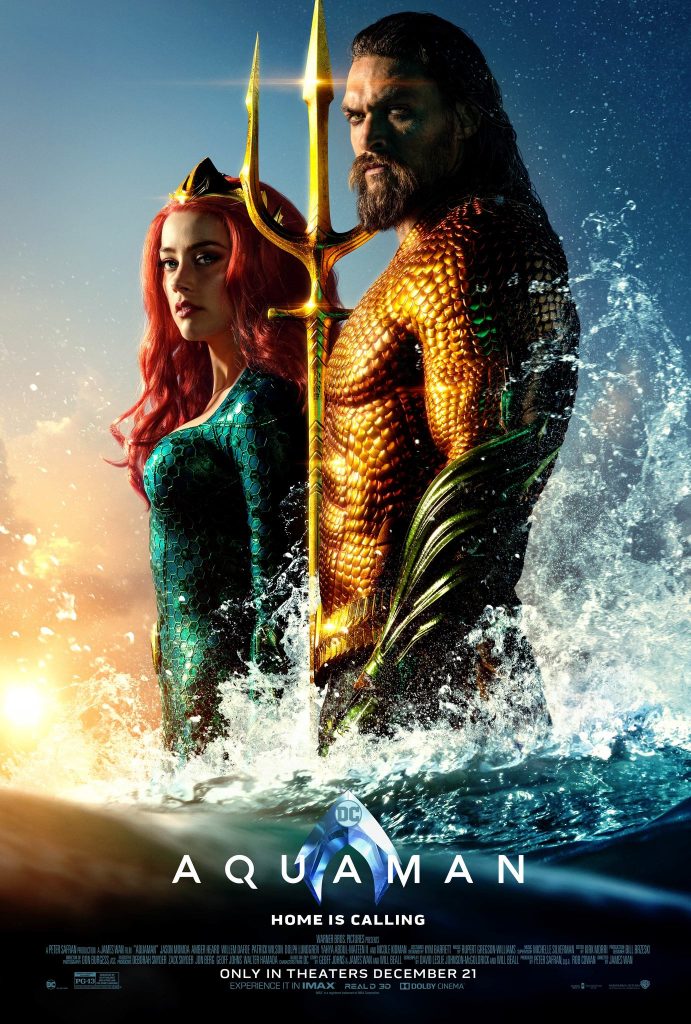