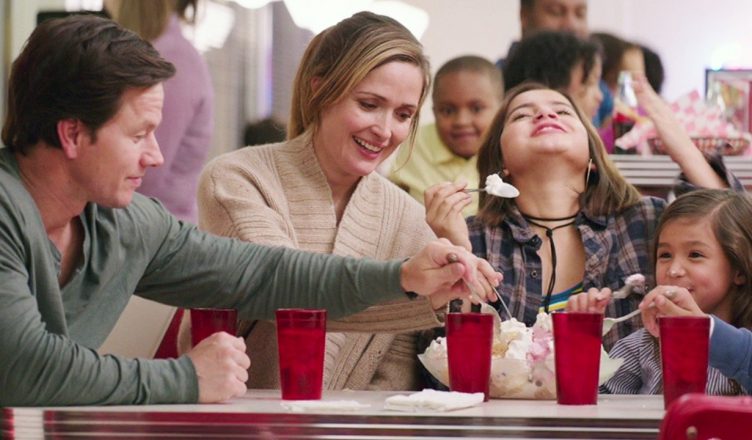 Mark Wahlberg and Rose Byrne turned up recently at the Mandarin Oriental hotel in midtown to promote their new comedy, Instant Family, in which they play clueless white-bread adoptive parents of a trio of Hispanic-American siblings. The stars were joined by the director and co-writer Sean Anders, fellow cast members Tig Notaro, Julie Hagerty, Julianna Gamiz, Gustavo Quiroz, co-writer John Morris and producer Marc Evans. (This past weekend the California premiere was canceled because of the wildfires.)

Along with the comedy, Instant Family pulls a lot of emotional strings. Byrne and Wahlberg play a couple who decide late in life to start a family. They fumble their way through the foster-care system and bring into their home a rebellious 15-year-old (Isabela Moner), who it turns out is a package deal with her two younger siblings (Gamiz and Quiroz). The youngsters turn out to be more than the couple bargained for and mayhem ensues. Instant Family is inspired by the real-life experiences of Anders, who with his wife adopted three children after fostering them.

At the press conference, Anders said he drew on his own experiences but also researched stories and spoke to other people who adopted older children.“So many genuinely funny things happen along the way. It’s a terribly awkward, chaotic situation when you have these people that move into your house and you don’t know them and they don’t know you. And you’re trying to figure out how to fit in your family. So it might not seem on the surface that that’s grounds for comedy, but there’s so much chaos that (for me) there was something genuinely funny that really happened along the way.”

Anders said he chose his leads because, “I wanted the parents to be able to convey how frazzled the whole thing gets. So really, being unhinged both in joyous ways and in frustrated ways and to be able to do that in a way that is both grounded and funny. Those are the kind of actors that we needed and Mark and Rose were perfect for that.”

Anders, who has collaborated with Wahlberg on both “Daddy’s Home” comedies, also thought Wahlberg’s action film persona would add another dimension. “I wanted the main character to be kind of a guy’s guy. And I felt like Mark, who is kind of an off-screen tough guy, to see him getting really emotionally invested in these kids and getting emotional over these kids would really resonate, and I think it does.”

At one point during the press conference Byrne whispered to six-year-old Julianna, “Who did you like better: Me or Mark?”

Byrne was asked how working on Instant Family changed her style of parenting?

“Well, my children are little. They’re like two and one,” said Byrne of her toddlers she shares with boyfriend Bobby Cannavale. “The kids are obviously older in [ Instant Family ], so that was in a whole, in a way, you’re in a different stage. But the tantrums I related to. Right, Julianna? She was very good at those. She is a champ. But Mark was very good with dealing with Isabela Moner’s character, having his own teenage daughter at home.” 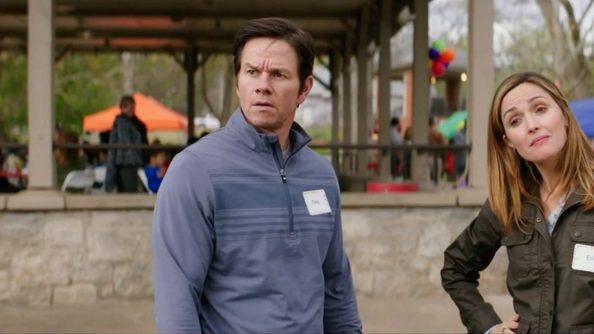 “Yeah, there’s that,” said Wahlberg, who has four children, including a teenage daughter. “I’m in the thick of it all (now). So it’s like never a dull moment. But it’s nice because every day when Isabela was playing the part of Lizzy and throwing attitude, especially towards her mom, I was actually dealing with that on the phone, FaceTime in real life. And she reminded me so much of my daughter, who is starting to come out the other side, not completely. So it’s all good.”

A journalist noted that Wahlberg’s kids were fortunate enough to be raised in a situation that was completely different from the hardscrabble life he experienced growing up in Dorchester. Did he ever think of leaving the money hills of Los Angeles or Beverly Hills and going, maybe up in the desert, with his kids for the next five years?

“We thought about a deserted island,” said Wahlberg. “But no, they’ll find their way back to civilization. It’s just a matter of it doesn’t matter really where you are. It’s just kind of how you raise them and what kind of example you are and influence you are on them. And I enjoy the weather in California too much.”

Wahlberg’s divides his movies almost evenly between comedies and action thrillers. He came to the press conference directly from the Boston set of his new Netflix crime thriller, “Wonderland,” directed by Peter Berg (Lone Survivor). Based on the Robert B. Parker series of novels about the wisecracking Boston detective Spenser, Wahlberg is performing many of his own stunts. He showed a journalist the ice pack he held behind his back to calm a herniated disc he recently aggravated on the Wonderland set.

“That’s for my back, my lower back,” he said. “I just tweaked it a little bit the other day, working in the cold and not stretching out enough.” And yes, he admitted, comedies were a nice break from the heavy-duty action stuff.

“Just to be able to sit on a sound stage, sit on a couch, talking to people, no explosions, nobody beating the crap out of me,”  said Wahlberg. “The other day I got attacked by a German shepherd, I got run over by two cars. And this is all before lunch. So yeah, it’s nice.”