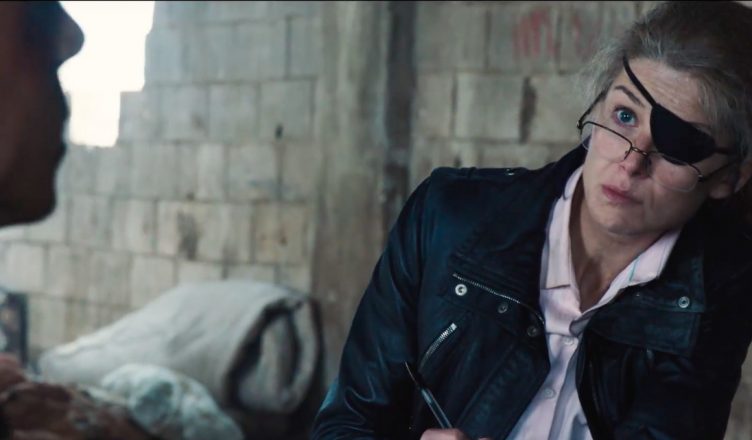 Director Matthew Heineman (“Cartel Land,” “City of Ghosts”) makes what “Variety” writer Peter DeBruge termed “a remarkable transition” from documentary filmmaker to narrative filmmaker with his film “A Private War.” It opens wide on November 16, 2018. Starring Rosamund Pike (“Gone Girl”) as famed war correspondent Marie Colvin of the British Sunday Times, the entire cast commits entirely to telling the story of journalists who put themselves in harm’s way to get the story out to the world. A Private War taps into Heineman’s coverage of the Syrian war being waged against his people by Syrian Dictator Assad. [Most of us have seen the “Sixty Minutes” footage and it is horrifying.]

As Marie’s character says, “I feel we’ve failed if we don’t tell what was done.” Early in A Private War, she tells Editor Sean Ryan (played by Tom Hollander), “There are people dying here, and nobody knows it’s happening.” She repeats, “When you’re covering a war, you have to go places where you could be killed…You have to make that suffering part of the record.” To do otherwise, she suggests is not possible. “This is the rough draft of history.  You have to find it.  If you lose that, you’re not helping anybody. You’re just making yourself feel better.” Her editor and her eventual photographer sidekick in the film, Paul Carlson (Jamie Dornan of “Fifty Shades of Gray”) tell her, “You have the God given talent to make people stop and care.” Certainly Colvin was the best asset on the foreign desk, named Foreign Correspondent of the Year in 2001.

A Private War takes a look at Colvin’s travels through Sri Lanka, Marjah in Afghanistan and Misrala in Libya, as well as her final posting to Syria when she was killed. She lost her left eye to forces that fired on her in Sri Lanka but she courageously continued, covering her blind left eye with an eye patch  while enduring post traumatic stress, nightmares, and a host of other anxieties.

“You are like a moth to a bloody flame,” says one of her lovers, and it is that seeming death wish explained as a desire to reveal the truth to the world, that propels her on her final assignment to Homs in Syria, where she was killed on February 22, 2012. As recently as April of this year (filed, originally, in July of 2016) Colvin’s family filed charges against the Syrian government claiming that they have proof that her assassination was ordered by the government.  French photographer Remi Ochlik died with Colvin, and another companion who survived (portrayed in the film by Jamie Dormin) was Paul Conroy.

Director Matthew Heineman answered questions about his first film that is not a documentary, joking that he sometimes showed up on set and looked at the call sheet and wondered what those jobs were. He said,

“I feel a huge kinship with Marie Colvin, with what she did and tried to do.  When the script came to me, it spoke to me.”[ Heineman’s previous award-winning effort, “City of Ghosts” was about the assault of Raqqa, a city in Syria located on the northeast bank of the Euphrates River, 99 miles east of Aleppo.]

How was the collaboration with Rosamund Pike?

“The City of Ghosts” documentary that I shot made me want someone who would really dig into this story and get their hands dirty.  I knew right away that Rosamund Pike would do that.” He went on to explain that the prospective star and he wrote essays about Colvin that they e-mailed to one another and both felt strongly about telling her story. Colvin is credited with saving the lives of 1,500 women and children in East Timor, when she refused to abandon them and waited with them for the United Nations, reporting all the while.  Other hot spots of the world that she covered included Chechnya, Kosovo, Sierra Leone, Zimbabwe, Sri Lanka and East Timor, in addition to Syria, where she was killed by an IED.

Heineman shared that those telling their stories in the film are non-actors. They were real refugees from Syria (the film was shot in Jordan) who told their real-life stories. The scenes of women at a mass grave of 600 people in Kuwait, wailing as the grave is unearthed, were real families of victims of that genocide. Said Heineman, “I’ve shot at all the war zones in Jordan. It took weeks and weeks finding refugees who had real-life stories to tell. I interviewed them as though for a documentary. The women at the grave site are all real.”

How did you feel about directing scenes of violence, as a documentary filmmaker making the transition?

“I was fortunate to have a DP (Director of Photography) who had shot numerous war stories: “Platoon,” “Born on the Fourth of July,” etc. He was an absolute brother to me. We spent weeks studying every war film ever made and preparing. How can we make it as real as possible? The set designers were also invaluable.” (Everything looks extremely real and extremely terrifying. Cinematography by Robert Richardson, one of 3 living people who has won the Oscar for Cinematography 3 times, for “JFK”, 1991; “The Aviator”, 2004; and “Hugo”, 2011. Set design by Penny Crawford and Karim Kheir.)

You had the real Paul Conrad as a consultant. How was that?

It was amazing! It’s always hard for an actor to have the real- life person there, but the two (Paul Conrad and Jamie Dorman) hit it off immediately.  It really helped us get all those details right. The gallows humor—a lot of that stuff was improvised.”

An example of the “gallows humor”: at a party, Marie hooks up with her last lover (Tom, played by Stanley Tucci) and tells him that his modernistic apartment looks like “Patrick Bateman’s London nightmare.” Also, during one of the most harrowing scenes of constant bombardment in Syria, Colvin looks up from her computer and says, to Paul, “This is the last time I book my vacation on the Internet.”

Had she lived, what do you think would have been next for Marie?

Pick a place! What would Marie Colvin be saying right now since 500,000 people have died since she was killed in 2012? Assad is still in power. It is one of the greatest of tragedies.”

Can you tell us what you hope people will take away from this film—what your commentary is?

“Many things.  A Private War is an homage to Marie Colvin and to journalism and journalists everywhere, for one thing. In this deeply fractured world, truth is under attack. The implications of justice and the cost on our system is incalculable and the system’s effect on Marie and people like Marie should not be overlooked or underestimated.”

There is an outstanding Annie Lennox song entitled “A Private War” that plays at the end of A Private War, which is Oscar-worthy.

Considering that Jamie Dorman is arguably as big a star as Rosamund Pike, the collapsing of his character into the reality that a French photographer was actually killed alongside Marie Colvin makes for under-use of a talented leading man. There is no romance between Dorman and Pike in the film and, while other romances of Colvin’s are portrayed, not letting Dorman do much came off as under-using a good actor. Related question: Where was the portrayal of the REAL French photographer (Remi Ochlik) who died with Colvin?

Still and all, it’s a supremely satisfying film, (especially  as the first narrative film from a documentary filmmaker). It’s as depressing as the ongoing situation  in Syria, but as authentic as Heineman could make it. Hopefully, it may make the world demand an answer to the Syrian genocide of its own people by its dictator leader. [And, with the recent charges that a journalist for the “Washington Post” was murdered within the Saudi, Arabian consulate while obtaining paperwork to marry his Turkish fiancée (ostensibly because he wrote articles critical of Trump and of the leadership in Saudi, Arabia) it might help bring focus onto the dangers that journalists face to bring the rest of the world the truth.