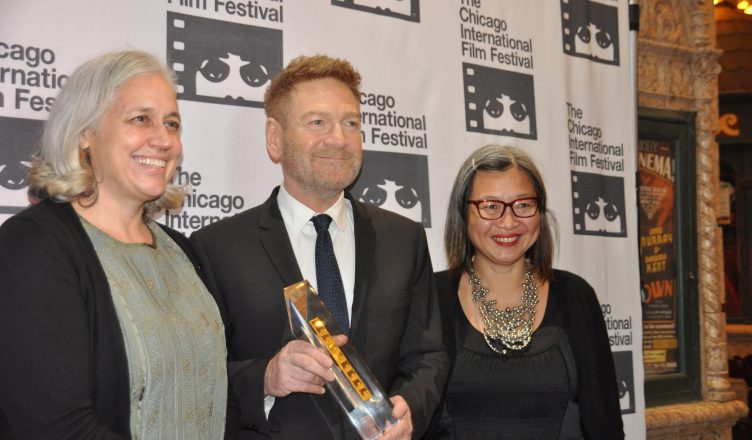 Sir Kenneth Branagh came to Chicago for the Chicago International Film Festival and screened his semi-autobiographical film, “Belfast,” at the 92-year-old Music Box Theater. It was a fitting spot to show  the film, with an organist, beforehand,  serenading those in attendance with oldies like “You Shoulda’ Been in Pictures” and “What Is This Thing Called Love?” The film to follow would be similarly touched by the sheen of sentimentality that listening to an organist in a movie theater evokes and shots of the fictional Branagh family at the movies felt quite sympatico with this opening.

From the stage, following the showing of the film, Branagh thanked the organist for such a grand introduction. He praised Chicago for its “creativity, vitality and generosity.” He also thanked the audience, which had just viewed a highlights reel of Branagh’s many other films, movies which have yielded 5 Oscar nominations in a variety of categories. Said Branagh, “Thank you for watching that reel entitled ‘the history of my waistband.’”

Branagh shared that he had been thinking about making this particular film for half a century.  “It’s about something which happened to me when I was 9 years old.” Branagh revisited “the Troubles,” when Protestants and Catholics blew each other up over Catholic Ireland’s desire to leave the United Kingdom.

After a wide-screen aerial view of Belfast, shot by long-time cinematographer Haris Zambarloukos (“Thor”) in living color, the film reverts to black-and-white and the specific starting date flashes on the screen: August 15, 1969. Men had walked on the moon on July 20, 1969, roughly a month earlier.

Change and uncertainty were in the air and, for Branagh’s family, they would soon make the difficult decision to leave their family and friends behind and move to England. (One wag remarked that it was this move to England that allowed Branagh to lose the thick Northern Ireland accent which American audiences are going to have to deal with. Some have said the film needs sub-titles, much to the amusement of the Irish.)

This was the day that violence came to Branagh’s Belfast neighborhood in Tiger’s Bay, County Antrim,Northern Ireland. It changed  the trajectory of young Kenneth/Buddy’s life forever.  Since it is Branagh’s own childhood memories we are seeing, it is appropriate that the film is shot from the point-of-view of young Buddy (the stand-in for Branagh), played by new-comer Jude Hill.

Branagh recalled, onstage, during the Q&A, how the onset of the pandemic, which also brought fear, chaos and uncertainty, seemed some sort of signal that it was time to make this film. Because the pandemic was raging worldwide, extensive time, effort and money was devoted to keeping the crew safe from the dreaded disease. Not only did the cast operate more-or-less in a bubble, by staying in the same hotel, which led to comraderie, but, also, to the building of sets based on Branagh’s remembrances of his childhood home, complete with barging into similar homes whose owners had volunteered to let the production crew measure each room so that it could be reproduced. (Branagh’s childhood street of row homes was gone.) As he said on Thursday, October 21st, at the 57th Chicago International Film Festival showing, “It was going to be too problematic in the time of Covid to shoot in the real world.”

The director also shared the personal disclosure, “I could never have made this while my folks were alive.” He showed it first to his brother and sister (in real life, Branagh is one of three children), who approved. Memories of having to sign in and out of their row home in Tiger’s Bay and the way the street’s cobblestones had been ripped up to make into a barricade, leaving only sand in the previously paved street, added to the audience’s knowledge. (“I went in for tea, and when I came out, the street was just sand.”)

Some have complained that the couple portraying Branagh’s parents, Jamie Dornan (“Fifty Shades of Grey”) and Caitriona Balfe (“Outlander”), were too good-looking to be “real” parents, but, again, Branagh shared that, in the eyes of a nine-year-old boy, his parents were almost godlike figures. Certainly the two stars have great onscreen chemistry and are extremely easy on the eyes. In one scene, Jamie Dornan sings—again. He’s been singing—and singing well—in other films of late, and, as he sings “Open Up Your Eyes” with flair, just enjoy it.

Director Branagh shared with the audience that the costume/make-up people, in working with the handsome actor and the beautiful leading lady, took them aside and showed them still shots of “the look” envisioned for the duo.  There were many shots of a tousled-looking Brigitte Bardot and a young Marlon Brando—only this young Brando can really sing. Again, the explanation from the director is that, in a child’s eyes, loving parents are quite handsome and larger-than-life.

The acting awards for this one will be rolling in for Dame Judy Dench, who has collaborated with Branagh over six times. She plays young Kenneth/Buddy’s Granny and her husband of half a century is played by Cilian Hinds, who is equally good. The pair are definitely in line for nominations, and newcomer Jude Hill as the nine-year-old protagonist carries the film on his slim shoulders quite effectively. He’s off to a great start.

There’s really not a false player in the entire cast. The charming blonde girl, Catherine, whom Buddy has a crush on is played well by Olive Tennant (it’s a small part).

Branagh both wrote and directed this semi-autobiographical tale. If you can decipher the thick Irish accents, there is both pathos and humor to be found. The film won the Audience Award at the Toronto International Film Festival and the trailer highlights the young boy’s fear that, if he is forced to relocate, nobody will be able to understand him. As one line has it, “The Irish were born for leaving. Otherwise, the rest of the world would have no cops.” Among things mentioned specifically that an Irishman needs to be happy are “Guinness and sheet music for ‘Oh, Danny Boy.’”

There’s even a joke worked into the script (although a really old one), and the gentle back-and-forth ribbing of Cilian Hinds and Judi Dench is both touching and funny, as the elderly grandparents.

Van Morrison did the music: 8 old songs and 1 new one. I learned (from Branagh) that Morrison grew up in Belfast. The 76-year-old musician is known for blending all styles of music. Among his compositions are the song “Gloria” (written when still a member of the group “Them”) and “Brown-Eyed Girl.” Some of the songs that Morrison selected for the film worked in the spot where they were inserted. Some, for me, did not. “My momma told me there’d be days like this,” coming on the heels of a tense discussion between the parents about whether or not to move away from Belfast seemed incongruous, to me. Likewise, when his father is leaving on a bus (to go back to England for work), a jazzy tune plays. There is a frisking in the street and a similarly up-beat song is playing in the background. One critic complained about the use of Dimitri Tiomkins’ theme from “High Noon” as shown on the television set, calling it “incessant.” On the other hand, using “Do Not Forsake Me, Oh My Darling” made a certain amount of sense in the context of the film’s friction between the parents over whether or not to move.

And the use of western influences—songs, posters from things like “Unforgiven” (Clint Eastwood’s western)—was specifically mentioned by Branagh as both an homage to the cinema and providing a moral framework for the young boy. As he explained, “Cinema was a place of escape for me. It was a ritualistic experience.” Branagh specifically mentioned other films he had thought of having the family attend together, beyond the actual use of “One Million B.C.” with Raquel Welch and “Chitty, Chitty, Bang Bang” (which causes Dame Judith to mutter upon hearing the name, ‘Oh, God! Now I’ve heard it all.’). He said that “The Sound of Music,” “The Great Escape,” and “Yellow Submarine” were all in the running at one point, explaining that he wanted one of the sixties movies that had a big-screen Cinemascope feel. The family viewing the Dick Van Dyke classic about the flying car together and then leaning in as though they were really in a flying car was a bit hokey, but appealing in a saccharine fashion and certainly a salute to late sixties state-of-the-art cinematic special effects.

The film uses bursts of color interspersed  in the largely black-and-white film. The opening aerial shots are gorgeous and the color is meant to shock. As Branagh explained it, the color is synonymous with and evocative of creativity.

The movie opens this weekend (November 12th) in theaters and is bound to bring Oscar nominations come March 27th.