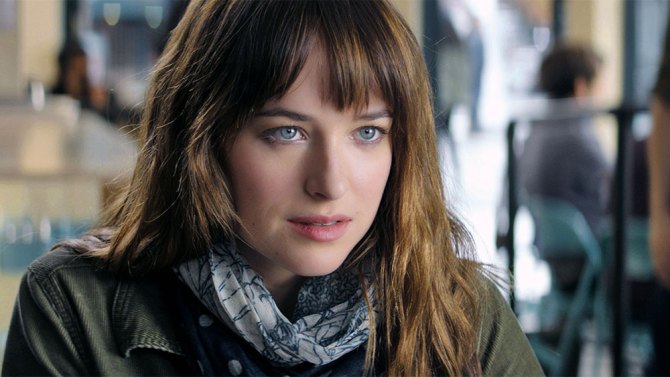 Fifty Shades of Grey has been a worldwide box office phenomenon. Now the movie is available on DVD and Blu-ray, and it comes with a lot of bonus features.

Anastasia Steele is your regular college student occupied by school, work, and spending a night out at the bars. She seems so average that she has to become the object of affection for billionaire playboy Christian Grey. Anastasia or Ana, meets Christian as part of a school assignment. How many college students have this sort of access to corporate moguls? Initially Ana isn’t impressed with Mr. Grey, after all the interviewed him on the behalf of her roommate. Instantaneously, Christian takes a liking to Ana. Her seemingly simple and shy persona must be what appeals to a man who has it all. Mind you that Christian is barely older than Ana.

Christian doesn’t waste any time pursuing Ana. Arriving at her work (hardware store), now what’s a auspicious guy like him doing at a hardware store? Kinda odd. Ana is eventually swayed and becomes smitten with Christian’s pursuit of her. The courtship turns into an all-out sexual affair. The innocent virgin soon becomes a sex vixen, with Christian’s sexual fetishes becoming part of their relationship arrangement. A plethora of sex-filled romps occur. From whips to blindfolds, all leading to the red room (not a room filled with Xbox games). This all-out sexual marathon doesn’t let up.

For all the commercial success of Fifty Shades, the flaws are apparent. The dialogue is simply poorly written. The blame is to be shared by E.L. James as well as screenplay writer Kelly Marcel. The visuals raise the profile of the film. A well crafted, precise, and lavish cinematography by Seamus McGarvey, adds a lot of allure to the film. It just looks and feels upscale. Director Sam Taylor-Johnson does a solid job of focusing on the main subjects, while attempting to link up two people from very different backgrounds.

Dakota Johnson, in her first big budget debut does some brave work. Johnson should be commended for her commitment to the character. As much as she uncovers physically (she bares it all), the emotional undressing is significant. Jamie Dornan might not have been the first casting choice for the film (Charlie Hunnam), but he was a solid choice. He doesn’t do anything exceptionally well, but he also doesn’t fail on any account. There is a bit of a struggle to hide his English accent, but overly detrimental to his character.

TEASE OF FIFTY SHADES DARKER which is a half minute teaser trailer.

CHRISTIANS APARTMENT 360 SET TOUR offers and interactive look at Christian’s apartment. You can click on various objects, or just scroll to get a a 360 view of the place.

MUSIC VIDEOS: SKYLAR GREY “I KNOW YOU” AND THE WEEKEND “EARNED IT”. Additionally a BEHIND THE SCENES OF “EARNED IT”.

E.L. JAMES & FIFTY SHADES is a 6 minute feature about the author and what prompted her to write the book.

BEHIND THE SHADES is a 19 minute feature about converting the book into the movie, and the production behind it. It’s an interesting feature of how this all came together. THE WORLD OF FIFTY SHADES OF GREY is an in depth look at Christian Grey, Ana, and Friends and Family. This feature allows you to profile the characters, as well as the actors playing them. Fans and first time viewers can get some good insight into the actors and characters, and come away with a much clearer understanding of both. Detailed and informative, probably the best bonus feature on the disc.

CHOOSE A MOVIE VERSION allows you to select the theatrical version, or the more risque unrated version not shown in theaters.

The special features are loaded, with hours of material, there isn’t much more to be desired.

Overall, Fifty Shades isn’t just a movie for women. I think men can find some fun in it (not only for the sex). It’s not a great movie by any means, claims have been made that it’s mommy soft-core porn, but it’s not necessarily that. An expensive Lifetime movie, with added glitz, glamour, and sexuality. The movie has made money for a reason- the concept sells. If you haven’t read the books or seen the movie to this point and are curious what the hoopla is all about, it’s worth checking out the DVD. The Blu-ray features might give you better insight than the movie itself, so get the Blu-ray combo instead.

Who Cares About Dialogue With Those Visuals

One thought on “DVD/Blu-ray: Fifty Shades Leaves Little To The Unknown”