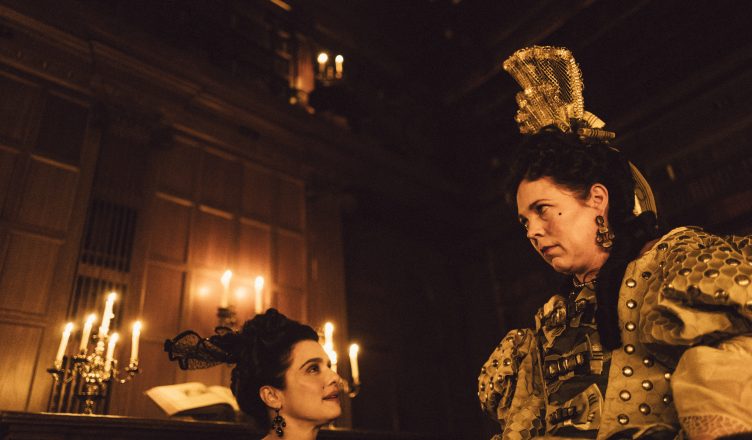 Emma Stone, Olivia Colman and Rachel Weisz play the force-field of powerful and complicated women in “The Favourite,” Yorgos Lanthimos’s twisty, perverse and decidedly unconventional period piece set in 18th-Century England. The tragic-comedy from the director of “The Lobster” and “The Killing of a Sacred Deer,” kicked off the 56th edition of the New York Film Festival Friday night at Alice Tully Hall.

In the Greek director’s introductory remarks before the sold-out 6 p.m. screening, which was also the film’s U.S. premiere, he told the audience, “This is the biggest cast and crew turn out for any of the screenings, so you can imagine how excited we are to be here.” (The film premiered at the Venice Film Festival where Colman won for best actress.)

Then Lanthimos brought on stage stars Stone and Colman (Rachel Weisz recently had a baby and did not attend), cast members Joe Alwyn (his girlfriend Taylor Swift attended the screening by a side door and. later attended the after party at Tavern on the Green) and Nicholas Hoult, along with renowned costume designer Sandy Powell and co-screenwriter Tony McNamara.

“Take a good look and enjoy the show,” said the impish director of the impressive group on stage.

All eyes were on Stone and Colman. Colman, with her dark pixie hair cut, looks very different from the debauched Queen Anne she plays in the film, and she’s newly popular for her upcoming role as another monarch in the next iteration of “The Crown.”

“The Favourite” is loosely based on historical events during Queen Anne’s reign (1702-14). Frail and befuddled, Queen Anne was sick with gout and grief, so she turned to her closest friend and confidant, the steely Lady Sarah Churchill (Weisz) to run the court and country while she overate and played with her bunnies. The wheel turned when Sarah’s cousin Abigail (Stone) arrived on the scene and began scheming her ascent from chambermaid into inner court and challenged Sarah for the Queen’s affection and influence.

Amid racing ducks, rampaging rabbits, maquillaged men in towering wigs, “Dancing With the Stars”-style voguing — not to mention illicit lesbian sex — what’s not to adore about this perverse take on the psycho-sexual-political dynamics of the court and its modern-day ramifications? Witticism and zingers fly so stealthily in this clever script co-written by McNamara and Deborah Davis it takes a nano-second or two to keep up.

As to what attracted him to the story, the director replied, “The fact that it was a story about these three women that in a particular point in time had this kind of power but also their character and personality and how that affected a whole country and the fate of millions of people.”

Other highlights from the press conference included a hard-hitting question from a journalist about working with the rabbits. In the film, Colman’s Queen Anne refers to her beloved animals and says there are 17, representing the seventeen pregnancies she had by her husband George, that resulted in 12 miscarriages or stillbirths, four infant deaths and a sick son who died at age 11.

“How did you work on a set with that many rabbits running around?” the director was asked.

Colman, who figures in all the rabbit scenes, said key was “to keep them in the corner, in a pen.” There are, it seems, such things as rabbit wranglers and they were on set. “Keeping them in the camera angle was the biggest problem,” she said.

Lanthimos added, “I was  surprised. It was very simple. It just fell into place most of the time. The only thing we had to do, as Olivia said, was just to restrict where they were because there were two rooms. I thought it was going to be a nightmare but they just seemed to enjoy themselves and hanging out and it all fell into place.”

Unlike the director’s previous films, no animals seemed to be hurt or injured in “The Favourite,” although there is one anxiety-inducing moment where Stone’s character comes dangerously  close to grinding her heel into a bunny’s back. The rabbits have some key scenes, including at a bunny birthday party. And in the lavish scenery and exquisite period detail you can see their little bunny turds all over the wooden floors and overstuffed bed.

The costumes in “The Favourite” are spectacular and should earn Sandy Powell a 12th Academy-Award nomination; she’s already won three. The spritely red-haired designer was in the audience and jumped on stage to talk about her costumes, which, she noted, are “primarily in black and white and historically correct in the cut.” The fabrics, however, were modern which adds to the absurdist bent of the film.

Stone said the costumes were vital in informing her performance. “I never wore a corset before,” she said. “It does prescribe the way you stand in a certain way and walk in a certain way to stand up right,” which the actress said was “helpful” in finding her way into her character’s resolve for upward mobility, adding,  “There was a lot of leather.”

As for preparation for the role, Colman said they had weeks of rehearsal. And all the actors talked about what “ a good time” they had making the film. “We danced every morning to get in the mood,” said Hoult.

Stone added, “I’m the only American in the cast and not aware of English history,” and she did “a bit of research, or as much as she could find about Abigail… Their relationship wasn’t clear.” (Sarah wrote a memoir inferring that Abigail and the Queen had a lesbian relationship.)

And it turns out that even though she’s an Academy-Award winning actress, Stone still had to audition for the part of Abigail. She turned to the director and said, “ You had me pant like I was giving birth, just throughout the lines.” This even though her character isn’t pregnant in the film. “I think he just does this to everyone,” Stone said.

“Not the birth part,” quipped the director.

“The Favourite” joins a very fine line up of films the NYFF has selected with central female roles although one could wish for more films directed by women. The strong, female-centric films I’ve seen so far include, “Cold War,” “Her Smell,” “3 Faces,” “Ash is Purest White,” “If Beale Street Could Talk” and “Wildlife.”

“The Favourite” opens in theaters November 23.