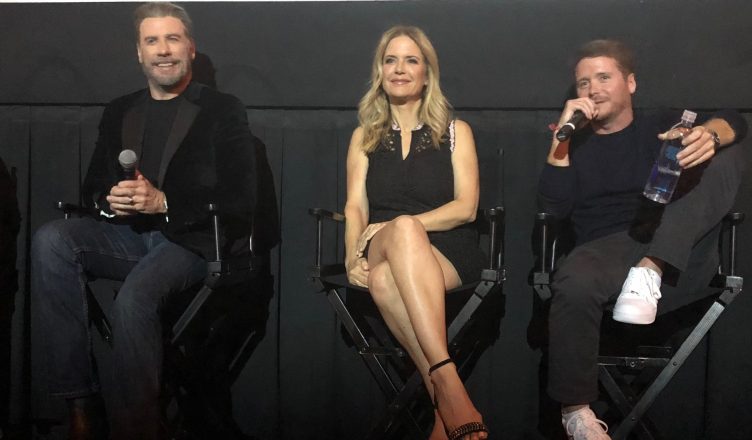 Gotti, John Travolta’s passion project about the late mafia don, opened Friday and got whacked by the critics. The New York Times called the John Gotti biopic a “mess,” and the New York Post reviewer said he’d rather wake up with a horse’s head than have to see the movie again. 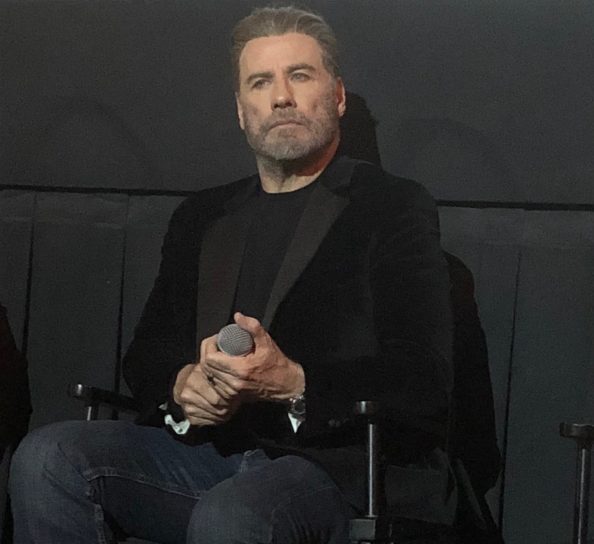 Travolta has been tireless in promoting the film and his performance as the late mobster. He turned up Friday evening after the 7:15 screening at the AMC Lincoln Square in Manhattan with wife Kelly Preston, who plays Gotti’s long-suffering wife Victoria and director/“Entourage” actor Kevin Connolly, for a 45-minute Q&A for adoring fans. Travolta was flanked by two large security guards, but fans still managed to approach the actor who smiled and posed for countless selfies.

The movie is mainly a sympathetic look the mafia leader or as favorable as it’s possible to be to a gangster who murdered people but loved his kids and was also loved by his neighborhood.

The movie took eight years to make and went through three or four directors, countless cast members, producers and even several distribution companies. Travolta has been the one constant. His strongest scenes take place in prison between him and his son, John Gotti Jr. (Spencer Lofranco), who wants to get out of the mafia life and talks to his father about taking a plea bargain.

Asked during the Q&A why the movie took so long make, Travolta replied,

“Well you know, historically a lot of great movies take many years to make. I know ‘Forest Gump’ took ten years to make. It’s not that unusual, but I just felt that it was worth the wait is all I’m saying. Yes it took eight years but we had more time to investigate how the family lived, how they behaved. They were 24/7 helping us. You wouldn’t believe how John Gotti Jr. was on the set every day quality checking the performances and details, so it was worth having all that time to do it right,” he said. “And you know to get it right because we’re familiar faces so we have more of a duty to disappear into the character than another set of actors might. We have a duty to the audience and the family to become those people and not really reflect ourselves.” 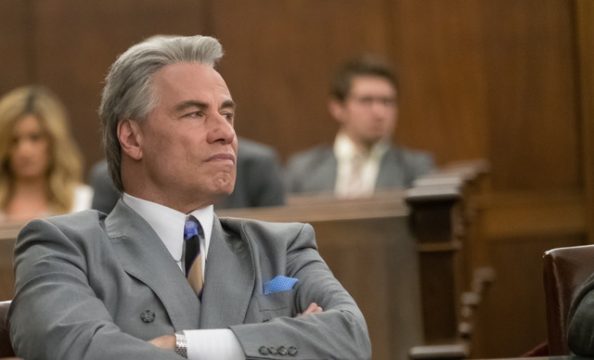 Kelly Preston said she spent time with Victoria who was helpful to her in getting the details right. “She was amazing first of all… She invited us over to the house and cooked us a beautiful Italian meal. We stayed there all day. Family was coming in and out and we could ask for anything. That was amazing…I became friends with her on email… I asked her questions, like what were you feeling? What did you go through?… She gave me her jewelry. She gave me her wedding ring to wear….”

Travolta aded that Victoria even lent him some clothes to wear, including a brown suit. “His cologne was still on the suit I borrowed… Another interesting thing I think is that this movie is almost 100 percent verbatim what happened historically, the dialogue, the settings, everything.”

Travolta said the thing that surprised him the most about Gotti and his relationship with his family as opposed to the public perception of him was that home he was just a regular guy. “I needed to know why he was so loved in his neighborhood…. The newspaper accounts were very apparent… But he was almost like an insurance policy for your small business. He financed group celebrations, families that weren’t doing well. He was almost like a Robin Hood… It was such a direct dichotomy to the rough behavior and violent life that he led, so that’s why I think the people loved him.”.

Gotti did a lot of bad things, the moderator pointed out, asking Travolta if he thought he deserved the hero persona in the streets of New York that the movie presents?

“First of all I’m playing a movie (character) from his viewpoint,” said Travolta. “I have no right to judge him or make him personable. I have a duty to perform his part, so I can’t get into moral judgment.” The crowd applauded enthusiastically.

Noting that the screenplay was based on John Gotti Jr’s book, “Shadow of My Father,” Travolta added, “Our jobs as storytellers and filmmakers is telling the story through their eyes. Like it or not this is how they felt about their father… This is not a glamorized look at his life,” said the actor, adding that the movie didn’t stint on gory details and shows the final days of the mobster and his deterioration from cancer.

Asked for the family’s reaction to the film and whether it was cathartic, sad, and maybe even freeing, Travolta replied,  “It was all of that… There’s always some relief when you tell the truth. And everybody’s truth is different but we told their truth.”

Preston said that John Got Jr. has seen the film several times but that Victoria and the daughters have never seen it. “It’s very difficult for Victoria to see it right now so John has said… Victoria told her it was a very tough life… She grew up very poor and met Gotti when she was 17 and had to raise the kids alone when he was in prion.

Travolta asked the audience: “How did you like the music?”

Travolta noted much of the music is by Pitbull, who is credited as Armando Christian Perez. Travolta said the singer saw a scene from the film —  “It was the courtroom scene where I kind of look identical to him (Gotti)” — and called him up and asked, “‘Would you let me write a song for the movie?”… We hopped on board with great enthusiasm,” said Travolta. 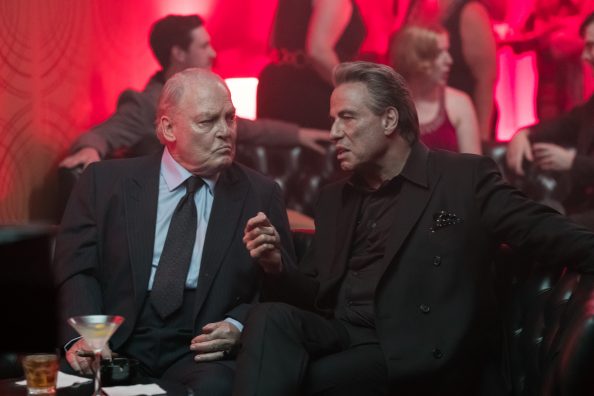 “We needed it,” added Connolly, who said they had a small budget and shot the film in 22 days.

Connolly said he had a question for Travolta, and asked the actor if he was scared at all on the first day of the shoot to finally be bringing the character to life?

“No because I think if you do your homework and you build your character and you start to own the character you can assume the being of that person in a second,” he said. “But there’s no reason to get scared because I felt like I was ready already. You know, let’s go!”

The theater was packed, with audience members shouting out questions for the star.

The first one was about Travolta’s star-making role as Tony Manero in the 1977 dance-drama “Saturday Night Fever.” 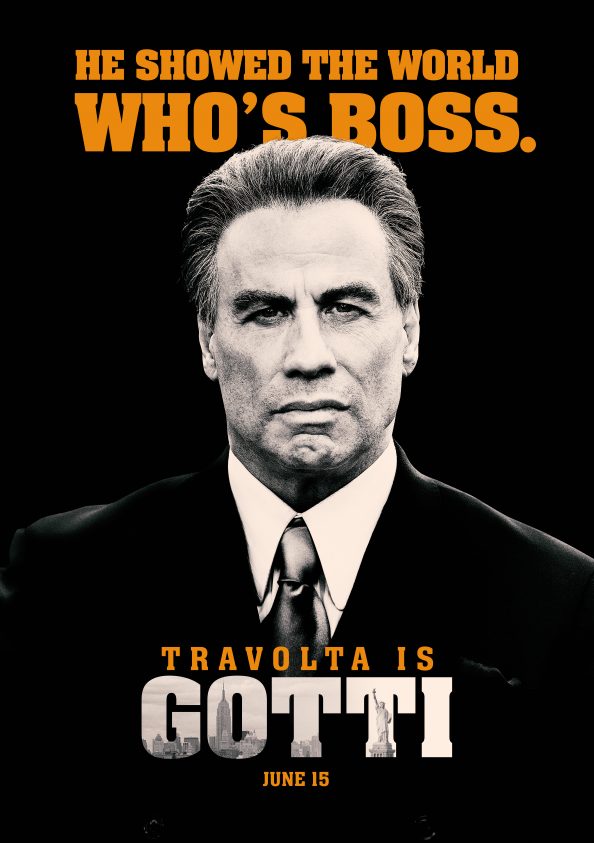 “Tony, he was a thinker and a dancer,” said the actor, adding that to nail the character he hung around with a lot of the guys in Brooklyn. “I would see how they operated. I really spent time with these guys to think how they thought about dance, how they thought about women, how they thought about their group and all that, so it was not dissimilar to any role that is different from what I think my persona is. You have to own it. And operate from that perspective,” he said. “It was kind of a brave movie to do at the time because no one had danced in film for years. I had Gene Kelly and Fred Astaire on the phone saying, ‘Kid, this is awesome.”

When someone in the audience favorably compared his portrayal of Gotti to Marlon Brando in the Godfather, Travolta replied, “There’s no one who would be happier that Marlon Brando. He was a good friend of mine for five years and he would be the happiest of anyone.”

What are the roles he still wants to play someone asked?

“I feel like I’m a muse for writers. I like portraying what they come up with but one role about Vince Lombardi was offered to me and I think that would be an interesting role to play. My dad actually worked with him in football years ago and that might be another Italian I’d like to play.”

Cracked Connolly, “You know I know a lot about football…  I’m just saying.”

Then Travolta praised his director and explained why he chose him.  “There were three or four other directors, but Kevin was the first one who was so in love with the history of this family and the history of the mob that I felt his vision would actually come to fruition and that’s why I was enthusiastic about Kevin doing it. (Also) he was my favorite actor in ‘Entourage.’ He just nailed it.”