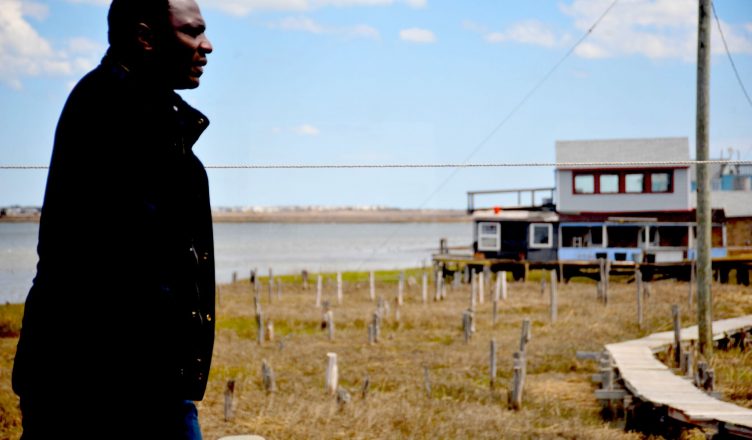 I have one primary takeaway after having seen the new movie “Wetlands”, opening in theaters on Friday, September 15.  Adewale Akinnuoye-Agbaje (TV’s “Lost”, “Suicide Squad”) can carry a movie.

Oh, veteran pros like Jennifer Ehle and Christopher McDonald are just fine here, too.  But it is the simmering beneath the surface Gary Cooper/Clint Eastwood kinna cool of  Akinnuoye-Agbaje’s character “Babs” Johnson that sustains this flick as being worth the watch.

Johnson was a helluva Philadelphia cop who descended into hell.  He then self-banished to a decrepit shadow of the once glorious gambling mecca of Atlantic City to make amends for a family life he completely annihilated in a selfish haze of drugs and booze.  And all of the resultant drama plays out amidst the onslaught of a killer hurricane the likes of which AC and the surrounding desolate wetlands have never seen.

The pace of the script and exposition are kept cruising along with reasonable fluidity by Writer/Director Emanuele Della Valle.  And the sense of isolation and dread in the face of enormous natural disaster carries requisite impact.

The ending, while furnishing a big reveal and not all together uncool, could have gone for much more of a wallop than it settled for.  But taken as a whole, this is a story and a production that offers a bit more than standard mystery fare usually provides.

One, Della Valle chose to use generic standard football action footage to pass as a pro game featuring the Philadelphia Eagles.  Bad call.  While it’s understood that NFL licensing rights would have been way out of budget for a small independent production, it still came off looking schlocky and cheap and should have been kicked out of the film.

And finally, a regrettable lament from a guy who has paid a visit, and not all that damn long ago, to the town during a day when it was a hoppin’ and happenin’ place to be……

What the f— ever happened to Atlantic City, man?

"Wetlands": A Leading Man is Born

I have one primary takeaway after having seen the new movie “Wetlands”. Adewale Akinnuoye-Agbaje (TV’s “Lost”, “Suicide Squad”) can carry a movie.