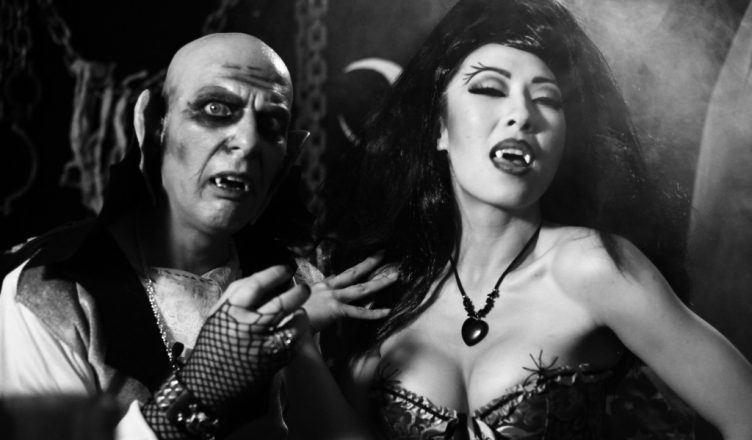 A look behind the scenes of an indie production, by David Black

Have you ever been curious about what goes into the making of an indie TV show pilot?  Well, a few months back, an enthusiastic group of talented people from the local movie industry gathered at my small flat to shoot a hosted horror show called Horror House.  As you can see from the pics, it was a very low budget affair.  What we lacked in funds, we more than made up for in creativity.

I don’t think anyone involved would have been too disappointed if it hadn’t gone anywhere because at this end of the scale, sometimes you just work on things for the experience and the enjoyment of being with other creatives.  I’m extremely happy to say that the show was actually picked up and will air nationally in Australia in 2018 on Foxtel Aurora.

Please enjoy this article that I wrote very soon after the big day’s filming. 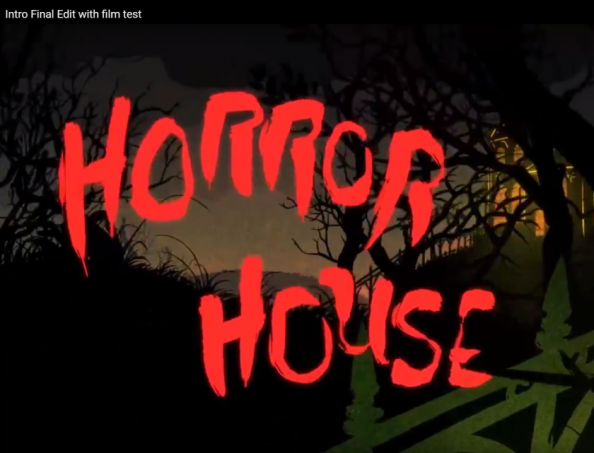 One of the things I’ve been working on is called Horror House.  It’s a hosted horror show that is reminiscent of the old ones with all the bad taste jokes and props.  Australia used to have these in most states. Sydney, Melbourne, Adelaide, Perth and Brisbane all had one called Deadly Earnest.  Each one had a different actor and the characters they played varied quite a lot, despite all using the same name. The shows ran from around 1961 – 1978 and were extremely popular.  I chose to have two hosts for my show.  Count Funghoula and Mistress Boobiyana. 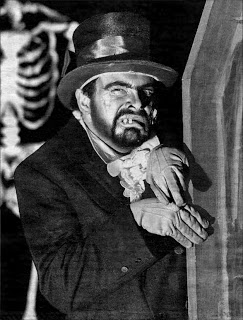 The reason why I decided to create a horror show was due to seeing so many Aussie short horror movies that were amazing.  Most only had youtube as an outlet and were unlikely to get onto TV or be released on dvd due to being too short.  I thought that if there was an old style hosted horror show, then these could be grouped together and put into a half hour or one hour episode.  I mentioned this on my facebook as a status update and the idea just took off.  Before I knew it, I had all the talent needed for the show to go ahead. 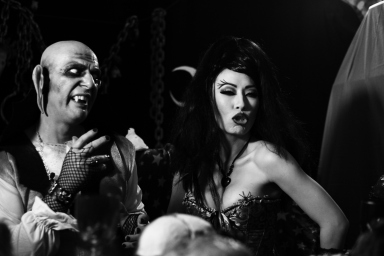 The amount of work that goes into creating something like this is substantial.  It was absolutely mind blowing as to how much time goes into pre-production,  in order to create just a few short minutes of footage.  This project deepened my appreciation for all of the local films that I’ve seen.  I’m hoping that by going over some of this, that it will help deepen your appreciation too. 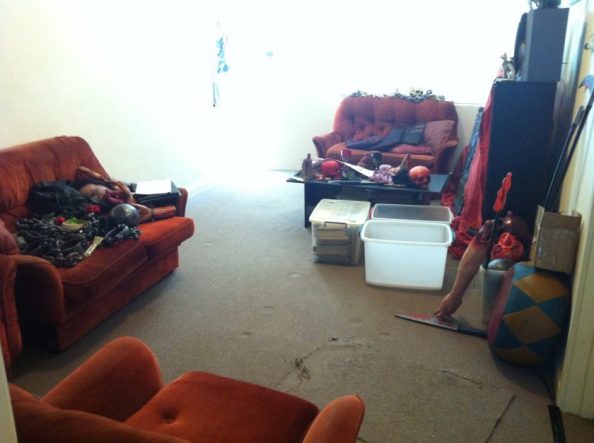 The first thing that I did was to commission an animated intro and outro for the series.  I felt that to get the film makers to give me their best work that I would need something spectacular to show them.  I went with Lorne Colt as the animator, and we worked remotely via email and facebook. This process took around a couple of weeks. The music in the intro was taken from an instrumental section from one of the songs I created with my band, Darkness Visible. 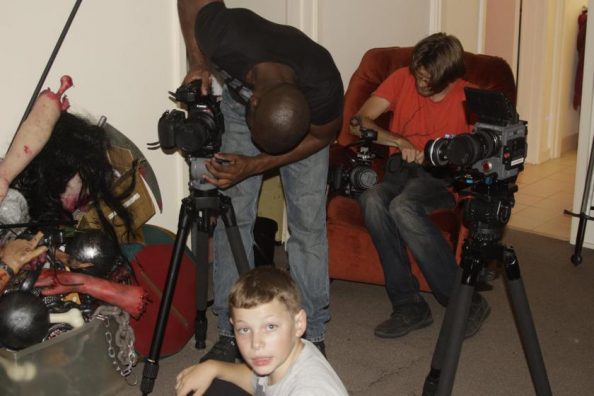 The next step was to look for short movies.  I put messages up on a number of the facebook groups that are dedicated to the local indie movie industry.  To select the films for just the pilot show was another 3 weeks.  It was fun to chat to so many film makers and watch their movies, but, it wasn’t all beer and skittles.  I did get the odd film maker that was not happy that they didn’t make selection.  So I made a few friends and gained a few enemies.  I was advised by so many colleagues that have been working at the higher levels of this industry for years that you have to develop a thick skin if you want to be a director/ producer, and I’m working on that. 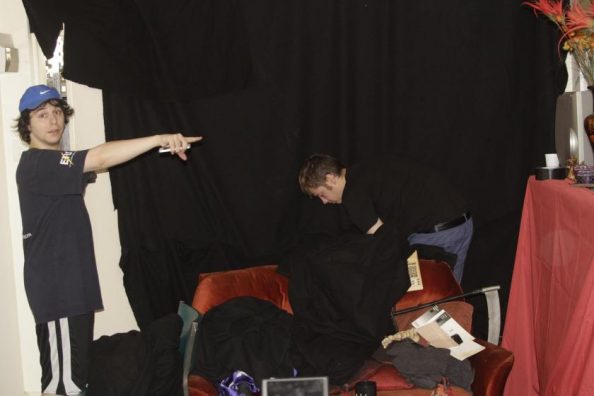 While selecting the movies and writing the script, I was putting together the cast and crew.  Most that work in this industry at the indie level are highly dedicated and often work on a volunteer basis, or for token payments. That doesn’t mean that the project was going to have a zero cost because the animation was already a few hundred dollars.  I recruited the cast and crew over a few nights.  I’d end up in long discussions with this one or that one, until late in the night over the next few weeks to get all the workflows and deadlines together, as well as getting all these talented people working with each other. 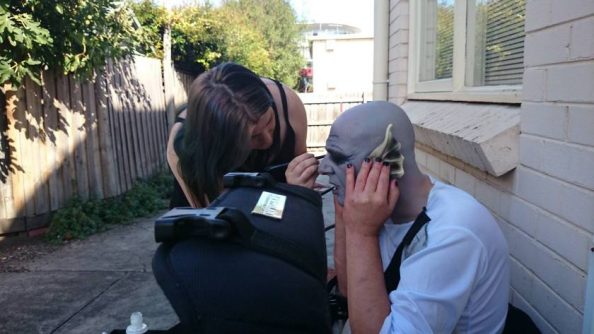 There’s a long line of tasks that need doing on a project like this and each person does their bit and passes it onto the next.  It only takes one person not coming through and one work flow can get jammed up, causing delays in many other areas. Yep, I had this problem too, and ended up having to replace my original co host. This resulted in another person upset, more fights, false accusations and the loss of friends that I’d introduced to her, who just couldn’t accept that I was now a director and had a job to do.

By this stage, I was really starting to appreciate the blood, sweat and tears of local film makers and understand some of their war stories of difficulty with cast and crew.   I didn’t quite get to the nervous break down stage, like some, but this was just a one day shoot and not a full feature film. 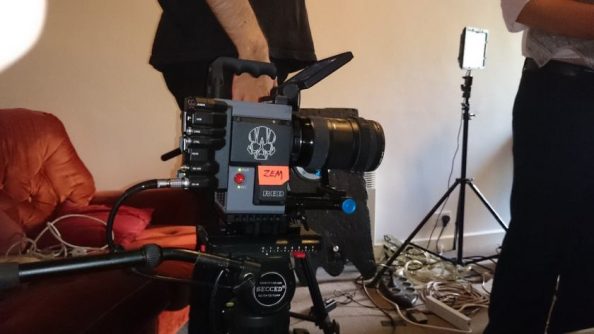 It was a learning curve for me to realise that I should have had auditions and then made short lists.  With anyone selected, I should also have followed up with the directorsthat they’d worked with before to make sure that they were professional in their behaviour.  I realised that you can’t just do a movie and give friends parts if you want to have a decent chance of having a smoothly run project that will be produced to a professional level.  It was a hard lesson, but in retrospect, I am glad to have learned it early. 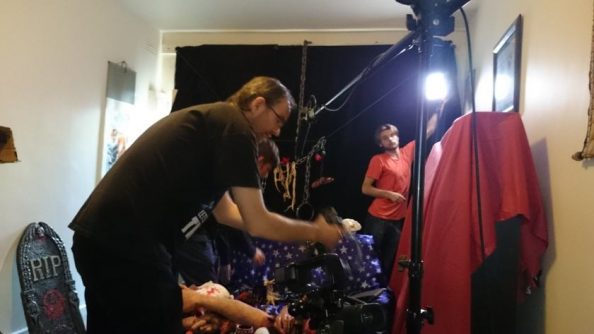 Once the previously cast hostess had been replaced, things moved into high gear. The new Mistress Boobiyana was Tritia DeViSha.  She is an award winning actress, seasoned presenter, producer, as well as a writer/director/filmmaker.   Tritia immediately got us rehearsing, filming the practice runs, re scripting and discussing props.  We were able to share the footage to the work group where the crew were able to decide what equipment they’d need and their methods of shooting it. I was now getting a better understanding of how much more needs to be done and the way to do it. 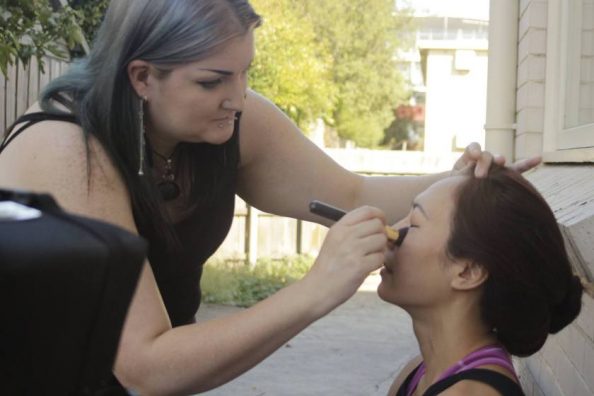 Discussions of make up and costume now got underway and it was probably a week or two of the make up artist discussing in online chat the ideas with Trish and I.  Sketches and pics were exchanged, discussed and altered.  By the time we went to shoot, we knew what we were doing there but were ready to make whatever alterations would be needed on the day.  And as usual, things do change. There is a helluva lot of thinking on your feet that goes on as you have to accommodate things that just didn’t quite go to plan. 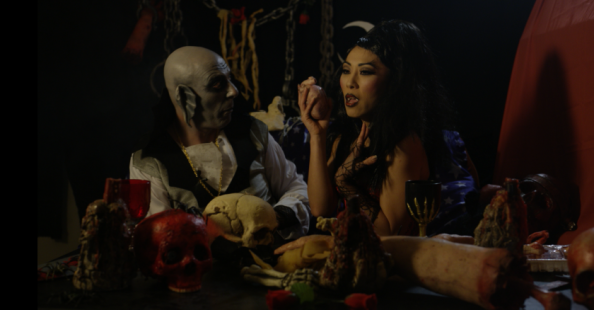 For a week before the big day, I was moving stuff out of my lounge room, getting props together, keeping contact with everyone and even arranging extra helpers for the day.  Even then, on shoot day, there was heaps to do, but we transformed a lounge room into a movie set and got our footage done.  All up, I would say the amount of hours I put in alone would equate to two weeks full time, jammed into after hours.  Costs involved would have been around $600 – $700 . And that is just pre-production and the one day shoot.

More updates will be available on their facebook page – http://www.facebook.com/HorrorHouseShow/