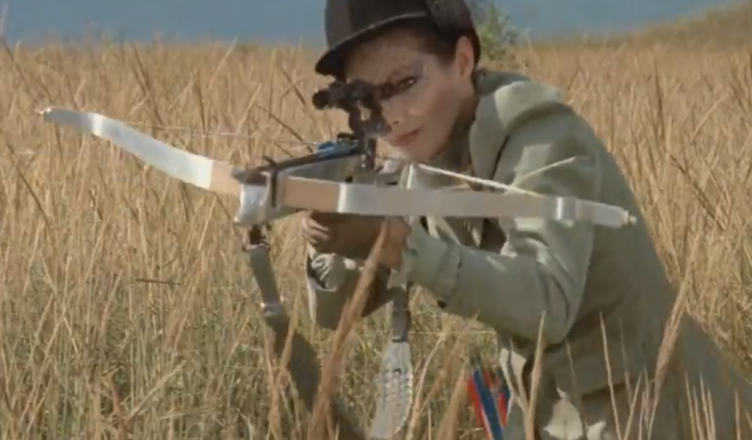 Hi Everyone.  Today I’m going to be reviewing a movie from the golden age of Ozploitation films. Turkey Shoot came out in 1982 during the time when the Australian film tax exemption scheme, 10BA, offered generous tax incentives to encourage the creation of local movies.  The 1970’s and ‘80’s saw many low budget cult movies being made such as Mad Max, Dead End Drive In and Razorback.  It was an exciting time and many of today’s local indie movie directors can only dream of having budgets of 2-6 million dollars.

Although some movie fans feel that we’ve had our heyday and choose to live in the past, I believe that Aussie indie cinema is currently going through another explosion of creativity.  One actor who bridges the eras is Roger Ward. Roger was in Mad Max and plays “Chief Guard Ritter” in Turkey Shoot.  He is also active in today’s Indie movies.  Turkey Shoot was remade in 2014 where Roger played “the dictator.” I asked Roger if he could say a few words to lead into my review on the 1982 version.

RW – As far as Turkey Shoot is concerned, It was just a damned good fun shoot.  We shot in Cairns for about 4 weeks. I was unsure of the end result, as one is with all films, Mad Max included, you just do the best you can, with what you have in the way of script and crew, and hope for the best. Not that the end result, good or bad made any difference to us actors as we only ever received residuals when we shot with the yanks, the Aussies never gave them, not up until this date anyway, but a good actor, or dedicated one, will never walk through his part, and for that I am grateful, for one was unaware during those days, 30, 40 years ago that those films we were working on would be cult films today.

DB – Can I use that at the start of the article? Its’ well written. 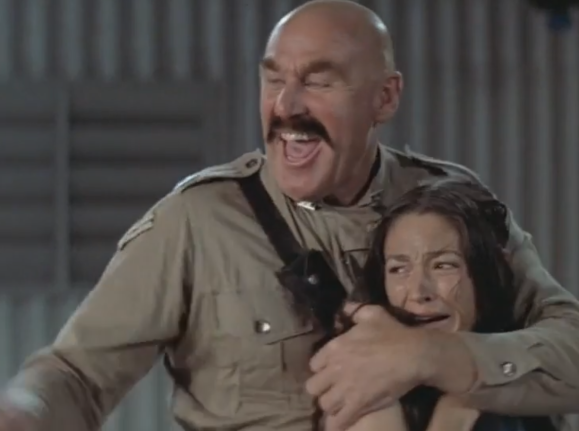 RW – Sure, use it if it will help.  You could also mention that there is talk of 20 or so pages of the script being ripped up owing to budgetary constraints, that is true, but it hardly made a difference to the directing skills of Brian Trenchard Smith with whom I had worked throughout his early days, on doco’s and shorts and who has a very creative and intelligent mind and could probably make a block buster from the telephone book.  So while the statement is true, it had no effect on the end result of the film, just a little difference in the story line.

DB – Your character in Turkey Shoot was such a strong character.  I remember the indie comic, “The Dazzling Career of Gary Goo Goo Gillespie” having a tennis coach in military gear that was a dead ringer for your character.  The page was drawn by Dave De Vries. 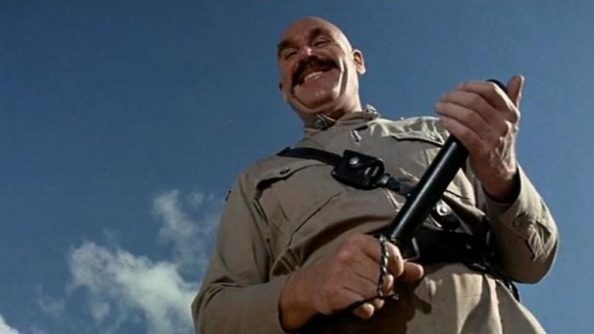 RW – I’d like to see that, the tennis coach thing.  But this www is amazing to see the characters from all over the world that dress like some of the characters I’ve played.  In fact I went to Japan last year for a Mad Max Convention and was met by three Fifi look alikes, all Japanese.  Quite a sight but nice.

DB – How do you feel that the indie movie industry today compares with film industry back when Dead End Drive In, Turkey Shoot and Mad Max were being made?

RW – In answer to your question Indie Movie today etc… I was only saying to Richard Wolstoncroft who wrote and directed Debt Collector, that the indie industry is emulating those glory days that I mentioned earlier, the 70’s with Stone and The Man From Hong Kong, Irishman and Mad Max. The 80’s with Turkey Shoot and Quigley Down Under, in fact in those days we were going from one film to the next and then it died.  But now, within the last 2 years I’ve chalked up, six films and I have two more to go this year, so I have a bubbly feeling that there is light on the other side of the tunnel that we’ve been in filmicly since the end of the 80’s

DB – Thanks for helping me out there. I’ve been a big fan ever since I saw Turkey Shoot. But I have to admit that I went to see it initially because I had a crush on Lynda Stoner. 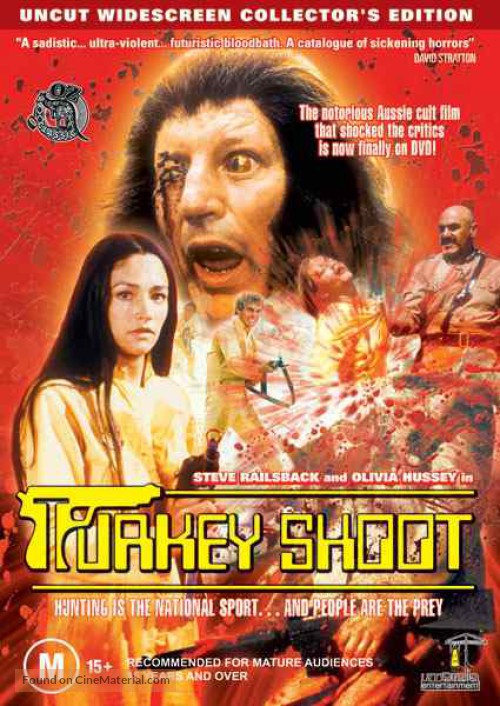 After that, it gives away too much of the film and the last thing I want to do in this review is give spoilers. I just want to say enough to do it justice and then let you see the movie for yourself.  Before I saw it at the cinema, about all I’d seen was the trailer on the tv.

IMDB describes the movie as – “Deviants are held at a rehabilitation fortress until they’re set into a deadly game of survival, in the hopes of returning to world society.”, and that’s probably enough background.

Turkey Shoot certainly is a wild, new world order/ totalitarian, dystopian movie.  It starts off with the usual break down of society scenes taken from news footage. This is during the opening credits though, so it is enough to set the scene without getting us bogged down into the same type of opening that many other movies have since used. Despite this type of introduction having since become cliche`d, in it’s day, this was pretty amazing and even now it still gets my heart racing.

If you’re looking for a movie with all the action, guns, explosions and way out characters of Mad Max 2, then Turkey Shoot will not disappoint. Rather than a desert setting with a run down oil refinery, we’re in the jungle this time with a futuristic prison camp. This gives us the perfect opportunity to have the obligatory nudie shower scene. You can’t have a decent exploitation movie without boobs and gore. And this one has both, as well as a great big hairy mutant!

Turkey shoot is well paced, keeping you involved by moving through different scenarios whilst always keeping the tension and cruelty coming. It’s edited well, so you can easily follow the movie.  The jungle scenes make Tarzan movies seem a bit lame as our main characters are pursued relentlessly and fired on by all manner of weapons by a larger than life group of over privileged, sadistic, nobles.

Interestingly, a lot of reviews I came across panned the film. Even actors within the movie described it as grotesque. This was possibly due to the gore and cruelty of the time. By today’s standards, it’s a bit tame in those areas. Shows such as The Walking Dead and Game of Thrones have well surpassed this in gore. Game of Thrones, Spartacus and a few bazillion other shows are way heavier than Turkey Shoot when it comes to nudity. I think this attitude really comes down to Australians themselves.

I went through this same bullshit when I was a cartoonist trying to sell my comic, “Punkz In Space.” Australian newspaper editors would be afraid that the idea of punks in a comic could be offensive. Within a couple of years, The Simpsons, Ren & Stimpy and others were flooding the Aussie market and Punkz in Space seemed very innocent. Turkey shoot is not some third rate grotesque movie. The only thing bad is our cultural cringe. 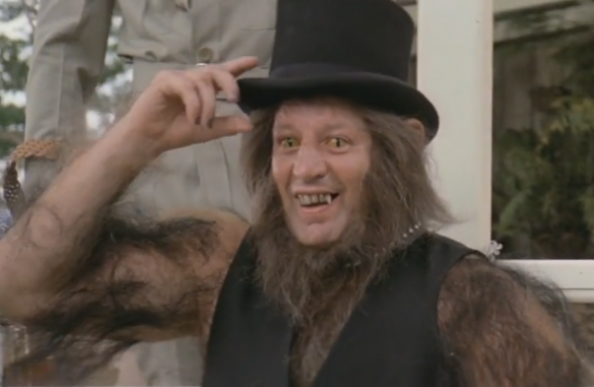 As far as the Ozploitation tag goes, I can only say that it was Ozploitation in its day. If it came out today, and from the USA, it probably wouldn’t get the “exploitation” tag at all.

Stand out performances are by Roger Ward, Lynda Stoner and Noel Ferrier. The one drawback I found was the usage of overseas actors that so many Aussie directors feel are needed if they wish to sell their movies internationally. I really couldn’t say that Olivia Hussey or Steve Railsback brought anything special to the movie. Both were good, but it’s our the local actors that really shone through. This isn’t a dig at overseas actors. 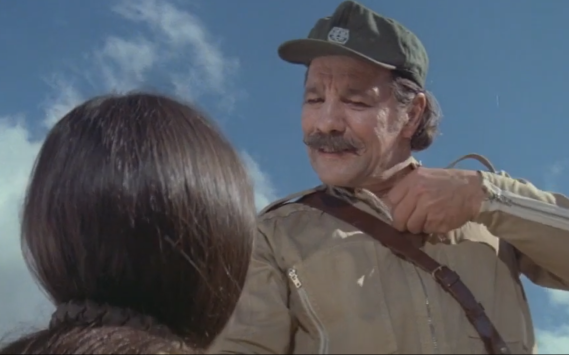 There were plenty of locals, such as Gus Mercurio, that were born overseas and settled here. I just felt that Olivia and Steve were patchy in their performances.  As the movie goes on, they really come into their own and deliver some amazing scenes, however, they start off so wooden that some viewers might be tempted to just turn the movie off.  All up, the movie is an enjoyable watch from beginning to end. In fact, if you are into Aussie movies and like a bit of sci fi/ action, then Turkey Shoot is a must see. 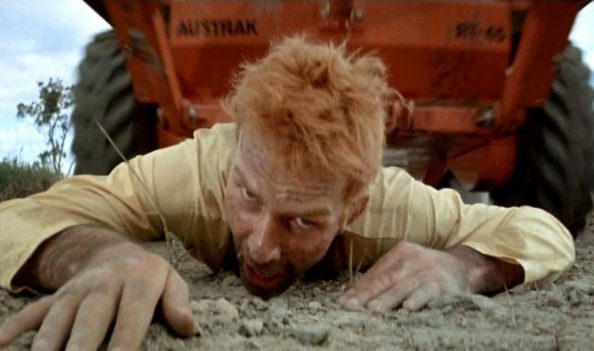