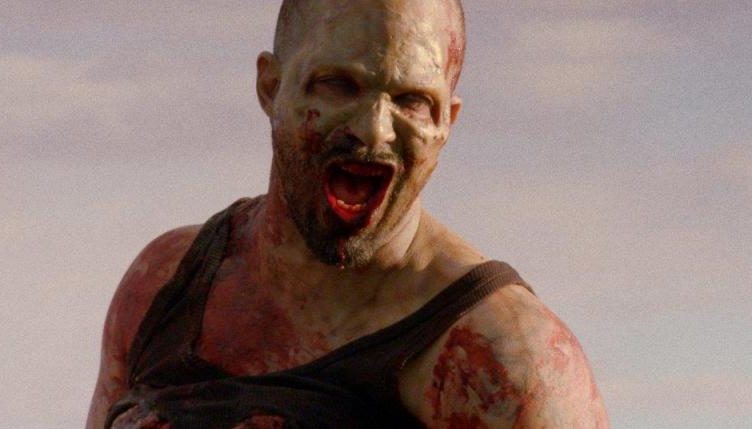 It Stains The Sands Red

I had seen the trailer for It Stains The Sands Red a few weeks back and thought it looked interesting and unique.  Once I found out It Stains The Sands Red was on video on demand I had a quiet evening one day and thought I would watch.  WOW!  I was not disappointed at all!  I love movies that get right to the action.  Within the first ten minutes of this film I was hooked.  Zombie movies can be cliché but this one was very original.  I have not seen a concept like this before and this film is all kinds of terrifying.

The main character Molly finds herself alone in a desolate desert with a blood thirsty, flesh eater on her tail… and its just one.  Not tens or hundreds like you see in other zombie movies.  Somehow just one flesh eater makes it that much more frightening.  I kept thinking that all Molly had to do was get Smalls down somehow and smash his head in with her platform shoes!  But what’s the fun in that right?  Oh and she’s also on her menstrual cycle.  Yeah, she’s just not in the mood for anything (ha!).  I should mention that her period plays a part (somewhat) in the movie.  That’s why I bring it up obviously.  Whether in the day or in the night or during a sand storm, Molly can’t seem to get away from Smalls.  Oh yeah, Molly named the zombie.  She named him Small Dick, Smalls for short.  That seems plausible right?  Naming your potential murderer.  I mean, she was coked up and delirious so I’d say it made sense that she did that.  Plus, as the film went on we start to learn more about Molly and why she is where she is in life.  She’s definitely a lost soul.  It’s evident in her conversations with Smalls that she is trying to figure her life out and where she went wrong.  Weirdly, Molly and Smalls form a connection.  They save each other in an odd way.  I guess you’ll have to see the movie to know what I’m talking about but it was really an awesome thing to see.

Brittany Allen was fantastic as Molly!  She went from one emotion to the other flawlessly.  After the movie was over I googled her to see what else she’d been in.  She was in another zombie flick back on 2012 called Dead Before Dawn which was actually pretty funny and also had a unique story.  I also saw that she will be in the upcoming Jigsaw movie.  But back to It Stains the Sands Red… the zombie makeup was amazing and they looked scary AF!  Very realistic looking.  Did not look cheap by any means.

Honestly, nothing was bad.  Only comment here would be that the one scene where Molly was hiding in the bathtub, Smalls was right outside of the tub and if she was “bleeding” he would have totally smelled that she was in there.  Not a bad part in It Stains The Sands Red, more of an observation.

Any girl that is being chased by a zombie and goes back to pick up the vodka she dropped is an ace in my book.  I tried not to give too much away because I really think this is a must see film and I didn’t want to ruin if for you.  Very well made with great acting and premise.  For you horror movie enthusiasts, you can’t tell me that the last scene didn’t remind you of that one scene in Dead Alive.  Yeah, you know the one.