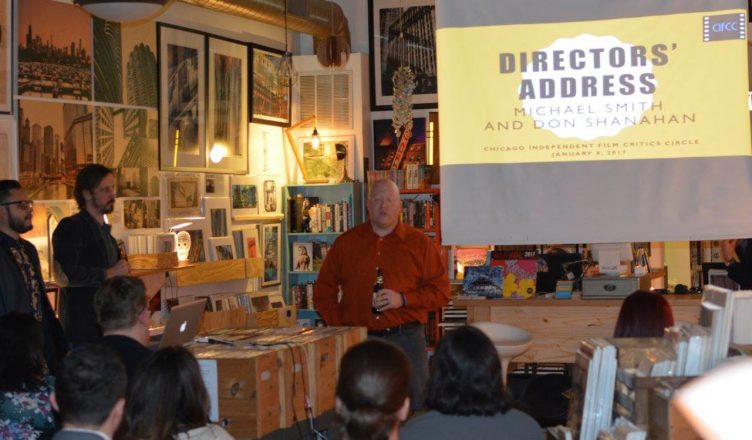 The Chicago Independent Film Critics Circle, a group who I am a co-founder of, held their first annual awards ceremony on January 8 in Chicago. It was a great evening mingling with my fellow group members and revealing the winners we voted on. Special thanks go out to the tremendous coverage we received from Nick Digilio of WGN and Darel Jevens covering our awards for the Chicago Sun-Times.

Here is the press release of the winners list:

The 28 film critics and voting members of the Chicago Independent Film Critics Circle completed their final ballots in 25 categories for their first annual CIFCC Awards.  The CIFCC will host an invitation-only awards reception at Transistor Chicago on January 8, 2017.

The voting for two special awards, the Trailblazer and Impact Awards, ended in ties. The Trailblazer Award honoring the work of an artist who truly pushed the boundaries of the medium in terms of form and content will be shared by directors Yorgos Lanthimos of The Lobster and Anna Biller of The Love Witch.  The Impact Award celebrating a person whose work has had a positive impact on society will be shared by documentary director Ava DuVernay for 13th and Pioneers of African-American Cinema curators Jacqueline Stewart and Charles Musser.

The complete list of the winners of the 2016 CIFCC Awards:

Kenneth Lonergan (Manchester by the Sea)

Casey Affleck (Manchester by the Sea)

An invitation-only event is scheduled for January 8 at 7 pm at Transistor Chicago (5224 N. Clark St.) to announce the winners at 8 pm.  Winners present will have a chance to speak and others will be available via Skype or pre-written speeches.

Unlike other film critics organization across the country, the CIFCC embraces and highlights diversity within the film industry. Its members represent the LGBQT community, females, and various ethnicities as well as critiquing films using unique platforms such as video essays and podcasts along with traditional print form.

For more information on the Chicago Film Critics Circle you can visit the groups website at: Chicagoindiecritics.org