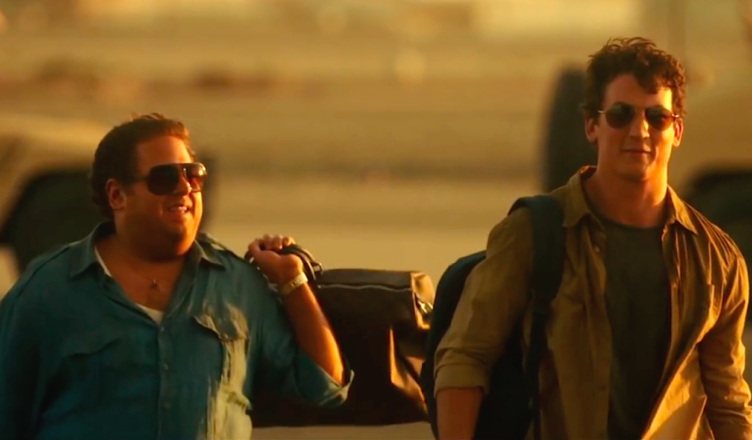 Synopsis: Two regular guys end up securing a $300 contract to run guns for the U.S. government

It’s been a quiet few years for Todd Phillips. Last project the director came out with was The Hangover 3, the least exciting of the trilogy. Phillips is back, and he’s back big time with War Dogs. One of the most entertaining movies of the year. The film stars Jonah Hill and Miles Teller as two young guys who win a $300 million contract with the Pentagon to supply the United States army with a lot of ammo.

I really enjoyed this movie. This is a fascinating real-life story of two unassuming goofs who get involved with people they have no business having any involvement with (namely military officials). This movie had a very The Wolf of Wall Street vibe to it. It’s not The Wolf of Wall Street, but it’s not far behind it either. I’d say it’s very similar to Pain and Gain (one of my favorite films), minus the Michael Bay theatrics.

I was impressed with how thoughtfully and well shot the film was. It looks crisp. There is one shot of the guys chilling and smoking pot in the car in front of a federal building before a big meeting; a medium straight on shot from outside the car of them sitting and the American flag reflecting from the hood of the car. It not only looks fitting, but badass also. The international sets look exactly like you’d imagine them to be. Iraq looks like you’d imagine (or not imagine) it too look like, same goes for Albania (I’ve been there and the movie depicts that place well). The contrast between those places and Miami is startling, and it makes the movie more dynamic. On a side note, look out for all the Scarface tidbits.

Hill and Teller are awesome in their roles. Teller plays David Packouz and Hill plays Efraim Diveroli, old friends who reunite after many years to start up this inside gun running business. Teller and Hill have really good chemistry and play off each other nicely. Hill plays the more outrageous and loose cannon one, a lot like his character in The Wolf of Wall Street, Teller is more of the straight man. Can’t imagine that the original casting was supposed to be Shia LaBeouf and late night man James Corden. What an odd mix that would be. Bradley Cooper appears midway through the movie playing an international arms dealer that’s on the run from the government. He was awesome in this mob boss like role.

The jokes are legitimately funny. The trailers capitalized on the one about them driving through the triangle of death, which is a good one, but there are many more guaranteed laughs. The plot, actor chemistry, jokes and suspense of not knowing what will happen next, kept me engaged from start to finish. Not to mention possibly missing a scene with the stunning Ana de Armas, who plays Izy, the wife of Teller’s character.

There is very little that I disliked about this film. It wasn’t corny or dull. The only thing I would have wanted them to add would be more of a recap at the end of the film, of the true story aspect. In The Wolf on Wall-Street and Pain and Gain you get to see the real pictures of the people and locations portrayed in the movie, even a simple voice-over or printed description, but they didn’t do anything. It was a simple and effective touch to hit home again on the reality of the movie.

War Dogs is one of the better and more entertaining movies of the year. The interplay between the characters was always amusing, the plot kept me focused. Todd Phillips does comedy well, this is him doing comedy with a fun and interesting plot. If you combine The Wolf of Wall Street with the Hangover you pretty much get this movie, and that is not a bad combination. War Dogs are my kinda dawgs.

One thought on “Review: ‘War Dogs’ Is Entertaining From Start To Finish”