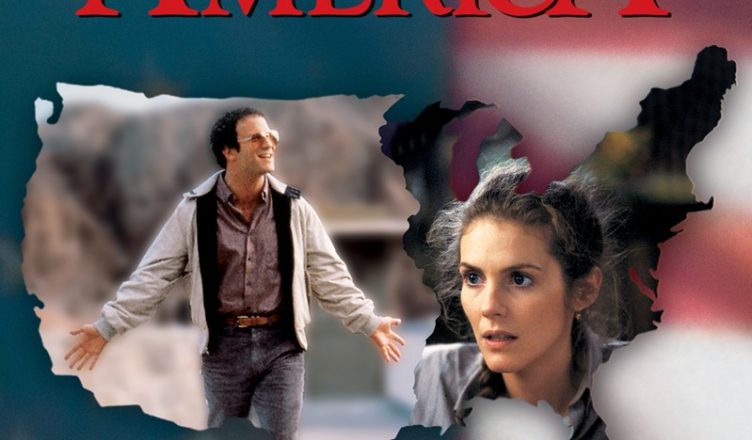 Here’s the thing about movie comedies in recent years.  They’re not funny.  Well, a precious few are certainly.  But the vast majority are pandering, forced, uncreative lowest common denominator exercises in witless tripe.  Makes you long for the days when comedies actually featured…well…comedy.  Take 1985’s “Lost in America” for example.  Please.  Unless you’ve had your funny bone surgically extracted, you will laugh.  Damn hard.  And a lot.

“Lost in America” is laugh-out-loud funny virtually from start to finish.  Director, Co-Writer and Co-Star Albert Brooks embraces a sense of humor that is right straight up my alley.  He plays a poor guy whose life circumstances have completely overwhelmed him, typically not an especially humorous situation, to absolutely hysterical perfection.

Brooks and Julie Hagerty play ’80’s L.A. DINK Yuppie Couple David and Linda Howard.  The prosperous professional pair have amassed enough liquidity to “drop out of life” and live each day as it comes as they drive across the USA in a fully loaded RV.  It’s David’s idea of paying all-chips-in homage to the rebel bikers featured in his favorite film, “Easy Rider”.

Things start off fine for the Howards on a celebratory detour to Vegas to renew their wedding vows.  But then a catastrophic event propels them on a series of misadventures throughout the American southwest, all of which render me debilitated with helpless laughter even now after repeated viewings.

As there are simply too many riotously silly scenes to recount, I’ll go with the one featuring former ad-man David desperately pitching a “fresh” promotional campaign to a Casino Manager (exquisitely played by Garry Marshall) as he pleads with him to refund the money his wife had lost in a euphoric gambling haze.  “The Nest Egg”, as David has come to refer to it, must be returned.  Needless to say, the guy is not real hip to the notion, particularly after David is less than flattering about one of his favorite entertainers, the inimitable Wayne Newton.  Turns out that, much to David’s dispiriting chagrin, not all that pumps up “Sin City” is golden.  Especially when the premise suggests that, hey, relax, nobody loses in Vegas.  You can always recoup the cash from which we separated you.  Just ask!

It may be posited that “Lost in America” is a tad too long for this hour and 31 minute story.  Admittedly there is a stretch at the back end of the movie where we get to spend perhaps a little too much time in the charming hamlet of Sedona, Arizona.

And it could conceivably be that Brooks frenetic sensibility may wear out it’s welcome for some.  However, being as I am practically powerless to resist the frazzled fellow who is teetering on the precipice of losing it entirely at any given moment, I am not among such company.

But I quibble.  I heartily maintain that if you find this to be the case, one question if you will.  What the hell’s the matter with you??!!  Are ya flippin’ “lost” for crissakes??!! ;)

Granted, “Lost in America” may not be your cup of tea to the decided degree that it is mine.  But with such divergent classic lines ranging from “Oh, call security.” (David’s mocking echo of his boss’s threat mere moments after pointedly proclaiming to him, “Well, ahem, you!”) to “Brillo Pad Fathead!” (one amidst a hilarious hail of insults grade school kids hurl at David during a hapless stab at being a school crossing guard) you are bound to hit upon more than just a handful of moments to stimulate your own funny bone.

Need a good laugh? Then go get yourself "Lost in America".

2 thoughts on ““Lost in America”: A Comedy Treasure found…again.”