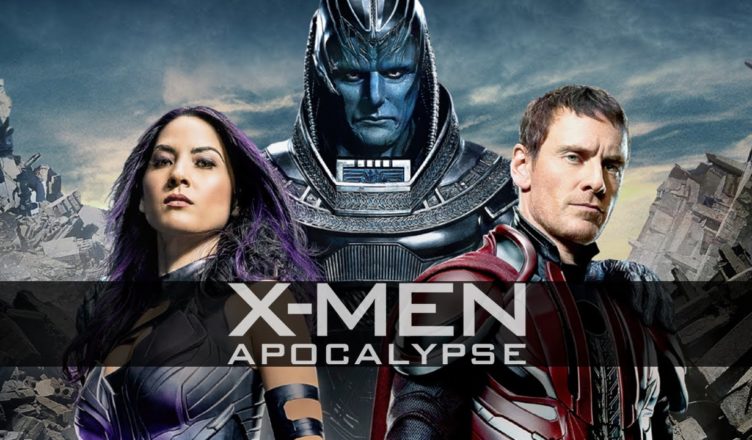 Synopsis: The emergence of Apocalypse threatens the existence of the world and the X-Men must stop him before complete destruction ensues.

This is the one big summer movie that seemed to have gotten lost in the shuffle. The anticipation for Batman v Superman and Civil War seemed to push X-Men to the back line. Almost forgotten that this monster of a movie was releasing this summer. It’s a shame that it hasn’t gotten the proper hype that it should, because it’s awesome.

X-Men is my favorite superhero franchise. I make no apologies for that. Without success of the original movie in 2000, we might have never entered the era of superhero movies. It was sort of the standard that lead to the superhero craze, and sixteen years later, after numerous storyline and script variations, the franchise is entering a new age. Before they do that, the age of “Apocalypse” had to happen.

Bryan Singer is sort of the godfather of the X-Men movie universe. Writer Simon Kinberg is right at his side. Many fans were worried and not ready for them to use their ace villain–Apocalypse. Where would you go from there? After using the grandest villain in the X-Men universe. They did it in “X-Men: Apocalypse” and it worked out perfectly. The eight film in the X-Men franchise, this one, is probably the best one overall. Yes, I’m even including the hit X-Men Origins: Wolverine (just joking, relax). An iconic villain, a stellar pool of new X-Men characters, and a great ending that leads to a new beginning, needless to say I really liked this movie, now onto the good and the bad.

There is a lot to like about this film. What Singer and Kinberg have mastered story building concept for this franchise. They did switch things around, and had to flush out the mess that Brett Ratner made and ignore the self-admitted mistake that Gavin Hood made.  The franchise gets crap for the reboots and changes, but “Apocalypse” sets it all right and transitions the future movies. This film is about two things: Introducing the reign and terror of Apocalypse and introduce and transition the “new” youthful X-Men. Both are successfully integrated.

Lets start out with Apocalypse himself. I can’t remember last time a comic book/cartoon character was depicted so well in a film. They usually alter their costume and tinker with their look, lots of times rightfully so due to the modern styles evolving. Apocalypse looks as close to the comics as possible appear on-screen. He has the same colors and look, just more dynamic. Oscar Isaac is the PERFECT casting for this character. Couldn’t imagine anyone else doing it. He’s as intimidating, powerful, and physically imposing as you’d want any comic book villain to be. That was actually my big worry, as to how they would do the character justice on the big screen, not only did they do him justice, they took it to new heights. Couldn’t have been more pleased with how Apocalypse turns out in the movie.

The kids are alright. Among the new X-Men introduced are Cyclops (Tye Sheridan), Jean Grey (Sophie Turner), and Kodi Smit-McPhee (Nightcrawler). They are brought in separately, then packaged together for the remainder of the movie. They compromise the young mutants clique. Thought their casting was pretty solid. Obviously they are going young, sort of of in the mold the Anna Pacquin young Rouge, but much better and useful.

The other new villains that are introduced are Psylocke (Olivia Munn), Angel (Ben Hardy), and Storm (Alexandra Shipp). They are the three of the Four Horsemen that serve Apocalypse, with Magneto being the other one. Psylocke looks great, not only because it’s the sultry Munn that plays her, but they honored her costume from teh comics, yes, the overly sexy one. Munn manages to hold her own. Jubilee is also introduced, but once again she fails to make any impact and is forgettable. It just seems to be the theme for the Jubilee character in this X-Men franchise. Col. William Stryker plays a fairly significant part in this film, they are making a conscious effort to introduce his backstory. Seems like they are setting him up for future films.

The vets, James McAvoy, Michael Fassbender, and Jennifer Lawrence are the foundation of this film. They still carry most of the load and add that star credibility. I really liked the character arc they have gone through in the previous two films, and they are all at interesting points in their lives in this movie. Magneto is living in isolation. Raven/Mystique is traveling the globe looking to save the mutants, and Xavier is building up his school along with Hank McCoy. They have been the faces of the last two X-Men films, including this one, it will be interesting to see what they do should they leave the franchise, a definite possibility now that Lawrence and Fassbender became top A-list names.

The action scenes are awesome. Not an overkill. The CGI is put to great use, the grand showcase of the pyramids and awe inspiring visuals of the destruction to the world. X-Men has always had a handle on great visuals, but this movie takes it a notch further without making it seem outlandish or cartoony. The X-Men movie plots have always revolved around social commentary, centered on acceptance and finding yourself in a world where being different is not socially acceptable.

With the focus being on the all-powerful Apocalypse, the Four Horsemen didn’t get enough. I would have liked to have seen a lot more of Psylocke, Angel, and Storm. Their backstories are briefly touched on, but not properly developed, instead they are just thrown into the mix. I understand that they didn’t have the time to honor everyones story, but these are new and exciting characters, so a little more effort would have gone a long way.

The new young X-Men get it done and aren’t made to look weak, but I couldn’t help but notice how amateurish they appear when you put them side-by-side with the likes of Magneto, Xavier, or even Beast and Mystique to a lesser extent. They are teens with powers that are a bit too evolved for them. They do look the part though. If there was anyone who resembled the image of what a young Scott Summers and Jean Grey would look like, it would be Sheridan and Turner.

Once again, Magneto plays the flip-flop game of choosing sides. It’s been like this for the majority of the X-Men movies, but when are we finally going to see Magneto pick a side and stick to it? Thought this could have been an opportunity in “Apocalypse”, but not so much.

No Gambit? Ok, so that’s not a huge criticism, but it would have been a hell of a good surprise to see him make a cameo.

“X-Men: Apocalypse” accomplishes everything it sets out to do. Introducing us to new and exciting characters. Apocalypse exceeds any and all expectations. Fassbender shows once again that he’s a top actor today, he speaks near fluent Polish in the early scenes he’s in. The guy can’t do wrong.

Unfortunately this might be the end for him, Lawrence, and McAvoy to extent. It would be a huge loss to the franchise, but the movie did its best attempt and transitioning to a new X-Men team for the future movies. It’s conceivable that they can move away from the big three and continue the franchise with the young guns. It might not be the same or as good, but this film will be also remembered for passing the torch in the X-Men franchise. There might be a bit of a rebuild going forward, but they did the best they could with the new kids, who will have big shoes to fill. Singer, or whoever will be at the helm will just have to be creative with who they bring in to make cameos and how to craft the future stories around the plot, more than the individual X-Men. It might go from superstars to more of a collective unit focus, which could be a good thing.

“Apocalypse” is the sleeper superhero movie that shouldn’t be much of a sleeper. It’s just as good, if not better than any of the superhero movies this year. The film is everything you’d want an X-Men movie to be. Fun. Exciting. Grand. Well acted. Visually stimulating. It might be the end for the X-Men that we knew for the past sixteen years, but a new beginning to the X-Men we are about to get to know for the next sixteen.

One thought on “Review: “X-Men: Apocalypse” Is The Great Ending & Rise Of A New Beginning”