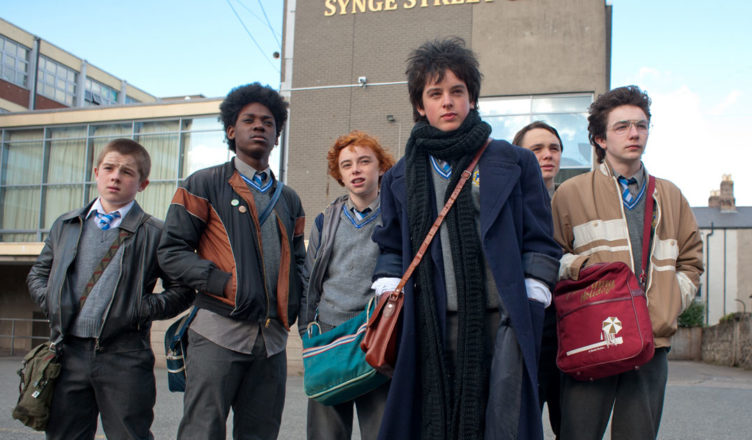 Synopsis: Set in 1980’s Ireland, a boy starts up his own band as he attempt to find love with a mysterious model.

April appears to be a the month of 1980’s nostalgia and coming-of-age. Richard Linklater’s Everybody Wants Some brought the American perspective on college partying. In Sing Street, John Carney writes and directs a story of a boy growing up in 1980’s Dublin that starts a garage band. The different movies, but both both movies depict adolescent self-discovery. Cosmo, played by newcomer Ferdia Walsh-Peelo, is a boy seeking to distinguish himself from all the other kids at his school. Cosmo’s life at home is tumultuous. His parents don’t get along. The family is facing some financial woes. The only escape Cosmo gets is watching music videos with his bummy older brother Brendan (Jack Reynor). It’s the music videos that give Cosmo inspiration to start his own band.

The characters in this movie feel very real and relatable. They are far from a perfect family, but they aren’t destructive to the point that they become looney. The parents are on the verge of a divorce, which the kids want them to make official. Brendan is probably the most logical and wisest person in the house, yet he’s portrayed as a weed-smoking bum. The sister isn’t shown much, besides when her head is buried in books. Walsh-Peelo does a really nice job playing a kid that has to deal with a variety of feelings. We see Cosmo when he’s mad over being picked on by his principal and bullies. Sad when he’s facing the uncertainty of his family staying intact. Joyous over his band and close-knit friends (more on them coming up). Hurt and in love with a girl who he’s brave enough to befriend, but not seasoned enough to be with.

The group of boys that comprise the band are a true group of misfits. They look the part and are oblivious to some of their surroundings, which oddly is what makes them bold and brave at the same time. It’s fun seeing this group of underdogs be sort of unaware that they actually are underdogs. The spirit and belief these kids have is refreshing. They attempt to create a band, but have no idea what music they want to play or who will be doing it. Their attempt at starting a band is as likely to succeed as a cook trying to fly an airplane. Hard to imagine. This kids have no clue. As much as the film would lead to believe that it is a coming-of-age story, it is a bit, it’s more of following your passions and making of a band, and the triumphs and errors that come along with it. Seeing them attempt to make music videos is entertaining to say the least.

Lucy Boynton plays Raphina and she’s a total knockout. She is the epitome of what a sultry and desired 80’s girl looked like. Her stylish wardrobe and all-American look makes her seem like she would be ideal for any John Hughes movie. Raphina is just different than any character in the film. She’s hip and hot, while everyone around her seems a lot more subdued in every way. She has that unattainable quality to her, yet there is this quiet and sincerity about her as she begins to open up to Cosmo. The pairing of Raphina with Cosmo is a mashup of polar opposites. No way would a simple goofy kid like Cosmo ever be around a girl like her, and the film plays on that very concept, it’s what gives the film an added dimension that fuels Cosmo and the plot.

The plot itself is relatable. Even the unlikely relationship that’s being formed by Raphina and Cosmo is conceivable. A kid who is bullied that wants to get back at the bullies by doing something bold is what every one of us can find relatable when we were younger. I know I could. I was a kid that moved to America straight out of Poland. I grew up in a very different culture, nothing like the kids in the U.S.  I grew up picking mushrooms for fun. Getting milk from a milk lady. I can relate to growing up in Europe and somewhat to what Cosmo went through. Coming to America was tough at first, the kids bullied me and it was tough making friends when you were considered the foreign kid. We all moved somewhere new at some point in our lives. This sense of new beginnings and starting something new that’s bold is evident in the characters in the film.

There isn’t much not to like about the film. Should I nitpick that some of the actors had such strong Irish accents that it was hard to understand them? Probably not. Was Raphina’s quick admiration for Cosmo a bit cliche and forced? Maybe, but I can understand why it would be based on how it evolves later on in the film. The musical numbers feel a bit rushed towards the later half of the movie, sort of follow one another consecutively. On the other had, I did appreciate that the movie didn’t sell itself into a musical. The title suggests it, but doesn’t follow through on it.

Sing Street was a really pleasant surprise of a movie for me. Irish filmmaking has really been on a roll lately with Glasslands, the upcoming Tiger Raid, and now Sing Street. It was nostalgic to see life in 1980’s Ireland, something I can’t relate to personally or isn’t depicted in cinema often. The actor performances were grounded and relatable. It’s a boy meets unlikely girl love story with the backdrop of a band formation and overcoming personal family issues. A lot is going on in the film, but it all works of each other. Each issue or incident is provoked and reasoned by the other. The film is fun, romantic, and sincere. I had no expectations, but left the theater with a smile and wanting to see more. That’s usually a great sing and feeling you want to have after a film.

One thought on “Review: ‘Sing Street’ Is Another Irish Triumph”