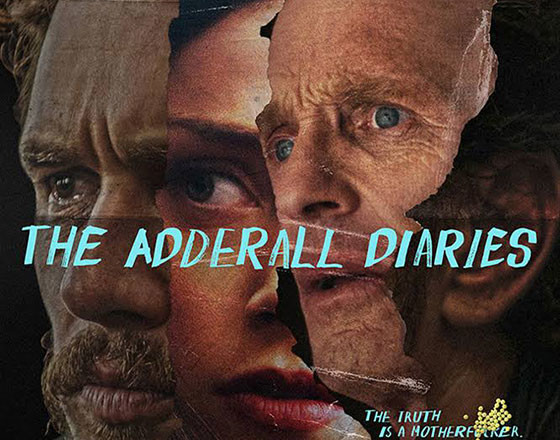 As one of his all-time biggest fans, when I saw that living legend Robert Redford was among the deep pockets to pony up as Exec Producer for the domestic suspense drama “The Adderall Diaries”, instantaneously my interest was peaked.  And the Premiere Trailer did nothing to dissuade me from looking forward to the film’s theatrical debut on April 15 (hey, this may well serve as a pleasant distraction from the “joy” of Income Tax Due Day for us lucky Americans ;]).

James Franco stars (and co-produces) as Stephen Elliott, a real-life novelist wrestling both with writer’s block and a volatile familial past he can’t quite bring into focus.  First-time Feature Director Pamela Romanowsky also wrote the screenplay for the movie, basing it on the best-selling memoir by Elliott. The supporting cast here is most impressive indeed, featuring the collectively considerable talents of Ed Harris, Christian Slater, Cynthia Nixon and Amber Heard.

The preview plays like a frenetic back and forth narrative between what is happening in the ADD-afflicted Elliott’s Adderall-laced present and what may have happened in what appears to be a darkly sinister past. If this flick is anything like this Trailer I just watched, then, to paraphrase the immortal Mae West, “Fasten your seat belts, boys (okay, okay, and you ladies, too, of course). It’s gonna be one helluva bumpy ride.”