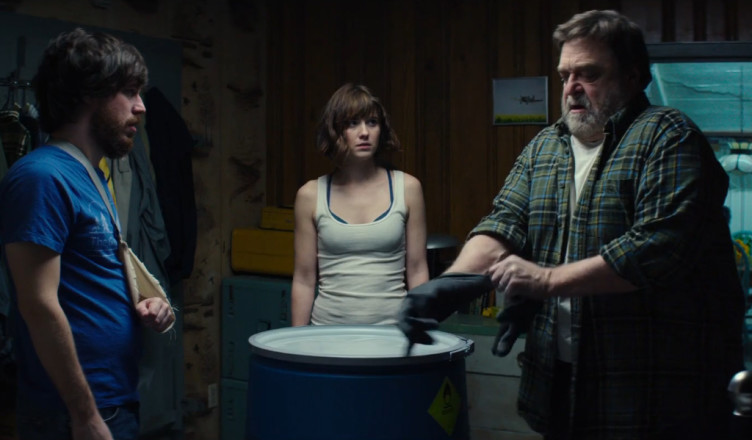 Synopsis: After getting in a car accident, a woman is held in a shelter by two men, who claim the outside world is affected by a widespread chemical attack. (Imdb)

This movie came out of nowhere and it left a hell of an impression. Did anyone hear about the making of this movie prior to the Super Bowl commercial teaser trailer? I certainly didn’t, it’s my job to know these things, but J.J. Abrams and the folks at Paramount and Bad Robot did their best to keep this movie secretive. First question that comes to mind, based on the title, is this a sequel to the original Cloverfield? Kinda. Sorta. Not really. Maybe. While it gives hints and if you’re paying attention you will catch the radio broadcasts mention the events happening out east.

10 Cloverfield Lane mainly centers around Mary Elizabeth Winstead’s character Michelle and John Goodman’s character Howard. At the start of the movie Michelle gets into a mysterious car accident (not so mysterious as the plot evolves) and when she wakes up she finds herself chained in a cellar. There is a real SAW feel to this movie at the onset, as if Jigsaw was set to appear and ask Michelle if she wants to play a game. Well, Jigsaw doesn’t appear, but Howard does. He reveals himself to Michelle as her apparent “savior”. Little by little Howard lets her in on why she can’t leave the dungeon–the air has been poisoned and everyone is dead on the outside. Emmett is introduced as a fellow inhibitor of the dungeon. The plot starts turning into overdrive when Michelle’s distrust for Howard leads to a plan on escape. The question that’s presented is if she’s doing the right thing or should she be trusting Howard?

There is a lot of good about this film. The intrigue and suspense is established at the early onset of the story and ramps up every scene that follows. This is a three character movie. Only people we see are Michelle, Emmett, and Howard, but their well crafted personas are ideal for the setting their are in. The ambiguity to their past is a significant part that dictates their present situations. As the movie moves along, you get snippets to their past and a bit of peek into their significance and motives. This sort of slow build keeps you interested in the plot and being invested in these individuals. They even get to a point where they feel like a solid family, and based on what is portrayed I could justify that, but still have that skepticism going.

Why hasn’t Winstead been featured in more prominent roles until this one? She was set to break out after, but never did for whatever reason. She’s very good in this role. You can’t help but be invested in Michelle by rooting for her while being terrified for her at the same time. Goodman is phenomenal as Howard. Rarely do you see a well-rounded and complex character in a Sci-Fi or horror film, but the personality switches that Howard displays moment-to-moment are creepy and for some odd reason somewhat endearing. He seems like an honorable guy, even though he has the aura of a psychopath. It’s a really meaty role, that Goodman masters. I still can’t figure out if Howard is trustworthy or simply insane? Probably both.

It frustrates me when really good and suspenseful movies that keep you on the edge turn to cheap gimmicks for a payoff. Three quarters of this film are fantastic, the ending leaves a lot to be desired, as the ridiculous takes over. I can’t spoil the ending, but you can see where I’m going, supernatural nonsense takes over. The ending isn’t horrible, but doesn’t pay off all that was being set-up and build throughout the movie. They could have done a better job filling the holes to the backstory of Howard’s daughter that becomes a key plot point.

If you wanted a sequel to Cloverfield, you didn’t really get it, though the movie did pay homage and tie into it at various points. 10 Cloverfield Lane is really two movies in one. Majority of it is a legitimate horror film, where discovering what is actually happening outside the bunker is a lot less scarier than what is going inside it. The other part is a Sci-Fi mystery. The horror part works a lot better. This could have easily passed as a legitimate horror film on its own merit. Director Dan Trachtenburg does great work highlighting the characters and delivering the eerie mood taking place around them. Considering it’s his first feature film, he hits a home run for his effort. Most importantly thank goodness for none of that nauseating shaky camera from the first one.

There is a definite feeling of claustrophobia in the film. A scene where Michelle is crawling to tight air ducts is sure to make you cringe. Hank looks and attempts to act like a normal guy, but he’s terrifying become of that. The film provides some real jolts and chills. The tension feels real. Leave it to Abrams to deliver on thrills, but working around a modest setting. Kudos to Howard for really stocking up on those canned items. Must have been clearing the local grocery story for a while. Ultimately 10 Cloverfield Lane is a place you want to stop by and check out, just don’t go inside or you may be stuck inside.

2 thoughts on “Review: ’10 Cloverfield Lane’ is The Right Place for Thrills and Chills”