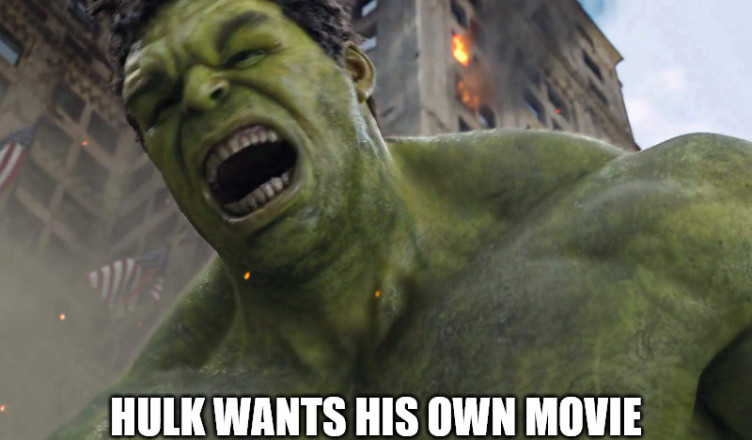 I was talking with some of my friends and family recently about movies (obviously), and Marvel came up in the discussion (as it should). Marvel Studios has been doing a wonderful job with their property, at least with the ones they have the right to. My friend who’s not in the movie circuit asked me, “When is the next Hulk movie coming out?”. This turned into a rant from yours truly. Kevin Feige, the president of Marvel Studios, has went on record saying of how they thought about a Hulk stand alone. But, they believe Hulk is better suited in a team rather than by himself. DISCLAIMER: Hulk is my favorite superhero, so this is about to become an incredible rant.

First, Hulk is one of the most recognizable comic book characters up-to-date. If there was a list of recognizable comic book characters, it would probably go as the following: Superman, Batman, Spider-Man, Wonder Woman, and then Hulk. Yes, in that same exact order. To not utilize that much potential is absolutely asinine. How does the old saying go, “if you build it, they will come”. Well, if you put any of the aforementioned names in a movie, people will come and that’s no debate about that . Batman is going to be in the upcoming D.C film, “Suicide Squad”. Do you think they did that because it was necessary for the story? Fuck no, they did it because tacking on a name like that tacks on another 50 million dollars easily. But , that’s not the biggest problem when it comes to creating a Hulk film, the problem lies with the story. How can you captivate an audience for two hours with a character that essentially can only say about five lines of dialogue? I’ll tell you how and that is by not giving a rat’s ass! You treat a Hulk film just like you would treat an Asian Kung Fu flick: weak writing mixed with beautiful fight choreography. Nobody cares about dialogue in a Hulk movie, we all came to see him smash stuff.(Skeptics) “Oh wait, you can’t have a movie with  just action and no story”. Oh,  I’m sorry sir, Crank was 90 percentage of action and that was a pretty okay movie. 300 was a thousand percent action and everybody loves that film. Raid 1 and 2 was about 80 percentage of action and that was well received. Mad motherfucking Max: Fury Road was 95 percentage of action. If the script had more than twenty pages of dialogue you would be shocked, but guess what? Everybody loved Mad Max, some people even go as far as to say its the best movie of the year. So why can’t you apply the same method?

Third issue is the distribution rights. For those who are unaware, Marvel Entertainment does not own the distribution to The Hulk, Universal Studios does. Which in a nutshell basically means Marvel can make all of the Hulk movies they want, they just have to let Universal distribute the film.  Don’t seem like a big deal right? Wrong, Marvel does not want to share the profits, plain and simple. To Marvel: get your head out of your ass. This is a business and sometimes you have to play ball. If you can do it with Fox, and Sony you damn sure can do it with Universal. Unless their cut is like fifty percent, and if that’s the case retract everything I just said. The point is please don’t hold us moviegoers in such high regards. We don’t always need a brain buster of plot or award winning script writing to make a great movie.Why? Because most of us dumb and we don’t care, hell just ask Micheal Bay. I’m not saying don’t put no effort into the jolly green giant, but know he doesn’t require much. Focus on great visuals, C.G.I, and action. After that everything will just fall into place. You took a chance with Guardians of the Galaxy and then Ant-man with many more risk on the way (i.e Ms Marvel, Inhumans, Black Panther). The moral of the story… Stop dicking us around and give us an Incredible Hulk movie.