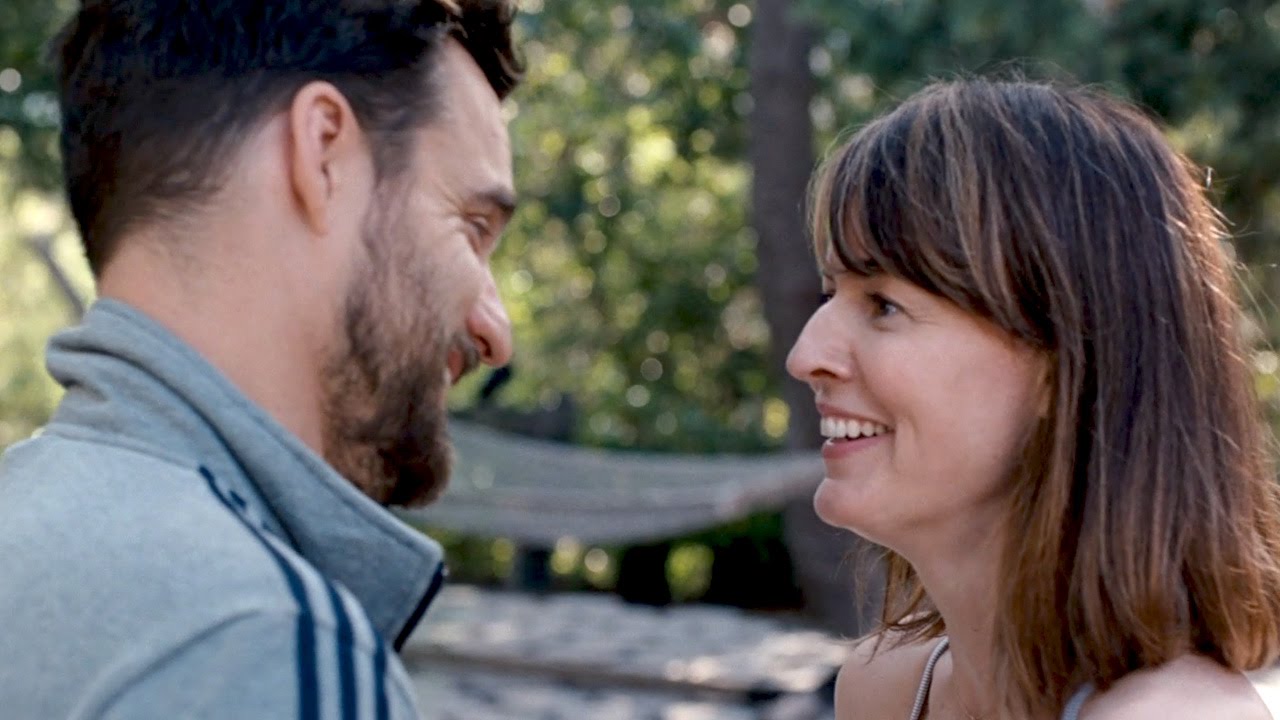 Tim, a high school teacher who is feeling his age, and and his wife, Lee, a yoga teacher and young mother, decide to hide away in a house in the woods and take a vacation from life. Their duplex, their lack of money, and some building resentments towards each other (like doing the taxes and choosing a pre-K for their son), weigh them down. One weekend. Lee takes their son to her mother’s house, and Tim stays home to do his “homework” (the taxes). But Tim can’t get his mind off of a spooky discovery—a rusty gun and a very human looking bone have been found in the backyard. Lee has plans for a wild Saturday night, sans baby.

I really liked Digging for Fire. It’s a hit for Joe Swanberg, the prolific director and godfather figure in today’s indie scene. Swanberg’s newest is an ensemble comedy with a splash of drama. It ruminates on what it takes to keep a marriage strong after it becomes a family. But there’s a subtlety to Swanberg’s (and co-writer Jake Johnson’s) storytelling that keeps it from boiling over. The plot, the acting, and the style, are contained and efficient. Most of the roles are cameos, like Jane Adams popping in to geek out about a sighting through a telescope. It’s hard to judge such tiny bursts of acting. But the bigger parts are thoroughly nailed. Jake Johnson pulls off the perfect amount of gooberish behavior to help realize Tim’s quarter-life crisis. Rosemarie Dewitt’s performance as Lee is dynamic. She displays a deep range, from taskmaster, to nervous mother, to teenage asshole all grown up. Orlando Bloom plays a bar owner/chef looking to woo Lee, and Brie Larson is a partier who sticks around for some “harmless” fun with Tim. Bloom and Larson fulfill their roles as bait for adultery, but I think Sam Rockwell and Mike Birbiglia—both playing friends of Tim’s but from different parts of his life—stole the show with a perfect yin and yang representation of friendship—the wilds of youth and the responsible morality of adulthood. Birbiglia’s double-take as he witnesses Tim helping a young lady get dressed for a dinner date is the most genuine laugh in the film.

Digging for Fire is a labor of love, and everyone involved feels privy to the film’s good vibes and strong vision. It’s shot on film, and Richardson, with this his third go as Swanberg’s cinematographer, used artful techniques to bring out a cinematic quality that does justice to its film stock. Dolly shots, as well as favoring movement over cuts, helps bring the film to life and to engage the audience with the experience. Indie tunes soak and sooth us. Lee’s adventurous weekend experience is universal. The pressure she puts on her one night of fun is something we can all relate to—you just know it isn’t going to work like she plans it. Tim’s desires are a bit quirkier. His Blue Velvet-ish discovery leads to an obsession with digging up the property to find out what’s buried in his backyard. When it draws the ire of a neighbor, who warns Tim to let sleeping dogs lie, it only makes him dig deeper. But what he’s really digging for is purpose (duh), and he won’t find that in a pile of dirt.

Digging for Fire is probably named after the Pixies song, “Dig for Fire.” The song is about finding one’s passion, and Digging for Fire is certainly about finding the passion in a marriage when the flame begins to flicker out. But Digging for Fire could’ve gone deeper into the human condition and its affect on marriage rather than maintaining its staunch pro-marriage idealism, but it’s a small complaint. I appreciate what this film has to say. It’s optimistic, but it’s adult about it. Anyway, whether you are glass-half-full- or half-empty kind of person, sometimes it feels nice when someone fills it up for you.

There was a Q&A held afterward with Director/co-writer Joe Swanberg, co-writer/star Jake Johnson, and cinematographer Ben Richardson. Here are some of the more interesting insights (that don’t spoil the movie):