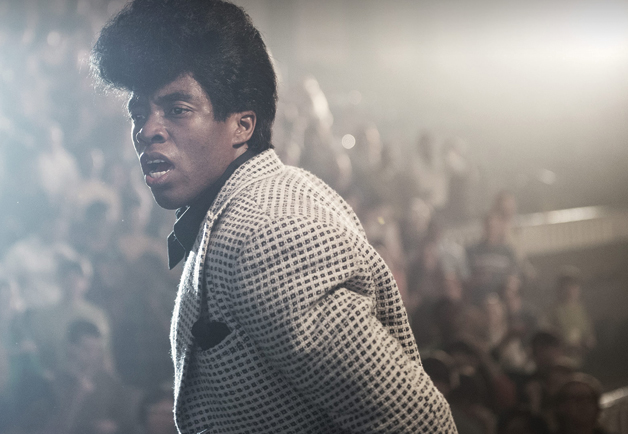 Synopsis: Music icon James Brown’s rise to fame from his troubled past.

The master of funk has arrived. In Get On Up, available on DVD and Blu-ray everywhere, Chadwick Boseman takes on the iconic role of James Brown.

Get On Up gives an inside look at James Brown from his humble beginning to his rise to stardom. Right from the start the movie flips back in forth in time. It begins with James Brown entering a building holding a shotgunon a plane heading to a USO performance, the planes engine catches fire and is about to crash. Everyone on the flight is panicking, besides James. Director Right from the start of the movie, Tate Taylor makes it a point to present Brown as a fearless and confident figure.

The movie quickly goes back in time to when Brown was a child. His rough upbringing is depicted. His father was an abuser, the mother leaves the family. James is relocated to a family members brothel in Georgia. It’s at this brothel, living with his aunt, that James Brown starts discovering his passion for music. The movie continues to switch back and forth between his childhood and adulthood. The movie seems to fast-track to his stardom fairly quickly. His rise isn’t a slow build, it develops in just a few scenes. The pacing of the film often feels forced and unorganized.

The film attempts to move in a chronological order. The “eras” are noted and the years are highlighted at the start of some scenes. The fault being that towards the end they go from the 1970’s straight to the 90’s. Skipping decades makes the film look sloppy.

The area that Get On Up succeeds is showcasing the inner struggles that Brown deals with throughout his entire life. The anger and violence issues that he had are depicted. The movie does a good job of exuding his personality. You can feel the confidence and bravado that he carries. The don’t give a damn attitude he lives by is noticeable. The influence that Brown had in politics and social matters is documented. There is a scene where Brown performs a concert right after Martin Luther Kings assassination. People might not realize until they see it in the movie what sort of pull that James Brown had with the people.

Chadwick Boseman’s portrayal of James Brown in supreme. Often times in the movie I found myself in awe of how similar Boseman looked to the actual James Brown. The resemblance is eerie. Credit to the makeup and costume department. Boseman is just magnificent in his mannerisms and speech. Dan Akroyd plays Ben Bart, Brown’s manager/business associate. Akroyd is fairly entertaining as the straight-faced companion. Nelsan Ellis quietly delivers a solid and underrated performance as Brown’s Famous Flames band member friend. Other notable names rounding out the cast are Viola Davis, Craig Robinson, and Jill Scott.

The Blu-ray & DVD combo features are plentiful. There are 10 deleted scenes that run a total of 15 minutes. One of the deleted scenes is James Browns meeting with Mick Jagger, pretty cool stuff. There is a Full Song Performances feature that includes songs, Out of Sight, Steal Away, I’ll Go Crazy, and A Cold Sweat. There is a Extended Song Performances feature that includes songs, Please, Please, Please (live and recording session), Say It Loud I’m Black and I’m Proud. A Long Journey to the Screen is a 4 minute feature that has Mick Jagger and Brian Glazer talking about producing the movie. Chadwick Boseman: Meet Mr. James Brown feature is 11 plus minutes of producers and director talking about Chadwick Boseman being James Brown. The Get On Up Family is a feature six minute feature about the casting of the movie. On Stage With The Hardest Working Man is another 6 minute feature where the cast and production team discuss the impact of James Brown’s performances. The Founding Father of Funk is a 13 minute feature with current musicians such as Ice Cube, Pharell, and various cast members speaking about the impact James Brown made on their personal lives. Tate Taylor’s Master’s Class is a 7 minute outtake feature of wild couple dancing to James Brown music during a rehearsal for the production team. This clip is wild and insane. Lastly the Feature Commentary with Tate Taylor.

Get On Up is a pleasing, yet frustrating film to watch. With a running time of 139 minutes, the movie feels too long. There were plenty of scenes that didn’t warrant to make the final cut, such as some flashbacks, or repetitive talking scenes with his band mates. At the midway point, the film heavily deviates to being a musical. Five minute plus performances on-screen become all too frequent. The biggest crime of all is not including Browns greatest hits “I Got You (I Feel Good)”? For most casual fans of James Brown, that is the number one song most people recognize him by, it’s puzzling why it’s not included in the film. Get On Up doesn’t seem to have an identity as a film. One moment it feels like a film, next scene it feels like a documentary, then it attempts to be a musical. The movie unlike it’s main subject, lacks some soul.