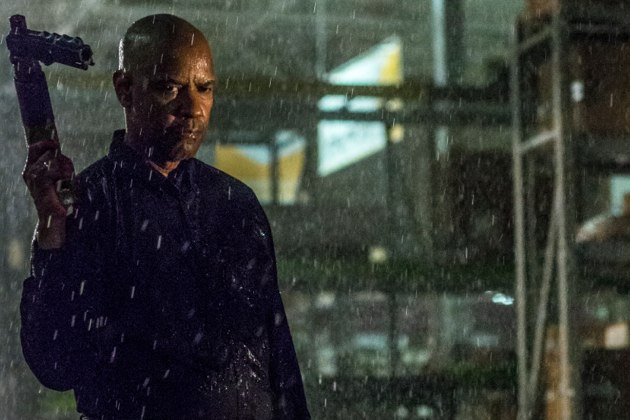 Synopsis: A man believes he has put his mysterious past behind him and has dedicated himself to beginning a new, quiet life. But when he meets a young girl under the control of ultra-violent Russian gangsters, he can’t stand idly by – he has to help her. (c) Imdb

“The Equalizer” is much like many of the Denzel Washington action films we’ve seen. Usually you get one of two Denzels in the action genre, it’s either the excessively cocky, guns blazing killer (“Training Day”) or the quietly brutal yet calculated killer (“Man on Fire”). In “The Equalizer” Denzel falls more into the calculated killer realm and this is a role where he definitely shines.

This may be a familiar role for Denzel Washington but it is a role that audiences seem to enjoy and a role that he has perfected. Despite his age and physique, Washington proves himself as a force to be reckoned with. Instead of relying on brute force and brawn, “The Equalizer” relies on resourceful ingenuity. The most creative aspect of this film is that same resourcefulness that empowers intellect over guns. Using things like corkscrews, power tools, and even textbooks, Robert’s (Denzel Washington) fighting style is a crowd pleasing tour de force that fueled my engagement throughout the film.

Outside of Washington’s character, the film is very simple and predictable from the aspects of plot, character development, and cinematography. The plot ignites from Robert’s father-like attachment to a young prostitute named Teri (Chloe Grace Moretz). Surprisingly neither Robert nor Teri are fully explored to establish a true relationship between them, but that relationship later becomes insignificant as the focus shifts towards the action. When Teri gets in trouble this causes Robert to erupt and the brutally ingenious action begins. From here the film goes into a predictable (yet enjoyable) action film plot that focuses little on the characters and more on the kill shots. The fights are a mix of brutal choreography mixed with a “MacGuyver-esque” style of makeshift weaponry. There’s even an over the top explosion walk away that would make Michael Bay say that it needs to be toned down.

“The Equalizer” is a typical action film geared towards entertaining rather than gaining critical acclaim. It’s a fun ride once the ride gets moving and by the end you’re ready to ride again. It will not entertain the “cinephiles” looking to appease their cinematic appetite but it will entertain general audiences. This is a safe, interchangeable action film with a twist of ingenuity that I definitely enjoyed despite it’s lack of key elements.

One thought on “Review: The Equalizer”