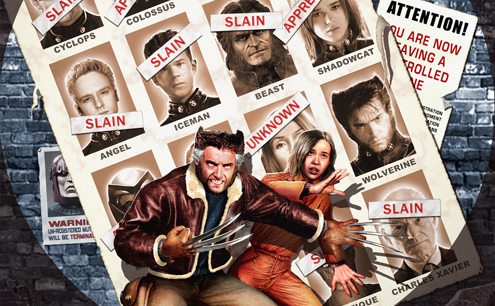 It seems that since Anna Paquin and Ellen Page have agreed to reprise their roles as Rogue and Kitty Pryde we may still have a chance at a proper translation of the Days of Future Past story with time travel and everything.  Hugh Jackman may still have a huge question mark on his face, but in all likelihood if they give the guy gets the call he’s bound to say yes.  The damn X-franchise is his career anchor and his career could, and probably would, be a much lower profile one without Marvel’s band of mutants.  That said, it’s a safe bet that Singer wants him, he’ll be there.

“It’s epic. We get to bring both casts together. We’ve cracked it in a way that makes sense. I had a two-hour conversation with James Cameron about time travel, string theory, multiverses and all that. You have to create your rules and stick with them. That’s what makes TERMINATOR and BACK TO THE FUTURE work so well. And there are certain mechanisms in X-Men, certain powers, perceptions and characters, that make this possible. More than any of the movies I’ve made, it comes to me much more quickly than on other films. With Superman Returns I struggled a lot. I guess it’s either my history with the X-Men universe or I have some kind of knack for this particular story.”

They’ve thought out the time travel in the usual and expected ways, it’s just a little odd that he chose to speak to Cameron about the subject.  I doubt they spoke specifically about X-men but it’s interesting that he randomly talks to Cameron, for hours at a time, about time travel and all the concepts that come with.

I like that they’ve already solidified that Wolverine was alive and well in the First Class film, so I do expect to see the return of Jackman to be announced at some point in the future.  I also wouldn’t be surprised if they bring back Kelsey Grammer as beast, James Marsden as Cyclops, and more.  The only person I don’t expect?  Halle Berry.  Her career is way too big for a measly Marvel film…. (that’s sarcasm).