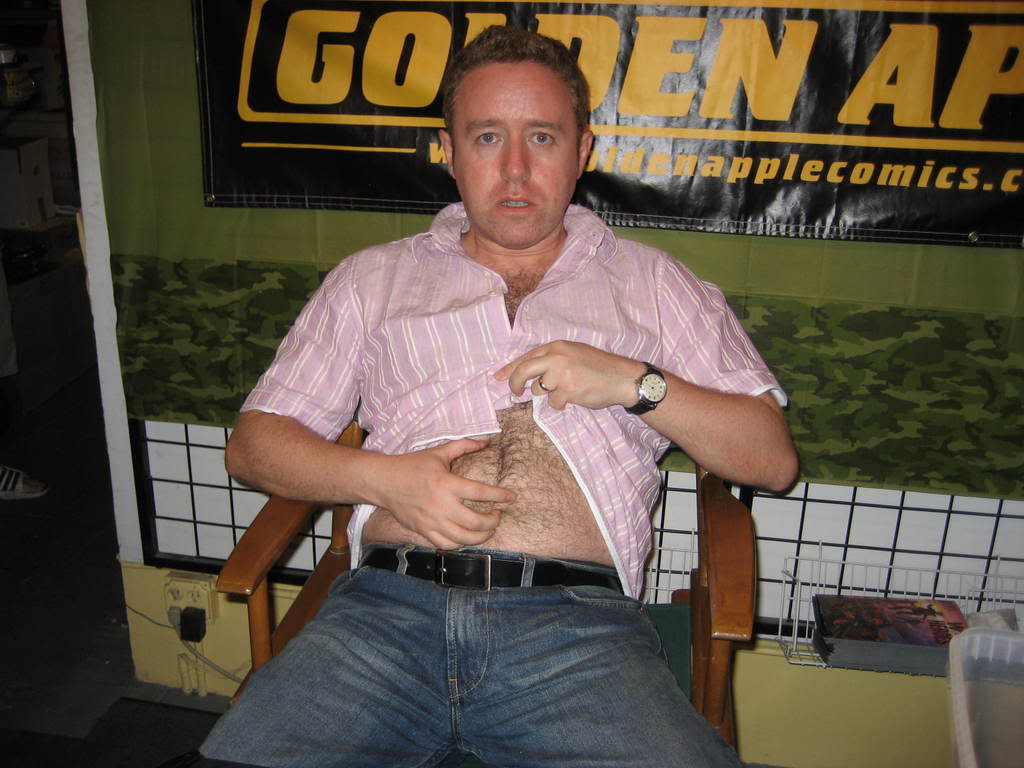 Can someone please send me some more headshots of Mark Millar, (I know you movie people read this site!), because it’s becoming clearer every day that I’m going to be writing more and more about this guy. In today’s Millar news we have word that the man in charge of Fox’s Marvel properties just finished visiting the set of Kick-Ass 2 and has nothing but great things to say about the film. He had such a blast that he sought time in his hectic schedule to announce his findings in his millarworld forums:

Three of the days were press interviews, all embargoed until a few weeks before release, but the rest was just sitting around and drinking tea while superheroes beat the sh*t out of super-villains in the big finale (as you’ll have read in the book). As a producer, I’ve been watching a lot of this in the dropbox as it happens, but nothing compares to seeing Mother Russia (in the flesh) pounding Hit-Girl in the face in what WE KNOW is going to win MTV’s Best Fight Scene Award already.

I’m not kidding… this fight is unlike anything I’ve seen in cinema before. I’d watched the stunt team block it out a few weeks back, but this was astonishing. The movie is being edited as happens and so, at the halfway point in shooting, I have about 40 edited minutes to watch in the suite during lunch-breaks. Blown Away is an understatement. everything is working perfectly and Vaughn was correct when he told me to trust his judgement when he hand-picked Jeff Wadlow for this gig. This feels like the next chapter of something we all dug a great deal, incredibly consistent with what came before, but at the same time going a little darker and a lot bigger as Dave joins the team.

He also brought up his work as a creative consultant for Fox and that three more of his comics will be turning into films, though he didn’t say which ones.

I’m helping prep three other Millarworld movies at the moment (two you should hear about in next week or two) for late Spring shoots and so home again and writing. Also writing up lots of Fox plans right now and brain barely keeping tabs on all the various, genuinely thrilling things coming up from that line of movies over the next 2-3 years. So I’d better get back to work, but just wanted to give you all a wee progress report and let you know that Kick-Ass 2 could not be going more beautifully.

They’re editing as they go, huh? That’s an intresting approach to cut down on production time and probably the Matthew Vaughn method when he made X-Men: First Class considering the short development time. I’m sure the stress on all those involved is just a smidgen more hectic as a result, but whatever helps give these wonderful adjectives used by Millar provide more meaning. In other words, hurry the hell up already.