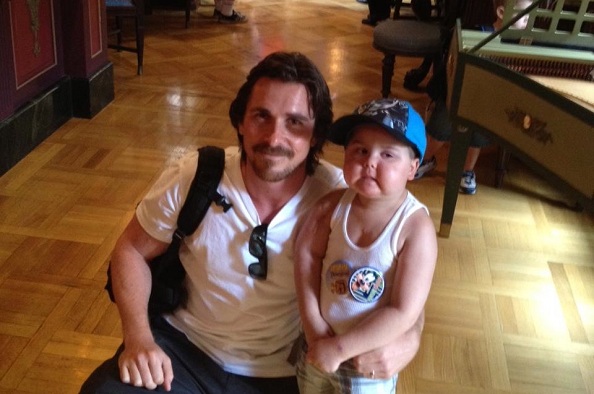 Earlier this year we heard about Christian Bale’s personal visits to the victims of “The Dark Knight Rises” Aurora shooting. Christian Bale has popped up in the news again for recently flying a four year old cancer patient and his family to Disneyland. Jayden Barber was diagnosed with bone cancer back in 2010 and the condition turned into MDS leukemia. After a failed bone marrow transplant, Jayden is now in remission. After hearing of this, Christian Bale paid for the family’s trip to Disneyland and ensured that they all got the royal treatment. He later joined them for a quiet lunch at Disneyland’s Club 33 this past week.

The entire interaction was like old friends having lunch. Jayden did not get star struck but was well aware of who we were with!” she gushed. “They talked movies and super Heros an he was genuinely happy to hear about everything Jayden wanted to tell him. Christian, his wife and daughter are three of the most beautiful people we have ever met! Christian made these arrangements for us personally and ensured we were treated like royalty. I don’t have even one negative thing to say about them. I can tell you that they were just as impressed w Jayden as Jayden was w them :)

Some of you may call this a publicity stunt but Christian Bale isn’t taking advice from his publicist on these random acts of kindness. He is staying away from the media and the photos shown come from various social media outlets, not the press. Christian may have had some outbursts in the past but honestly who hasn’t? He’s taken his own personal time to be with these people rather than taking the easy route of just giving them some money. I truly admire what he is doing with his fame, it is very honorable and I think this makes him a hero on and off screen.