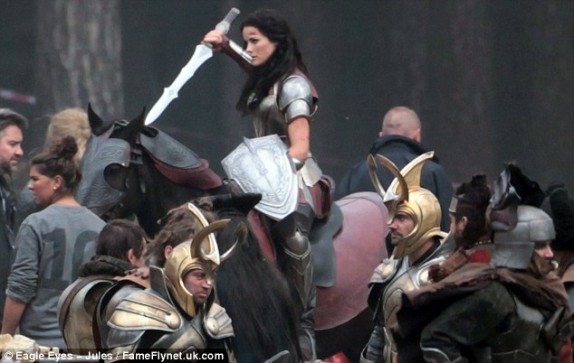 Dude I’m all sorts of excited for this new Thor movie. Why sugercoat it? I was never really followed the comic or character all that closely in the past and didn’t really have high expectations for the first movie cus it was just some viking guy with a hammer. That’s a movie? Hell yeah it was a movie and while I still don’t read the Thor comic I make sure to keep an eye out for him in the Avengers books. He’s kinda cool with his surfer dude look, funny king’s speech, and his Hammer. The next movie is in production with a kinda cool title and fun looking cast and promises to be a larger scale film this time around. Check out some set photos showing off Sif and pre-requisite ‘splosions below:


Cool stuff. Big ass war scene. Not sure what the hell is going on but we can rest assured that Tom Hiddleston will be in the movie and that should make it a guaranteed Oscar contender. Or at least satiate the insane amount of female fans this guy has generated due to his portrayal of the trickster. I don’t see any Dark Elves or magic hammers flying about so maybe better internet sleuths will chime in to help clarify what the fuck is going on. Any guesses?