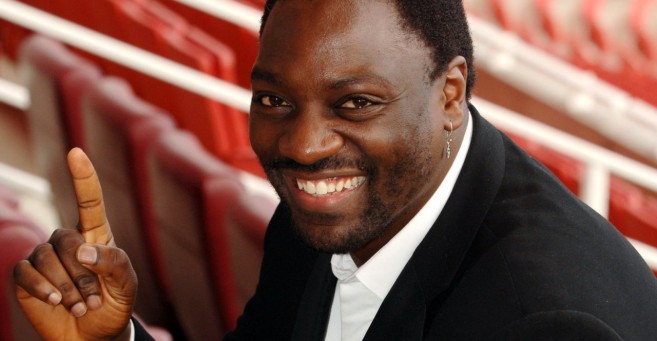 I just found out that Adewale Akinnuoye-Agbaje has joined the cast of the upcoming “Thor: The Dark World” and will be playing the character(s) Algrim the Strong and Kurse.

Adewale Akinnuoye-Agbaje (GI Joe, “Lost”) has joined thecastof Marvel’s “Thor: The Dark World” as one of the lead villains, playing the dual roles of Algrim the Strong and Kurse. Christopher Eccleston will play primary villain Malekith the Accursed,the rulerof the Dark Elves of Svartalfheim.

And for those who are wondering whether or not they should be excited I’ve gone ahead and done the Wiki search for you to save you the trouble:

Kurse was originally the most powerful of a race of Dark Elves, and was known as Algrim the Strong. He is coerced by the Dark Elf ruler Malekith the Accursed to fight the Asgardian God of Thunder and superhero, Thor. Malekith, however, betrays Algrim while he is fighting Thor, and in a bid to destroy the Thunder God orders that a pitfall beneath the two be opened. Thor saves himself courtesy of his mystical hammer Mjolnir, while Algrim falls into lava. Algrim’s enchanted armor saves his life, but he is still critically injured and develops amnesia from the shock.

Algrim is completely amnesiac, except for his obsessive desire to gain revenge upon Thor. Algrim is later healed by the cosmic entity the Beyonder, who transforms him into the much more powerful being called Kurse, who is apparently twice as strong as Thor.

This actually sounds like a really fun role for Mr. Ecko and I don’t think I’ve seen him attempt to portray a character like this before. It’s a bit of a stretch and might take the guy out of his comfort zone so I hope he doesn’t wind up hamming it up. I used to petition for this guy to portray T’challa, A.K.A. The Black Panther in a Marvel film. Alas I believe the guy is passed his prime and is no longer the best candidate for the role. But those same concerns I have for him playing The Black Panther are also valid for his portrayal of Kurse. From my understanding Kurse is supposed to be smacking around Thor in the film and really, can this guy take on Chris “Thor” Hemsworth?

One thought on “Adewale Akinnuoye-Agbaje joins “Thor: The Dark World””