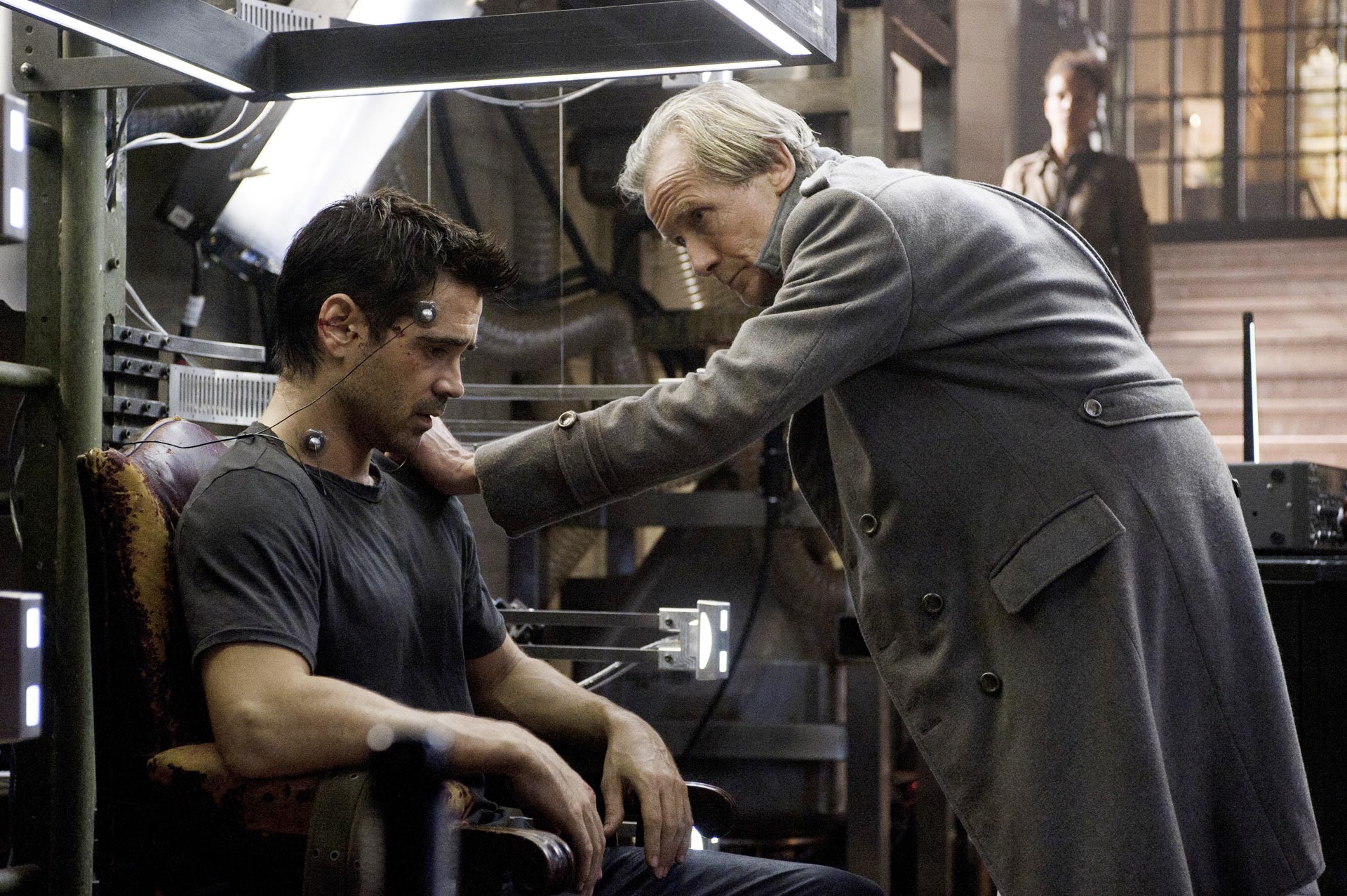 Before watching Total Recall 2012 I made it a point to watch the 1990 version with Arnie. When I first saw the previews in theaters I immediately realized that in order to fairly review a remake, I must see the former. However, watching this movie was like viewing Minority Report, Terminator, Blade Runner, The Fifth Element, The Matrix and some other sci-fi movies all in one setting. I even had an after taste of Fight Club thrown in there since it made the audience question what was real and what wasn’t.
I’m sure Director, Len Wiseman and the writers for this film had the advantage of being influenced from visual aesthetics from films prior to this one. I felt as if they had to push harder to live up to Philip K. Dick’s storyline from the 1990 version. Perhaps they went overboard.

Starring Colin Farrell (Fright Night), Kate Beckinstale (Underworld: Awakening), and Jessica Biel (New Years Eve), this movie takes place in the dystopian future. Apparently the U.S. government has been overturned and humans now live in a dirty overpopulated area with little democracy. It’s now called the United Federation of Britain (UFB) and the Colony as the future people. To add, there’s also a direct connection to the Earth’s core via public transit.

Douglas Quaid (Colin Farrell) has what appears to be a mid-life crisis and begins to question his purpose in life. Douglas wants to know why he keeps having dreams about saving the world with some chick named Melina (Jessica Biel) while being married to his hot wife Lori (Kate Beckinstale). He’s bored with his routine lifestyle with making killer robotic machines in factories, so he turns to a company called Facebook Rekall as his last resort. The perks? Well it provides their clients fake memories of what they would like to become. People get to invent totally different personas of themselves just for kicks. We eventually see that there’s more to Douglas’ dreams than we think (shocker).

The color scheme of this movie reminded me of Wiseman’s Underworld with the dark blue and greys in its tight color palette. The action scenes provided as much excitement as watching my dog run up the stairs. Perhaps the director thought the bloodless PG-13 fights with suffice along with having blurry chasing scenes. Farrell does do a good job of acting as if his memory was wiped clean on screen. I do not know if that’s saying much since it’s not hard to live up to Arnie’s acting in the previous one. Beckinstale is one cold-hearted bitch that made me wonder if she was Dark Vader’s lovechild and Luke Skywalker’s evil twin.

Biel did a good job playing the reliable sidekick however the chemistry between her and Farrell was about as dry as a raisin. In fact, they could have been better of being siblings instead of romantic interests. Despite the special effects and paying homage to the 1990 version, it was as if everything was overplayed with the acting and plot altogether.

I feel like this film had potential with the choice of actors and characters but unfortunately the writers had something missing with this movie maybe that was lack of originality. I went in expecting the film to be revamped with creative production designs and a plot with depth. Unfortunately the writers seemed as if they lost sight of who they wanted their target audience to be, so the film ended up looking like a recycled mess. With that said, I hope to not be able to recall this movie in the future.