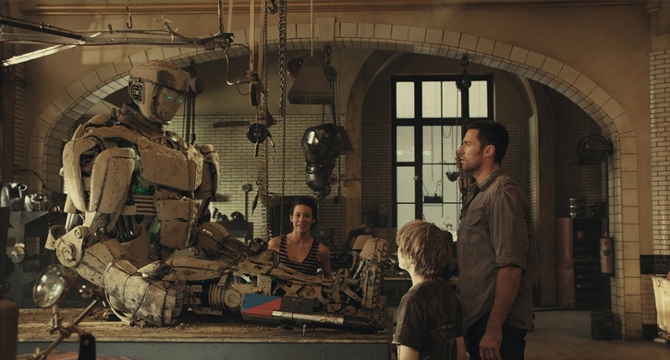 Synopsis
Set in the near future, where robot boxing is a top sport, a struggling promoter feels he’s found a champion in a discarded robot. During his hopeful rise to the top, he discovers he has an 11-year-old son who wants to know his father. Real Steel is a 2011 science fiction/action film based on the 1956 short story “Steel” by Richard Matheson and is directed by Shawn Levy (Date Night in 2010, Night at the Museum franchise in 2006, 2009). The movie stars Hugh Jackman, Dakota Goyo, Evangeline Lilly, Kevin Durand, Hope Davis, James Rebhorn, Anthony Mackie, Olga Fonda and Karl Yune.Review
Why robot boxing? I mean really, why robot boxing? Boxing robots? Really?

When I first saw the trailer to Real Steel – I was incredibly dismissive. It looked like a film which probably had another bloated budget and was based off the old Mattel Rock’Em Sock’Em robot toys. Then seeing Hugh Jackman attached, it’s almost like another cliché action movie all set up. The ‘popcorn’ films that we stroll into and eventually find that seat in the theater marked ‘low expectations.’

Because in truth, there is a good chance we’ve probably already seen worse.

So really, why robot boxing?!

In 2020, the year Real Steel takes place human boxing has become a relic of the past. Gone were the greats who once made the sport of boxing what it was. The respective rise of Mixed Martial Arts soon took over as it catered to various fighting styles, allowing for more combatants. Yet the crowds still wanted more, much more and they were willing to pay for that entertainment. The mortality of a human fighter simply proved to be the world of professional fighting’s folly.

As such automated robots took over and steel provided the crowds what flesh could not – more carnage, more violence, bigger and better fights.

“Times have changed. Fighting has changed. But the crowd? They never change. They just get bigger. The human body can only take so much. But the steel never stops.” Charlie Kenton, Hugh Jackman

There is a strange relevance to Real Steel, if we look at professional boxing today. In recent years the debate of boxing as a dying sport has fans and critics alike wondering its direction. So it’s odd that a movie about robot boxing might inherently be showing us an alternate future. And despite the crazy notion of it, it’s that idea which somehow places Real Steel in reality allowing for the movie to actually work in concept.

I was surprised by this film. You half expect a movie about boxing robots to be placed in a futuristic setting. I expected a Blade Runner (1982), The Fifth Element (1997), Avatar (2009) deleted Earth scene-esque environment. I don’t know! Just something that would support a world where robot boxing is regarded as a professional sport.

Instead when the movie opens up we’re treated to a scene of familiar places, Jackman driving a compact semi-truck traveling on an open country side road. The first sense of ‘neon lights’ of the future we get is the illuminating state fair that he is seemingly heading to. The first couple minutes of the film actually had me wondering if I was in fact sitting in the right theater. I thought to myself, “This is an odd setting for boxing robots.” It’s this warm toned nostalgia that director Shawn Levy purposefully uses to establish the storyline in Real Steel. By using visual cues throughout the film, we see that although Real Steel is set in the future, it’s actually story from past films. So much so that that sense of familiar becomes essential.

In the 2004 film, I, Robot, there is a scene where Will Smith’s character receives a pair of Converse Chuck Taylors in the mail. The setting of I, Robot is definitely in a perceived science fiction future, automated cars, society assisting robots, an almost utopian society. An envisioned future where, yeah, quite possibly boxing robots might exist! If there is a point I’m trying to make here it’s that those Converse shoes in I, Robot serve one purpose. A point of nostalgia to a futuristic society of the same world we are from.

Real Steel actually does the opposite or maybe in this case does the reverse.

Instead of using objects from the past to relate to the future, the setting for the entire movie is carefully placed in a world that is familiar. The set design, the subtle architecture with a good ole’ fashioned sense of Americana is enough to show us that yes things have changed, but they’re still somewhat the same. It’s a curious selection as any sense of future is placed minutely and simply. Be it through the devices used, like that of phones and computers or more grandiose in the robots themselves. It becomes more of how interactivity has advanced and it’s especially related to how the robots are controlled.

While the world may have changed, technology may look more visually complex. In Real Steel, the underlying understanding of how things are or work for the audience is the same. The boxing robots might be the out of place visual contrast. But Hugh Jackman’s Charlie Kenton is still the same washed up sports professional/almost dead-beat father that Dakota Goyo’s character Max never had. Evangeline Lilly’s Bailey Tallet is still the potential once or still girlfriend waiting for Charlie to get things right. Hope Davis’ Debra and James Rebhorn’s Marvin are still the aunt and uncle who would be able to support Max better through sole custody. Kevin Durand is still seemingly typecast as that semi-imposing potential antagonist.

In more ways than one, Real Steel proves to be simple. Simple in execution, cinematography and even story and because of this – it’s a good thing. Its family friendly like it tries to be and approachable in the Rocky-esque underdog story both through boxing and the father-son dynamic. In truth, you’ve probably seen this movie before! Maybe when you watched it, it eventually climaxed to the ultimate showdown of Lincoln Hawk winning custody of his son by defeating Bull Hurley in an arm wrestling match. Or maybe you watched it when Rocky Balboa lost in a decision to Apollo Creed, but that didn’t matter. The only thing that mattered was Adrian.

Real Steel isn’t a new film, it’s not wholly original but I can tell you it is definitely just not about robot boxing. There is real characterization in this movie. The film is loose enough that it doesn’t complicate its protagonists or rush to create that absolute antagonist. In a movie that will probably be ultimately defined as that movie with robot boxing, it surprisingly has a lot of heart.

Overall
I enjoyed this film. Real Steel is light hearted, emotional, shamelessly hokey, comical but overall fun and entertaining. I don’t know if I’d absolutely say you must see it in the theater but don’t dismiss it like I did early on when I first saw the trailer. Thinking back on the movie now, the only scene that stands out dramatically is when Shawn Levy does a wide panned shot of Hugh Jackman and Dakota Goyo standing across from one another for the first time. Sometimes watching things on the big screen will emphasize and contrast that particular divide even more so, rather than watching it at home.

The one thing that absolutely works in this movie is the robots. The film doesn’t just rely on CGI. It uses animatronics and uses them well. From the interviews, 29 and-a-half total live-action robots were made for the film. As per Steven Spielberg’s (Executive Producer) suggestion, when a robot wasn’t actually walking or fighting – that should be a real robot. Because of this there is a visceral connection made for the actors on screen and for the audience as well. In respect to when the robots were moving, “simulcam” motion capture was used, the same technology that was developed for and used in James Cameron’s Avatar. It also helped that boxing legend, Sugar Ray Leonard was on-hand to advise and help choreograph the robot boxing fights. Because of this the movements on screen feel life-like and fluid and that uncanny valley doesn’t seem so uncanny.

If the actors in Real Steel had real characterization, the robots in the film, especially that of Atom had humanization. We don’t get the fast cut editing from the Transformers franchise. The slight difficulty to see and understand what is happening on screen isn’t present. Everything just works. The real supporting character to the movie is Atom, who doesn’t need Peter Cullen’s voice to make him likeable.

There are still flaws to this movie, there is still predictability. But for some of you, Real Steel might be the underdog you like to secretly cheer for.