I hadn’t been aware of this at all until just now, and I find it utterly silly and I am just in love with it.

There is a Russian film produced by the same guy who brought us Wanted and its called Black Lightning. Timur Bekmambetov calls this the Russian response to Transformers and Batman.

Check out the wicked poster that looks like Hayden Christiansen is staring in a futuristic Chitty Chitty Bang Bang/Flubber with a logo ripped off from Pixar’s Cars. 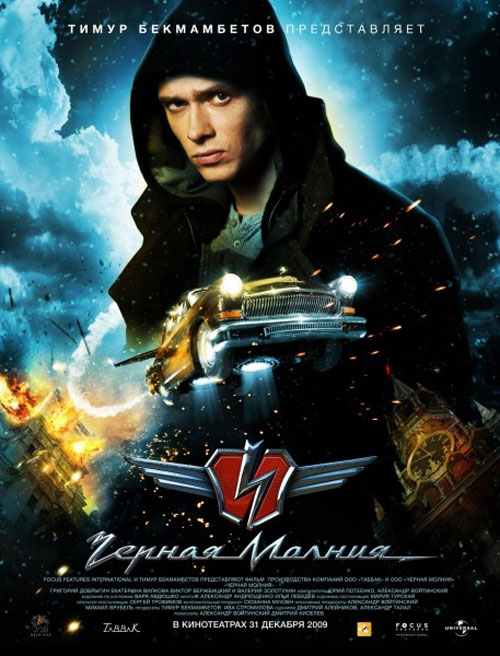 The movie is about a student from Moscow University who becomes the owner of a ordinary looking car. He finds out that the car is able to fly, and unexpectedly finds himself in a role as a defender of the city against evil doers.

The film was made on a budget of only $8 million dollars and it looks pretty damn good. It looks like it had to budget of at least $30 million.

Check out the trailer:

And while that gives you an idea of the visuals ($8 Million? So thats what a movie costs when you don’t cast a $20m actor huh?) and in case you didn’t speak Russian, here is the translation as provided by a Turkish Asian who seems to have translated it from Russian to Japanese to Hindi to English:

Dima: In this world nobody owes nobody nothing. But I’ll be saving this world, because it has … you.
Timur Bekmambetov presents…
Maxim: By the way, I forgot to introduce to you… Dmitriy. Mmm… My driver.
Nastya: Hello, driver.
Dima: When I’ll get the car, I’ll invite you to a date. Will you go?
Nastya: Listen, let’s go out of here.
Dima: But dessert?
Nastya: This is dessert.
Dima: Woo-hoo!
Maxim: Lure a waitress and take her for a drive on a tram. Nastya is mine. Did you get it?
Dima: Ok, Max. Clam up.
Maxim’s father: Beautiful girl, but she sits in the car to other one.
Nastya: You’ve saved my life. And behave like nothing happened.
Card: To Nastya from Maxim.
Maxim: Me?..
Maxim’s father: He’s by air and we’re by air.
Nastya: Look, he will come flying and save him.
Dima: He won’t come.
Dima: Who do you meet New Year with?
Nastya: You should understand me. He saved my life.
Dima: I say, do you love him?
Nastya: Max is Black Lightning.
Dima: No matter who you choose, I always be near.
Maxim’s Father: So, Black Lightning. One last exam is left.
You Must Rise. 31 December 2009. Happy New Film!

Looks like a pile of fun, and the girl is 4 kinds of cute.

I’d watch it if it was released here (dubbed or subbed)!