[Rant] Anyone who has read or listened to The Movie Blog for any period of time knows that I am a Star Wars fanatic. Seeing the original with my mother in the movie theater is my earliest childhood memory. My first pet cat I named Luke Skywalker. I played the Star Wars Role Playing Game (and not the crappy D20 version either… I played the TRUE D6 West End Games system. Gotta love the wild die!).

Go ahead… ask me how many rebel ships attacked the first Death Star. Bet you don’t know off the top of your head. It’s 30 bitches! :)

The point is, I love Star Wars. However, as most of you also know, I (like most people on the planet) were deeply disappointed with the prequels and that piece of shit animated movie they’ve put out over the last few years. Now all three prequesl had their moments… and I even liked Revenge of the Sith ok… but come one… this is STAR WARS!!!! The greatest film franchise in the history of cinema! It should have been so much more. So much better. So much less Jar Jar.

But one of the things that really bothers me in the anti-Star Wars wave that’s been going on the last few years (much of which is quite deserved) is the nonsensical way that a lot of people have blindly pointed the finger at the technology as being the problem. I’ve heard so many people lament and whine over the years about how Green Screen ruined the Star Wars franchise. That somehow modern technology take creativity and imagination OUT of the filmmaking process. That computers sapped the imagination out of Star Wars.

This (to put it in technical terms) is absolute bullshit.

This picture below has been making it’s way around the web today, supposedly illustrating the reason why the new Star Wars films were so much weaker than the originals. People have been commenting on the picture about how it symbolizes everything that was wrong with the prequels too… which is ridiculous. 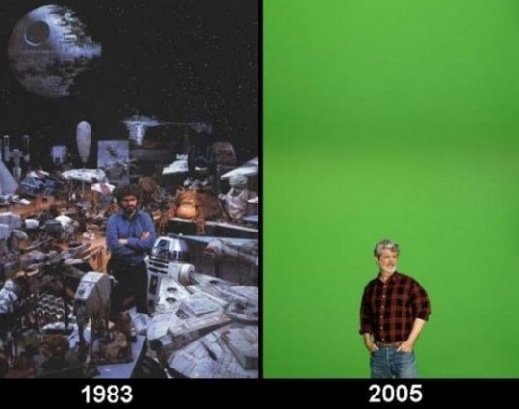 Is anyone going to look at me with a straight face and tell me that the Pod Race scene in The Phantom Menace (one of the few good scenes in the movie) would have looked better with models instead of CGI? Not a chance. Can you say anything LOOKED better in the original movie than they did in the prequels? No, obviously not.

Oh sure, the nostalgic side of us would have liked to see the old Yoda puppet waddling around, but let’s call a spade a spade. The CGI Yoda looked and moved and “acted” a whole lot better than the puppet did. Don’t get me wrong, the puppet was fine back in the 80’s when that was the best option. But the CGI Yoda moved and breathed, had facial expression and an actual performance. It was, in every way, shape and form a better way to do Yoda.

The tools today have changed, advanced, given filmmakers more options and FREED their imaginations to go beyond previous limitations. But like before, the imagination does not COME from the tools, nor do the tools create or limit the story. They are simply the vehicles used by filmmakers to express their creativity and imagination.

It frustrates me a little bit when I hear some of the exact same people who lament the use of green screen and CGI technology in Star Wars then turn around and talk about how much they loved the new Star Trek (special effects done by ILM by the way… Lucas’ company), or talk about how fantastic James Cameron’s new film will be (all using heavy fx technology). How do you think they made Star Trek? Lord of the Rings? Transformers? Spider-Man? X-Men? Harry Potter? Jurassic Park? Etc. etc. etc.

Anyone who watched the very impressive DVD features for the Star Wars prequels know just how much physical visual effects and models were still used for the films. Those arts are still there… but some things call for the use of newer tools.

Laura Linney and Elizabeth Debicki And A Special Night At Netflix

Avatar The Way of Water: Out of Theater Avatar Reaction