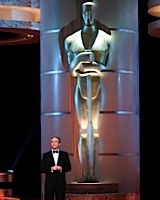 I make no secret about it. Besides Christmas, the Oscars are my favorite time of year. Since I’m a movie freak that really shouldn’t surprise anyone. The one day that we celebrate the year that was in the movie world is something I look forward to every year. I know it’s the cool thing to talk smack about the Oscars, but to me it’s one of those things I count down to every year. I’m kind of a loser that way. And for those who like to point out that the Oscar ratings were down last year… don’t forget that aside from the Superbowl it was still the highest rated television broadcast of the year.

Anyway, every year as we approach Oscar season the speculation starts over who will (or should) host the event. I have some very strong feelings on this issue. First and foremost, since it’s the night to celebrate the world of MOVIES, I prefer to have a MOVIE personality host the event rather than a comedian or TV personality. Call me crazy. I don’t see why you’d get Slash from Guns N’ Roses to host the Tony Awards.

With that being said I’ve put together a list of 15 possible hosts for this year’s Oscar ceremonies with what I see as the pros and cons for each potential host. I’m listing them in order of my preference, not in order of what I think their actual chances are of hosting.