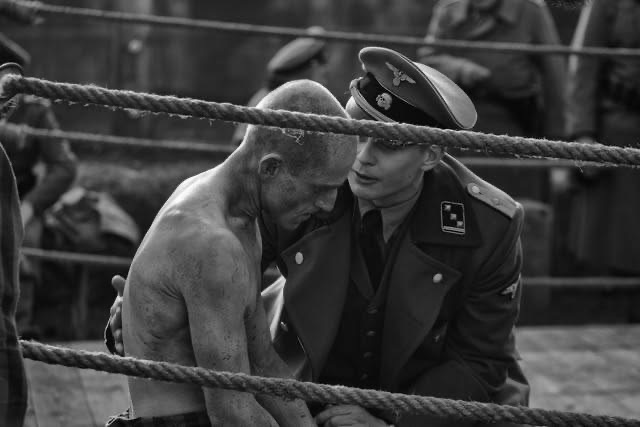 Ben Foster stars in the true-life story of Harry Haft, a Polish Jew who survived Auschwitz boxing other prisoners for the enjoyment of the Nazi guards. The stakes were high; the loser was shot or sent to the gas chamber. Based on his son Alan’s book, “Harry Haft: Survivor of Auschwitz, Challenger of Rocky Marciano,” it’s also a love story about Haft’s relentless search to reunite with his first love, the driving source of his survival.

We chatted with Barry Levinson on the temporary red carpet, which was in the synagogue’s mammoth vestibule, next to a table filled with pockets of Kleenex.

Paula Schwartz/TMB: You’ve made such a variety of films on so many different subjects… “Diner,” “Bugsy,” “Wag the Dog,” Good Morning; Vietnam,” and “Wizard of Lies” just to mention a few. What drew you to this subject? Did you wake up one morning and think the only thing missing here is a Holocaust movie?

Barry Levinson: That’s funny. I got the script and it wasn’t like I’m thinking I want to do some kind of Holocaust film. When I got the script it reminded me of an incident when I was a child.

One day a man with a Polish accent showed up at my grandma’s door in Baltimore when I was 5. He was described as my grandmother’s uncle. My parents and grandparents lived together. Anyway, he slept in my bedroom across the room. And I don’t know anything about him, and he’s having these nightmares and screaming in a language I don’t understand. And I was too young to know, and my parents wouldn’t talk about the Holocaust or anything else when you’re a five-year-old or whatever.

TMB: This sounds like a scene from your movie “Avalon.”

BL: Yeah. Exactly. I described it in “Avalon.” My mother never explained the trauma that was the cause of his screaming until many years later when I was much older.

When I read this screenplay, I was thinking well, in terms of post-traumatic symptoms, and that stuck in my head and that sort of popped up immediately. I thought, well, this is something that I can get interested in, enough to pursue.

Well, because it’s one of the things that for a lot of parents, the idea of talking about it was so terrible that you don’t want to. For a child to know that, got to be older. So when I was 16 years old, my mother talked about Simka — the man’s name — and that he was in a concentration camp, now because I’m older and not at a young age and it stuck in my mind.

TMB: But what was it about Harry Haft’s story that made you want to tell his story?

BL: Well, so to me, it’s about the post-traumatic stress disorder that affects so many people. It’s one thing to survive something. Some people can get on with their lives and all is well. Some struggle because they’re haunted by the past. And I thought that’s an interesting story to see how he can finally find, in a sense, some kind of internal peace. Finally, be able to really engage life as opposed to being stuck in the past… As he says in the Survivor, you know, “The past. The past keeps coming back all the time,” and he’s haunted by it and the guilt of it all. That he survived and others didn’t. 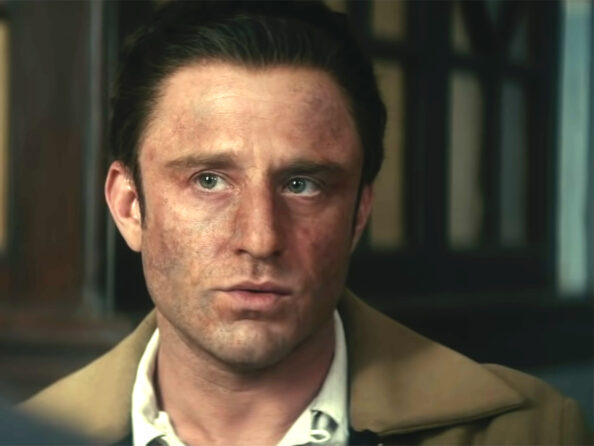 TMB: In The Survivor, he’s a complicated person, neither villain nor hero. Was that part of the appeal of his story?

BL: Yes, no, because he’s just an average man, in a way, who’s trying to find his way. Who survived, but to survive is one thing. To be able to finally engage in life and just get on and deal with people on a level that you’re just doing that, rather than constantly being haunted by elements in the sense of guilt that we survived and all of that. So, it makes it interesting. There’s not a hero. There’s just a man, trying to live a life and raise a family and be married to a woman.

TMB: Ben Foster made his movie debut as a fresh-faced 17year-old in your film “Liberty Heights,” one of the quartets of your auto-biographical films. What made you choose him for this very different role as Haft?

BL: Well, he grew up and he did a lot of movies and he was sensational. He’s one of the great character actors, I think, in the business. He really is exceptional. When you see the Survivor, you’ll see how amazing he is. I mean, to me, I think it’s as honest a portrayal as you can possibly get where a man who’s done things that are not honorable is struggling with his past. I think it’s an honest portrayal of the man. 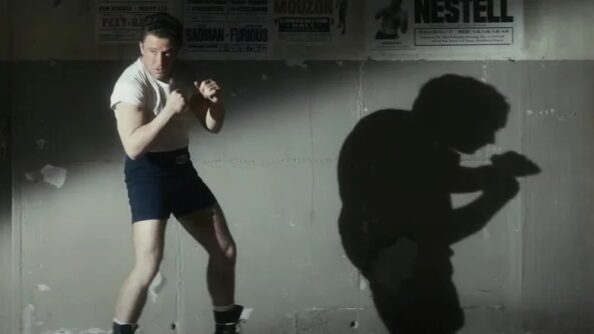 TMB: Ben transforms himself physically in the role in a way that’s quite astounding. He’s emaciated in the Auschwitz scenes, puts on 50 pounds of muscle for his post-war boxing bouts, and looks beefy as an older man. I know you offered that he could do his body transformation digitally, but he decided to do it for real. Were you concerned if that was healthy or even doable?

BL: He had people, you know, carefully watching what he was doing but he felt it was important to be able to understand the physicality of it all. So, we talked about it and he felt strongly that that’s what they would do, and they would take careful steps to do all that, in terms of health. And you know, for his process at the end of the day, I mean you have to kind of trust an actor. You say, “Okay, if you want to go that direction, then you want to…” And so he felt committed to it and that was it.

TMB: You’ve made so many of your movies, like “Wag the Dog” in 30 days, and this one took like, six, seven months?

TMB: This movie? And considering his weight change and everything, how long?

BL: Because we shut down and then we came back and did another section of it. But it was only 34 days to do this whole movie.

TMB: You began this movie two years ago, before the war in Ukraine, which adds another layer of poignancy to The Survivor. Talk about that.

BL: All I can think of when I watch it and you’re seeing some of these people you know, leaving the country. God knows what will happen, you know, all the bombing and all that stuff. And then you say, “What is it going to be like for them? And how much of what they’ve endured going to affect them going forward?” And so, whether it’s the camps. Whether it’s soldiers or warfare and the horrors that they see, people trying to get out of the Ukraine… it’s an element of the darkness of it all, and the survival, and yet the trauma that doesn’t necessarily go away. 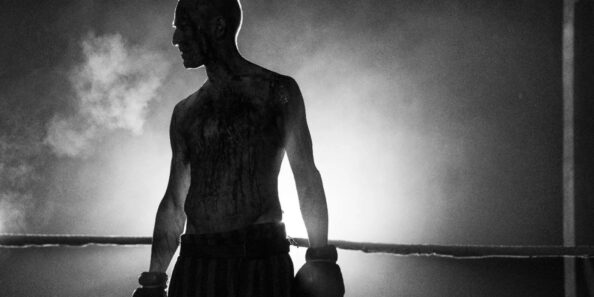 As I say, some people do just say, “Hey, it’s over. You know, it’s over, it’s over.” As the brother does in this film. He’s able to say, “The past is the past and that’s the end of it,” you know? He’s able to do it, but Harry can’t. Whether it’s Harry or whether it’s people in the Ukraine, soldiers in the past, or other people in all kinds of horrific situations. What will happen to those people when it’s over?

TMB: Maybe you’ve earned something lighter next? Is a comedy next?

BL: I haven’t done a comedy in a while. I would love to do a comedy, but I haven’t found anything that motivates me.

TMB: Is it safe to say this is your first movie premiere in a synagogue?

BL: Yes, first time. Pretty swell, though, I must say. If you’re going to make a Holocaust film I can’t think of a better place…