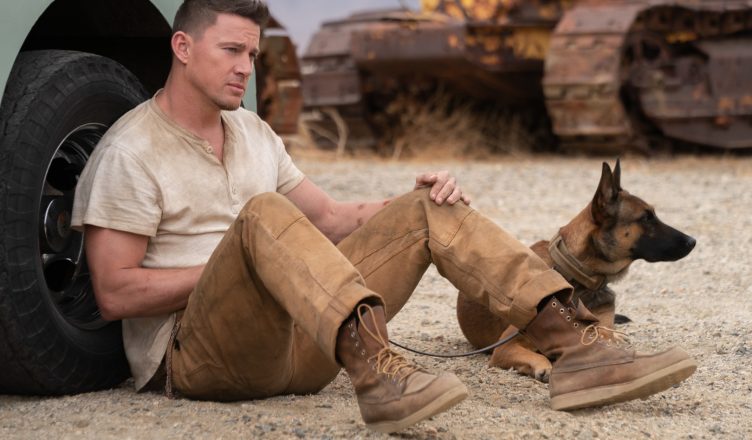 Dog, out now in theaters. His co-director on the project was Reid Carolin, who also co-wrote the screenplay in collaboration with Brett Rodriguez. The movie clocks in at an hour and 41 minutes and follows the adventures of a Belgian Malinois service dog named Lulu and our hero, Channing Tatum, as the dog is driven to a funeral of his previous handler in Arizona by Tatum. 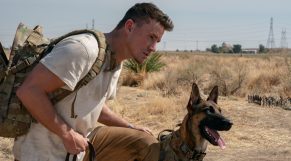 Lulu’s previous handler in Afghanistan, Riley Rodriguez,  committed suicide-by-car-accident back home in Arizona, and the family would like the dog at the funeral, so Channing Tatum, as Jackson Briggs, is elected to transport the canine. Briggs hopes to get a pass to deploy once again, as his many tours of duty have left him with some heavy-duty head problems, and that may be his reward for taking Lulu to her master’s funeral.

In other words, the owner of the dog obviously suffered from PTSD after serving in a combat zone and had a death wish. It would appear that Jackson Briggs (Tatum’s character) has the same death wish, as he is eager to return to a war that will probably kill him. The Ranger brass are reluctant to authorize another deployment. If he will undertake this picaresque journey to Camposanto Cemetery, Briggs might get his wish, foolish though it seems.

This is the directorial debut for both Channing Tatum and Reid Carolin, but they keep the focus on Briggs and the dog (Lulu, as portrayed by three different dogs, named Zuza, Bula and Lana 5). Tatum interacts with his non-human co-star very naturally and the movie has good music, great cinematography, and some nice moments.

While driving to their destination, Briggs feels they should try to have some fun. The clips we see where Briggs pretends he is blind to get a free suite at a posh hotel provide one such detour. Another happens when Lulu escapes and Briggs has to chase the dog through rugged mountain terrain. He stumbles upon an undercover pot operation run by someone even larger and more muscled than Channing Tatum. That character (Gus) is played by the heavily tattooed Kevin Nash, and his hippie soul mate in the boonies is the recognizable character actress Jane Adams, portraying Tamara.

There is an attempt by Channing Tatum to find a willing sexual partner for the night  in a bar, which fizzles. A decision is made to revisit Lulu’s litter mate brother, who is being trained to re-enter polite society by a former Ranger buddy. There is also a detour during a frightful storm, where Briggs and the dog take shelter in a barn to wait it out. 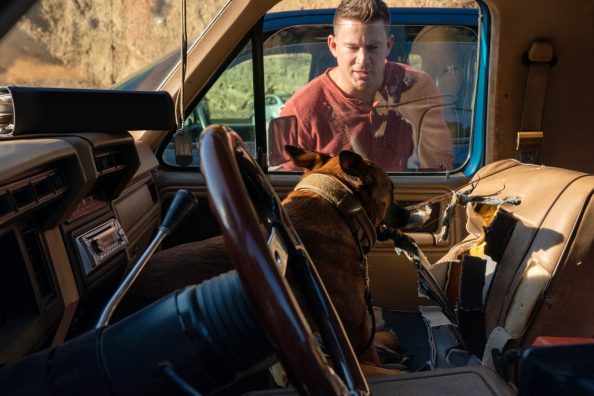 Finally, as it must, the film gets us to the church on time. Or, in this case, to the cemetery just in time.

Anyone who stays through five minutes of the movie can predict that the ex-Ranger who seemed to be nursing a death wish before meeting the dog now has a reason to live, and, if it isn’t spelled out in scene after scene, we have the line, “Thanks for saving my life,” with beautiful cinematography by Newton Thomas Segel, coupled with great song selections from Season Kent (music supervisor), with old Kenny Rogers lyrics (“The Gambler”) like “Know When to Hold ‘Em.” The original music by Thomas Newman is also quite good.

So, mission accomplished for  Channing Tatum, Reid Carolin and the audience.

The movie was enjoyable and heart-warming and the dog(s) do a great job of ingratiating themselves to the audience. It was one of two new films released on February 18th (the other was the Mark Wahlberg/Tom Holland opus “Uncharted”) and we selected it over the carefully scripted adventure yarn of buried treasure (Haven’t we had enough of buried treasure?).

One slightly negative comment. We learn that Jackson Briggs has a three-year-old daughter. He visits her house, Mom comes to the door with a smile on her face, but Briggs is in and out of that house in under five minutes. He spends no time talking about his daughter, nor does he seem particularly intent on seeing her again. Yet, by the film’s end, we know that Jackson Briggs is such a caring individual that he will adopt the combat dog in order to save its life. So, does this mean that our hero would choose mentoring and adopting a dog over taking care of his own three-year-old child ?

If so, it does diminish somewhat the likeability and appeal and charisma of our lead character. I’m wondering if this entire sub-plot of the almost non-existent and clearly forgotten daughter would have been better left on the cutting room floor? It did not make me like Briggs more, While applauding his dedication to the lead dog of the story (Lulu), totally ignoring his daughter for a period of  years did not come off as admirable.