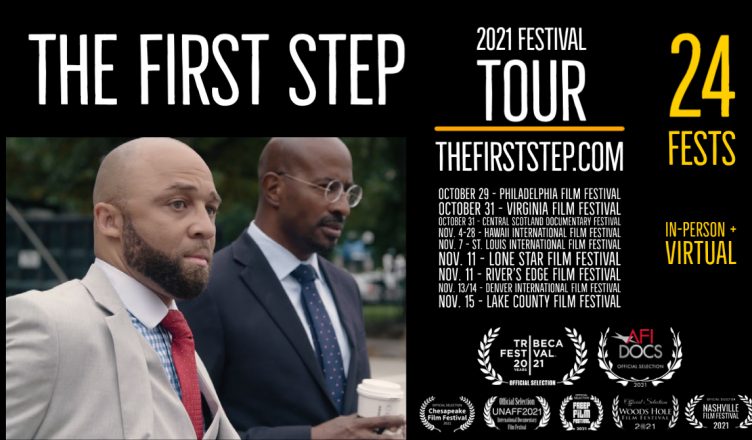 When I saw that Kartemquin films was involved in the Van Jones documentary “The First Step,” now showing at the Denver Film Festival (and 23 other festivals), I was optimistic. It’s a 90-minute film directed by Brandon Kramer, with cinematography by Emily Topper and music by Joshua Abrams. If it’s backed by Kartemquin, it’s usually good. The topic of “The First Step:” prison reform.

Here’s what the “New York Times” said about Kartemquin: “There are few film production companies in the United States as admirable as Kartemquin Films, the nonprofit documentary house founded in Chicago in 1966 that was subsequently responsible for such outstanding, illuminating works as “Hoop Dreams” (1994) and “Abacus: Small Enough to Jail” (2016).

“All the Queen’s Horses” (2017) about Rita Crundwell’s embezzlement of $53 million in Dixon, Illinois–the largest case of municipal fraud in U.S. history—was another outstanding Kartemquin documentary.

As a Chicago-based journalist, aware that Chicago-based Kartemquin’s films have received 4 Academy Award nominations, won 6 Emmys, and collected three Peabody Awards, I was enthusiastic about this story of Van Jones’ attempts to help successfully shepherd a bill for criminal justice/prison reform through Congress. Bring it on!

There are some exchanges between subjects in the documentary that stay with you, as when Jones’ assistant, Louis Reed, who spent 14 years in prison, is dismissed rather abruptly by a former prosecutor(see clip above). We hear a different ex-convict, addressing post-prison life, say, “Nobody don’t see past McDonald’s for us.”

The original prison reform bill was weak. As initially proposed, the bill had only three proposals. Two of them were so seemingly non-controversial that it’s difficult to believe a crusade was necessary to secure them.

One change proposed that prisoners should be housed in facilities within 500 miles of their hometowns. The other change would ban female prisoners from being shackled while giving birth. These don’t seem like very controversial proposals. but both former Attorney General Jeff Sessions and junior Republican Senator from Arkansas Tom Cotton actively opposed the bill with vigor. Kim Kardashian gets screentime advocating for the bill, so there’s that.

Van Jones’ tactic is to begin a campaign to forge an alliance with Jared Kushner to gain passage for the prison reform bill.

Others on the Jones team have misgivings about trying to work with Donald J. Trump during his time as president through Kushner or anyone else (one member of Jones’ team flat-out refuses to go to the White House for a meeting).

To some, meeting Trump on his home turf is a dangerous and poorly thought-out tactic, since the opposition can frame the meeting any way they want. Van’s meeting with Jared Kushner was a bit like 88-year-old Senator Chuck Grassley (R, IA) appearing onstage recently with Donald Trump and gleefully accepting his endorsement. These actions legitimize Trump, perhaps the least progressive president in  American history.

I heard Van Jones speak in Austin in 2017. “Just do something,” he said. He also said, “Own your need for acknowledgment and maintain visibility,” adding “I was never afraid to be in front of a camera or speak into a microphone – I’ve got something to say.”

This is true. Jones has had something to say for a long time—things with which I generally agree. However, barely mentioning the nay-sayers who brought Jones down (chief among them, Glen Beck) in the documentary seems like a major omission.

Van Jones’ affiliation with a 1990s anti-war group called Standing Together to Organize a Revolutionary Movement exposed him to accusations that he associated with Communists. When he is shown arriving at CPAC, one of the audience members shouts out, asking him if he is “still a Communist.” Jones’ hasty departure from office during the Obama administration, where he was a special advisor to Obama on green energy, is totally ignored.

Former Democratic National Committee Chairman and presidential candidate Howard Dean on “Fox News Sunday” called Van Jones’ abrupt resignation from his post in the Obama administration a “loss for the country.” “This guy is a Yale-educated lawyer, he is a best-selling authority about his specialty. I think he was brought down. It is too bad. Washington is a tough place that way,” said Dean.

Jones, for his part, said he never believed in the so-called “Truther” movement, issued an apology for his past remarks, and said, in a statement, that his involvement with 9/11 conspiracy theories “does not reflect my views now or ever.”

I believe those Van Jones sentiments. But, just as the wisdom of some of Van Jones’ past statements or affiliations are questioned, when the documentary covers his big bright idea of lobbying the White House by befriending Jared Kushner, you have to ask, “Is that really a good idea?” A line that resonated was: “What does it mean when the President of the United States is divisive?” (There’s a topic that we’ve been wrestling with through two impeachments and a coup d’etat.)

Apparently I was not alone in my lack of enthusiasm for Jared Kushner as a conduit to convincing then-President Trump to support a bill on prison reform. Kushner’s father spent time in prison so maybe he’ll be an enlightened proponent for prison reform, went the thinking. (Of course, Kushner still has Saudi, Arabia’s MSB on speed dial; MSB  sanctioned killing and cutting up a Washington Post reporter, Jamal Khashoggi).

The most impressive part of the documentary depicts a program that Jones originated to bring South Los Angeles residents together with West Virginia natives, including the Sheriff of Welch, West Virginia, a community of 50,000 that shrank to 18,000. Welch ranked first or second in deaths from opioids nationwide.

Each group tours the other’s hometown area, including Skid Row in L.A.  There is a feeling that growing mutual awareness could change attitudes. The supportive community approach of West Virginia towards addiction is praised. A member of the Los Angeles group is heard saying, “How do we replicate this in L.A.?”

As for me, I began to wonder what Van Jones’ main campaigns are. He has three best-selling books on Amazon. I’m having trouble pinning down his concerns. Green energy and prison reform seem to be just a small slice of Jones’ town. In this respect, he reminded me of the Reverend Al Sharpton, who always seems to show up at any Black/white imbroglio.

While there are some good nuggets of information about Van Jones, the man, I would have liked more personal information about the ex-wife who shows up briefly onscreen and/or the small children that appear to be his. I enjoyed the shot of Van Jones in dreadlocks while in college at Yale. The trip home to visit his twin sister is great. The failure to give us more information on Van Jones, pre-2021, made the random shouted remark about “still being a Communist” without enough context to decode it.

The shift from green jobs to prison reform: when and why did that become the new Van Jones frontier? What is next on the Van Jones “to do” list? Is it “any old cause in a storm?” Why not just run for office, if he is devoted to societal change?

There’s much to admire in the documentary. The cinematography and music are good. Van Jones is a good-looking and charismatic subject, but he is only peripheral to the theme of trying to help pass a bill advocating prison reform, when I, for one, wanted to know much more about the idealistic emissary at the heart of the campaign. The documentary was 90 minutes long and, like many documentaries, seemed to drag at key points, but there’s certainly something for everyone in that 90 minutes.

I’ll be waiting for the one that focuses on Van Jones, the candidate.