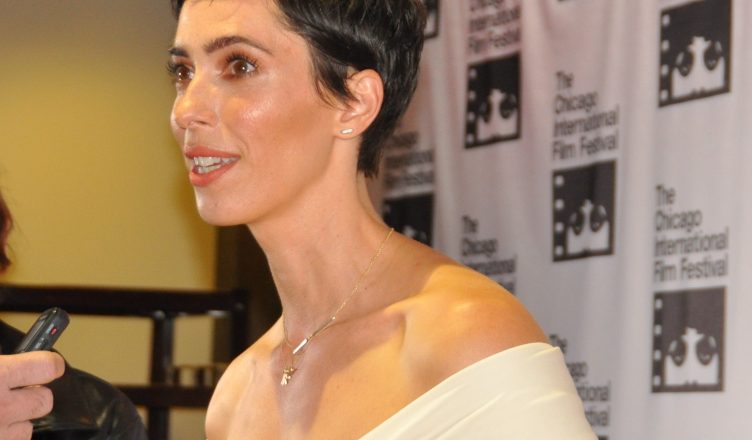 Rebecca Hall screened her directorial debut, “Passing,” on October 20, 2021, in Chicago and was presented with an Artistic Achievement Award by the Chicago International Film Festival. It was the second award she has received in Chicago—the first being a Silver Hugo for her lead in the biographical picture “Christine” in 2016.

Rebecca, who is now 39, had been thinking about adapting “Passing” for the screen since she was 25. She has a personal reason for feeling connected to the theme, with a mother who is African American and was born in Detroit. Maria Ewing, Rebecca’s mom, a Metropolitan opera star, had a Dutch mother and a father, Norman Ewing, who was American Indian, Scottish and African American.

There have been other films about passing for white. “Pinky” earned Jeanne Crain an Oscar nomination in 1949 and “Imitation of Life” in 1959 also dealt with the theme.  The stars seemed to have aligned in 2021 for a timely film on the topic, and Rebecca was the perfect choice to direct it.

As Rebecca said, “I spent 13 years being in awe of that book. I’m still in awe of that book.” She described it as “a tiny book that holds worlds.” She told “Deadline” magazine in 2018, “I came across the novel  at a time when I was trying to reckon creatively with some of my personal family history, and the mystery surrounding my bi-racial grandfather on my American mother’s side. In part, making this film is an exploration of that history, to which I’ve never really had access.”

During the Q&A that followed the screening of the film, Rebecca shared that the script “sat in a drawer for 6 years” while others told her, “You’ll never get this made, and if you do, it won’t be commercial.” The 98-minute film is set to stream on Netflix on November 10th.

It is definitely a thinking man’s (or woman’s) film. As the director described the themes that the book contains, it is about: 1) The many ways we protect lies. (2) Categorization, especially in regards to racism (3) Repressed homosexuality (4) Adultery (5) Marital discord. I read the book, which is a slim novella, and found the ending ambiguous. The ending of the movie is similarly ambiguous and the adaptation is very faithful to the original source material.

I was impressed with the way that Rebecca managed to re-create 1920s New York City fairly inexpensively. As the film opens, we see only the feet of the characters walking on the city streets and the occasional period car passing. Rather than having to re-create 1920 New York City on a larger, more expensive scale, she managed to have the women’s shoes enter a store. The set costs then decline appreciably. Rebecca shared with the audience that the Drayton Hotel of the film was really a tribute to Chicago’s Drake Hotel.

Hall uses some potent symbolism in her film. You will notice various characters, including Irene’s husband, Brian (Andre Holland), staring at a crack in the ceiling. They often are lying on the bed looking up at the crack that represents the fissures in the foundation of Irene’s life that Clare has introduced. Of Irene, who has the more traditional marriage to an African American doctor and has two sons, Rebecca said, “She’s barely holding it together, and her life is a prison.”

Clare is the catalyst for everything that happens in the film. When Irene and Clare meet by accident in the heat of summer, Clare shares with Irene that “I’m not like you one bit. I’d do anything. Hurt anybody. Throw anything away. Anything. I’m not safe.”

As Irene ponders this truth about Clare’s personality, the script—which is very faithful to the book—says, “I’m beginning to think that no one is ever completely happy, free or safe.” The screenplay adds, “We’re all of us passing for something.”

After accidentally breaking an heirloom teapot, Irene also muses that “I only had to break it, and I was free of it forever.” This may help explain the denouement. Or not, because the book and the movie are equally ambiguous when the final credits roll.

Weather is used in a Shakespearian fashion throughout the novella and the film. It is beastly hot when the film commences, but snow is on the ground at the film’s climax.

Rebecca uses black-and-white to tell this story and the 4/3 ratio that, she says, is better for faces in close-up. She shared that her cast was pre-determined and that the only auditions that were held were for the housekeeper, Zulena (Ashley Ware Jenkins), and for the parts of Irene’s sons ( Ethan Barrett as Junior and Justin Davis Graham as Ted).

The music  is by Devonte Hynes, who has 16 composing credits, including “In Treatment.” The light, tripping musical piano piece fits the film and is courtesy of Emahoy Tsegue-Maryam Guebrou, one of Ethiopia’s greatest pianists and a nun who composes and performs compositions.

The one thing that more than one person has mentioned is the casting of Ruth Negga as the light-skinned Clare. She is “passing,” after all. The comments were along the lines of, “This looks good, but weren’t Rashida Jones/Meghan Markle (etc.) available?”

For me, you just have to believe that there is no one who could play the part of Clare any better than the Ethiopian-born Ruth Negga of “Loving.” Hall shared that Ruth was originally being considered for the role of Irene, but that the Academy Award-nominated actress felt that she totally understood Clare’s motives; she was intent on playing that part.

Eduard Grau (“The Gift,” “The Way Back”) handles the cinematography with assurance. The film was a solid accomplishment from a first-time director. Hall has been acting since 1992. With her family background, including a father who founded the Royal Shakespeare Company and 5 half-siblings, all of whom are involved in the arts—often as directors—this is a logical next step for her. It is an impressive debut film and could garner some acting nominations come March 27th Oscar time.