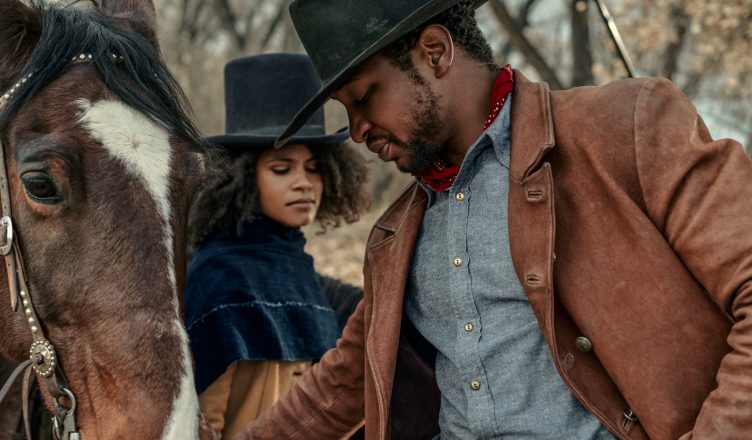 The Harder They Fall Video Review:

The Harder They Fall has such an outstanding cast that any one of the characters could legitimately have their own movie. Jonathan Majors was exceptional in his portrayal as Nat Love. He’s the perfect leading man and he nails the “revenge story” motif with ease. Best of all, this film give Majors an opportunity to show off just a glimpse of his vast range as an actor where he can go from humorous to emotional drama on the drop of a dime.

Next to Majors, Idris Elba is sensational as the primary villain in the story. I loved how he demonstrated his “no nonsense” demeanor throughout the film. You could feel the terror that he imposed on everyone around him; thus amplifying threatening impact his character possessed. He was aided by some other great supporting co-stars too. Regina King is a gem, and she also made her character of Trudy Smith into a force to be reckoned with. 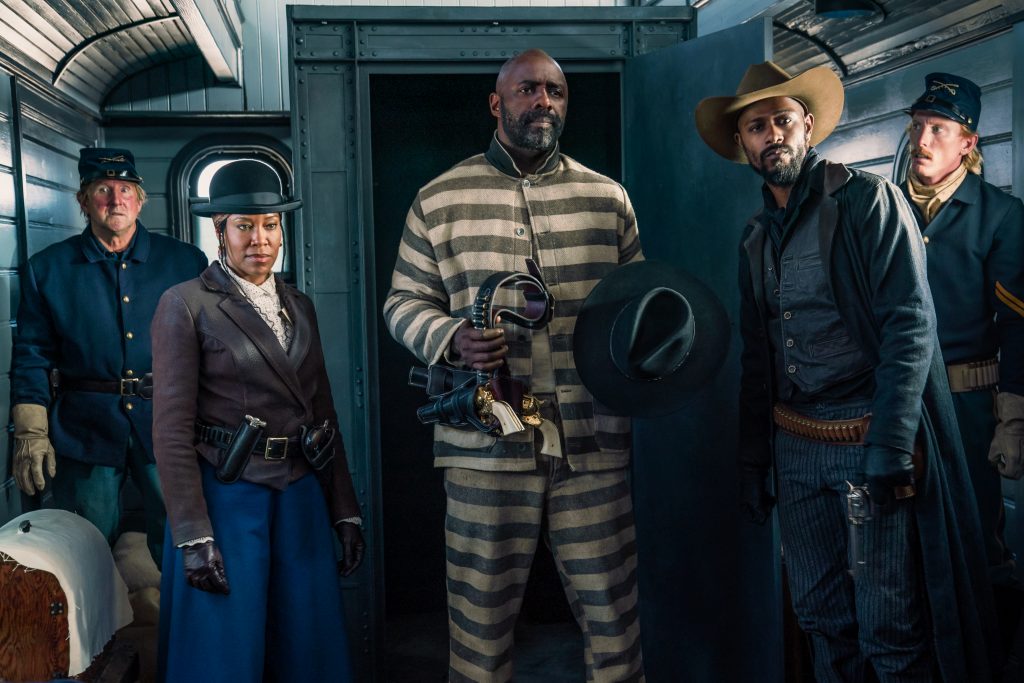 I think the most intriguing character in The Harder They Fall was played by LaKeith Stanfield. His role of Cherokee Bill garnered a love/hate connection for me. He’s a villain in the film, but Stanfield’s performance makes him so compelling and layered. One moment you think you don’t like the guy, and the next you’re almost drawn to learning more about him. I would say that out of all the characters in the film, his role probably drew out the most reactions from me given the situations he’s involved in. 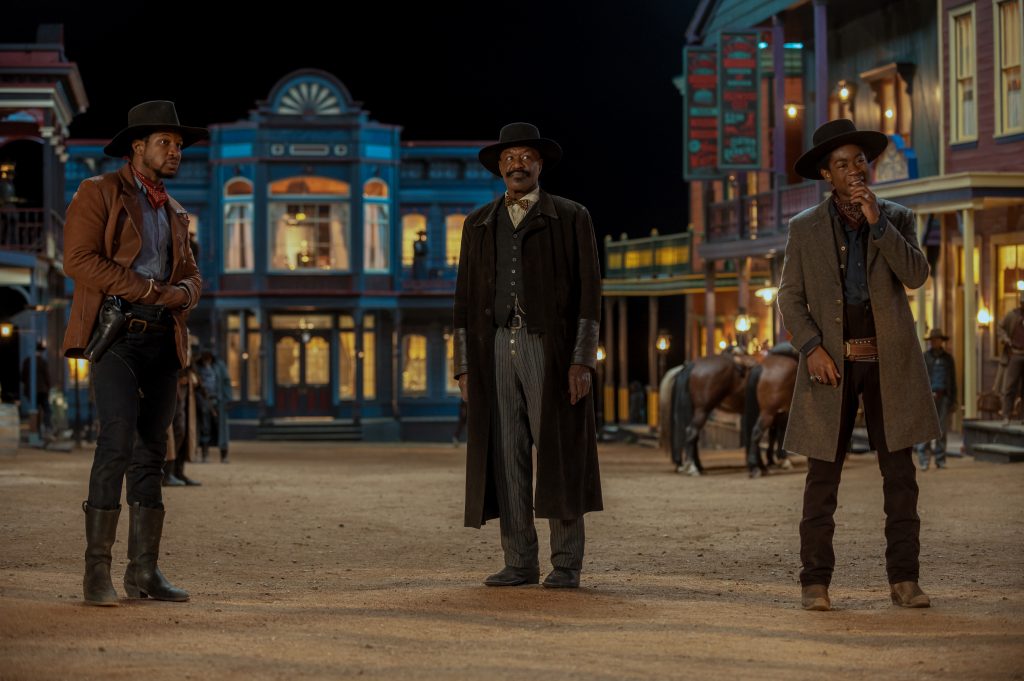 The ball doesn’t stop rolling with this line up characters as I’ve got to give props to the legendary Delroy Lindo. He played an even more legendary role of Bass Reeves (who was the first black deputy U.S. marshal west of the Mississippi River). Lindo delivered a well balanced performance that made his character both fascinating and personable.

Alongside all that star power, RJ Cyler (Jim Beckworth) was a definite scene stealer. He had some of the funniest moments in the film without a doubt. He excelled in many of the scenes that were filled with playful banter and exchanges with other characters. His charisma and style was fascinating. By the end of the film, you can’t help but to feel attached to him in some way.

The Harder They Fall is such a captivating film to watch thanks to some unique cinematography. I was really impressed with the attention to detail in how so many of the camera angles never got dull. So many of the scenes would give you a particular vantage point to help elevate whatever was going on in the story. For example, if we’re in the middle of a standoff, the camera would shift to the reflection of one of the people in the barrel of the gun, or maybe the shot is off center and we’re looking at the tall shadows of the characters. In addition to that, there was a great marriage between the cinematography and set design to enhance the tone at a particular moment. You’ll definitely notice this when some of the characters reach the “White Town”.  All of these little things add up to pure entertainment for a visually appealing experience.

Just like a true Western, The Harder They Fall isn’t lacking in the action department in the least bit. There is A LOT of violence and, of course, gun fights. The gritty action is a fun ride, but I think the real selling point is all the tension that builds up before all the shooting happens. The level of suspense in this film is through the roof. When you get to the classic quick draw showdowns, you’ll be on the edge of your seat waiting to see who will win out. What I loved the most was that many of the outcomes come as a total shock and are not predictable.

I think an extremely minor issue some may point to in The Harder They Fall would be in the final act of the film. There’s a pretty dramatic shift from all the extremely tense action to a slower paced exposition. It felt like riding along a high speed chase, and someone suddenly slamming the brakes. The scene does bring out some wonderful acting with the drama sequences, but the transition maybe disappointing for some.

The Harder They Fall is an instant classic that blends humor, drama and violence all into a Blaxploitation Western. To date, this was easily one of the best films of the year. (Especially on Netflix.) I had a blast watching it and it only left me wanting to see so much more. I don’t care if it’s more prequels or sequels, I’ll take any continuation within this framework and cinematic universe.

I was very appreciative of the opening credits of the film as it states that the characters are based on real life people, but the events are purely fictional. Far too often, films may depict real historical events and the changes they make could give off a harmful impression unbeknownst  to audiences. The disclaimer in The Harder They Fall, small as it may be, relieved my mind of any burden of worry about historical accuracy. It gave me the free ticket of escapism to just sit back and enjoy the ride. I think the other bonus is knowing the fact that because these characters are based off real people, there’s some incentive for audiences to go out and look up their real history too.

The Harder They Fall has the same vibe as Django or Kill Bill. I’d be even more bold to say that this was like if Black Panther were made into a Western. It’s unapologetic in depicting the classic Western genre from a Black lens, and I’m here for it. It checks off all the right boxes to me and is totally the worth the watch in either theaters or on Netflix. Go see it as soon as you can. 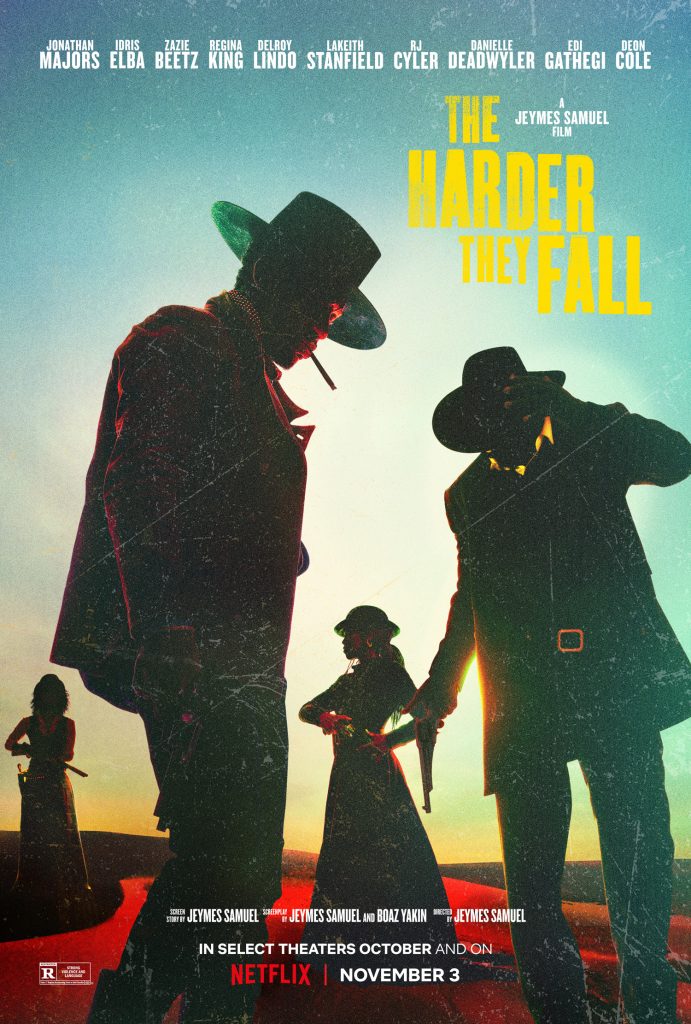