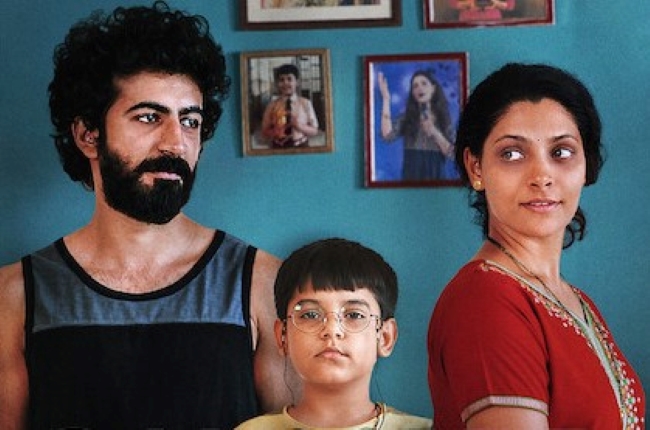 Bollywood got a very unusual movie doing its rounds over Netflix. Titled “Choked: Paisa Bolta Hai” translated as “Money Talks”. Co-produced and directed by Anurag Kashyap, Choked seems to me to be as unusual as Kashyap himself. Jokes apart, if you had gone through my review of “AK vs AK”, where Anurag took on Anil Kapoor”, you will know exactly what I am trying to say!

You must be familiar with the demonitization that happened in India during 2017 where currency notes of INR 500 and 1000 were banned overnight within the country. This led to a hue and cry among the citizens with 500 and 1000 notes turning into bundles of waste paper and banks over flooded with people trying to change their notes with the newly implemented ones. The economy of India dipped drastically during that time to the point that it still could not recover.

Choked features Saiyami Kher as a lower middle class working wife named Sarita Pillai, who is overburdened with the unpaid debts of her unemployed husband Sushant Pillai (Roshan Matthew). They has a son named Sameer (Parthveer Shukla). Sarita works as a bank teller and is the breadwinner of the family while her husband Sushant remains unemployed most of the time and makes some small easy money by cooking up some useless financial schemes with his neighbours. They stay in an apartment in Mumbai, India and due to Sarita’s work pressure there are frequent clashes and quarrels between the two.

Now unknown to them and all other apartment residents, an unknown man brings a cash-loaded suitcase in their building every day. He stuffs the cash in a bag and stuffs it in the bathroom drain on a daily basis. Actually he hides the cash this way and this type of hidden cash is what you call as “black money”.

Due to the man’s dumping money in the drain on a regular basis, the sewage pipe of the apartment building gets choked. This used to cause unusual noises in Sarita’s kitchen sink. One night when Sarita wakes to drink water, she heard the noises coming from the sink’s sewage pipe again. She decides to open the sewage pipe and clean it up herself. Upon doing so, she found hidden bags loaded with money in it. Being a bank employee, she was easily able to verify the cash at her bank. It was all real money!

She lied to Sushant that the money came from her mother’s fixed deposits. Now Sarita began her ritual of waking up every night and “unchoking” her kitchen pipeline. Due to the endless cash she was receiving every night from her kitchen pipe, she successfully cleared all her husband’s debts and also bought expensive items to decorate her home.

Now the plot takes a funny twist. The money Sarita was receiving from her kitchen pipeline was in denominations of INR 500 and 1000. Now it happened that the Indian Prime Minister Narendra Modi enacted his ever popular “demonitization policy” and banned all old INR 500 and 1000 notes. Modi had introduced new currency notes of INR 200, 500 and 1000. Now what could Sarita do? Will the easy money she was getting every night simply turn out to be a bundle of waste paper?!

Sarita gets frustrated and to add to this frustration she had to spend stressful long hours of overworking at her bank due to the newly implemented demonetization policy. To make matters worse, Sushant was suspecting that she was having an extra-marital affair. The dejected Sarita goes to her kitchen sink one final time, opens the pipe and to her surprise finds new currency notes in INR 2000! Her happiness knew no bounds and she started using the money once again and this time she became extra possessive about her kitchen sink! From now she started keeping the kitchen room locked.

Now Sarita had acquired loads of cash which she deposited at her bank. But her luck gave way and robbers barged in the bank and stole all the bak’s money including her at gunpoint. Sarita returned home and learnt that the Mumbai police have set on a criminal investigation regarding large amounts of INR 2000 notes. Sarita feared that the notes she had used all this while were actually the ones the police were on the search for! She feared of a possible criminal action against her. The police were already suspecting her. However, her husband came as the savior and told the police about how the money bags were found in their apartment.

Upon further investigation, the police caught hold of the money-dumping unknown man who was actually a local shady politician’s assistant named Rajendra (Ajay Nathani). Sarita and her husband were freed of suspicion and were able to escape from legal action. In fact, when the police raided Rajendra’s house and got hold of loads and loads of black money, Sarita and Sushant were rewarded 10 percent from that!

The exploitation of women for financial reasons occurs in India and many other countries across the world. Working wives like Sarita are most often exploited for financial purposes by their households. I don’t know why Sarita’s husband chose to remain unemployed but his unemployment and loan burden did have a dire impact on Sarita’s life.

Choked reveals this situation through the life circumstances of Sarita and I feel that after watching the movie people may be able to rectify their wrongdoings for the better. 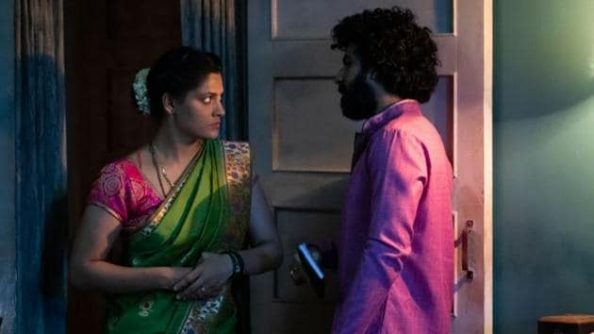 Depicts The Possessive Mentality Of Many Husbands

Choked does reveal the positive mentality of many husbands towards their wives. A scene from Choked goes where Sarita was suspected of cheating by Sushant as she was paying off his debt to a man named Reddy (Upendra Limaye). This depicts how women may get easily targeted by their husbands and get accused for some misdeeds that they didn’t commit.

In fact, Sarita was doing her duties as a caring wife by working hard and trying to pay off her unemployed husband’s loans. She never considered him as a burden on her. However, I feel what she was doing, turned out to be somewhat thankless from Sushant’s behalf.

But still, Sushant did support her at times when she was in mental distress. Also, at the end he did stand by her side when the police suspected her. Sushant was possessive but caring as well.

I must say, Anurag Kashyap put the same matter on the big screen that I had in my mind for years together since the implementation of the “unnecessary demonetization policy” in India. To some extent he was successful in exposing this mindless controversial policy of the Indian government through Choked.

The lives of the middle class and the lower middle class people were the most affected due to the non-essential demonetization policy which the government, without any notice, had implemented to bring back the “so-called” black money to India.

Choked reveals the dark side of the demonetization policy by showing how several Indian citizens lost their hard earned money due to this immature decision taken by the government. It also shows how middle class working people like Sarita’s life and relationships got affected due to the sudden implementation of the policy. As a lower middle class working wife, she had to spend rigorous hours working at her bank which hampered her personal well-being as well as her relationship with her husband. Not just Sarita, as per my opinion the demonetization policy impacted the lives of each and every Indian citizen financially, professionally and personally. This mindless act by the government to bring back black money to India was an utter failure later on. I truly appreciate Kashyap’s efforts for bringing out an eye opener like Choked before the audience.

However on the contrary, the demonetization policy had its positive side too. It was only due of the policy and the implementation of new INR 2000 notes that the police were able to track the black money from Sarita’s place.

From the audience perspective Choked may not look very interesting. However, if you happen to watch the movie closely, you will get to understand the true essence of the plot. The plot is an eye opener about the situation of the lower middle class in India and the impact of the controversial “demonetization policy” which was implemented by the Indian government.

Choked may not have been appreciated enough by the audience due to its political plot which involves the Indian government. But the truth is stranger than what we think or what our minds can accept. And the truth is that Kashyap did try to reveal the controversial political and financial situation in India through this movie.

Choked interesting story was written by Nihit Bhave and its cinematography and editing were done by Sylvester Fonseca and Konark Saxena respectively. All the actors including the supporting ones like Amruta Subhash and Rajshri Deshpande carried out their respective roles quite well. And why won’t they? After all, the movie is co-produced and directed by Kashyap who is well known to elicit solid performances from his actors.

Choked also portrays neighbourly relations as it can be seen from the movie that Sarita shared a friendly and yet stressful relationship with her neighbour Sharvari (Amruta Shubhash). If you agree with me, this is indeed a real-life situation as many of you might have that “neighbour” who is friendly but still capable enough to stress you out.

Choked’s plot for sure is loaded with thrills starting from Sarita’s loan paying endeavors to the bank robbery which left her cashless. Still I feel the ending could have been made better for me to have tagged Choked as a “great” movie rather than a “good” one.

If you agree with me that “money talks”, then you can very well choose to enjoy one of your Sundays by watching “Choked” on Netflix. Also, next time when your kitchen sink chokes, don’t forget to check it out for possible money-laden bags inside! 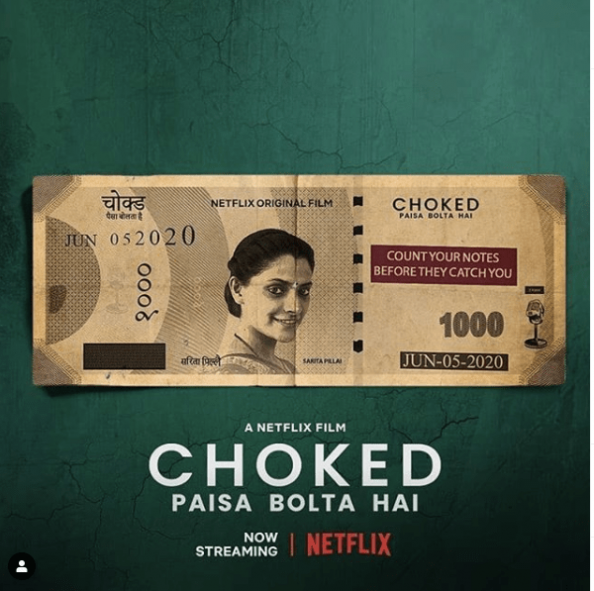