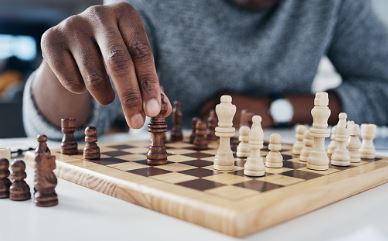 September 1st is American Chess Day! TMB joins in on the celebration by celebrating these three chess films with the biggest moves!

A man seeks answers about life, death, and the existence of God as he plays chess against the Grim Reaper during the Black Plague. Tormented by the belief that God does not exist, Block sets off on a journey, meeting up with traveling players Jof (Nils Poppe) and his wife, Mia (Bibi Andersson), and becoming determined to evade Death long enough to commit one redemptive act while he still lives.

During 1962’s Cuban missile crisis, a troubled math genius finds himself drafted to play in a U.S.-Soviet chess match — and a deadly game of espionage. Check this chess film for your daily dose of mental buzz.

A sadistic mastermind unleashes a twisted form of justice in SPIRAL, the terrifying new chapter from the book of SAW. Working in the shadow of an esteemed police veteran (Samuel L. Jackson), brash Detective Ezekiel “Zeke” Banks (Chris Rock) and his rookie partner (Max Minghella) take charge of a grisly investigation into murders that are eerily reminiscent of the city’s gruesome past. Unwittingly entrapped in a deepening mystery, Zeke finds himself at the center of the killer’s morbid game.

Life of a King: Trailer