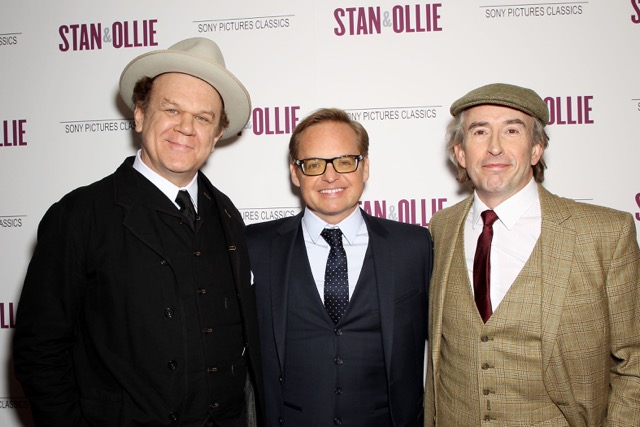 Steven Coogan and John C. Reilly play to perfection Stan Laurel and Oliver Hardy in “Stan & Ollie,” a heartbreak of a movie set in the iconic comic duo’s twilight years. The Sony Classics film was celebrated Monday evening with a private screening at the Elinor Bunin Munroe Film Center in Lincoln Center attended by the stars, director Jon Baird, two-time Oscar-winning make-up artist Mark Coulier and screenwriter Jeff Pope.
Known for their impeccable slapstick coming timing, Laurel and Hardy were at the top of their game in 1937 when the film opens. But by the 1950s, with their popularity fading and after a number of bad business decisions, they went broke. They received no residuals when their films were shown on television, fleeced by producers Hal Roach, Charlie Chaplin and even Harold Lloyd, who owned their movie rights. (It didn’t help that Hardy  had a bad gambling habit and a succession of ex-wives clamoring for alimony.)
“Stan & Ollie” is a gently, affectionate look at the comics, who had both a professional and deeply personal bond and seemed to enjoy performing for each other as much as they did for an audience. The film focuses on their tour in 1953 of England and Ireland, which they embarked on desperate for dough. At first they performed in depressing, second-tier concert halls to sparse crowds. After the comedians do publicity, for free — their fans mostly thought they were retired —and word leaks out that they’ve lost none of their comic timing, tickets became in demand and the comics start getting booked into larger, prestigious performance spaces in one of the happier instances of the film. But Oliver, some 150 pounds overweight, suffers from poor health, and the movie’s added poignancy comes from the realization the tour will be their final comic collaboration.
Although they bicker and hold old grudges, their perfectionism and devotion to their craft as well as their affection and devotion to each other is at the heart of the film.
“I cried when I first read the script,” the director told me on the red carpet, adding, “There’s not many scripts that do that. So those were the things that got me interested but also there was the challenge of it. It’s a big challenge because of the responsibility of telling the story of these icons and getting the castings right.”
Baird’s inspired casting has already garnered Golden Globe and Broadcast Film Critics Association nominations for Reilly and a British Independent Award nomination for Coogan.
Playing the slimmer British half of the duo, I asked Coogan on the red carpet how familiar he was with Stan’s work before he undertook the role?

“I’m a huge fan of Stan Laurel,” he told me. “When I had the opportunity to play him, it was something I would find irresistible. The script was written by Jeff Pope, my longtime collaborator (Philomena), who I’ve written many screenplays with. But he wrote this by himself,” he paused, “but I gave him a few tips on the script, but it’s his script.”

Coogan added that growing up he loved the Laurel and Hardy movies.  “They had a big influence on me and my comedy that I’ve done in the UK, so, to me it was, although it was a daunting task, it was one that I couldn’t say no to, because I felt like I had a shot, and when John C. Reilly agreed to play Oliver Hardy, then I knew we had … I felt we’d make a strong team.”
And the hardest part about playing Laurel?
“It wasn’t the dance routines and the sketches, which were quite a lot of work, actually, a lot of hard work, but as long as you put the hours in, you can learn a dance, however exhausting it is. You can do that. The real hard work was getting under their skin, finding out who they were, and bringing educated guesswork, really, conjecture on our part, to bringing them to life, to bringing their personal lives to life. Because there’s not really, there’s no proof whether we’re right or wrong, we just had to make an informed decision about how they would have been together.
The emotional demands on the role were quite strong. There’s a scene in the bedroom where John and I as Oliver Hardy and Stanley are reconciled after a huge kind of breakdown in their relationship, and it’s a very poignant scene, and that was tough to shoot, because you really had to dig deep to find the emotion. The emotional side of it was certainly the most demanding, beyond all the physical and all the comedy stuff,” he said.
“And in the end it’s a love story. They loved each other,” Coogan said.
I caught up with John C. Reilly, who didn’t do red carpet interviews, at the after party at Lincoln Ristorante. In the film he’s hidden under layers of latex and a voluminous fat suit. Was any part you see actually him?
“Well you could see most of my face. It’s this area under here,” he pointed to below his nose “that they kind of augmented. But this part of my face is pretty much real. It’s my mustache. Luckily the hair on my mustache was not so dark, so it wasn’t so noticeable. I didn’t have to walk around with different mustache.”
As for gaining weight for the role, the director tried to talk him into it.
His reaction? “No way,” he said. “I could not put on enough weight in order to make it right. I’m not going to gain like 125 pounds.”
As for the accolades rolling in for his performance and the film, he told me smiling, “So far so good. People are really loving the movie.”
Featured photo: John C. Reilly, director Jon Baird, Steve Coogan/Marion Curtis/Starpix
Comment with Facebook