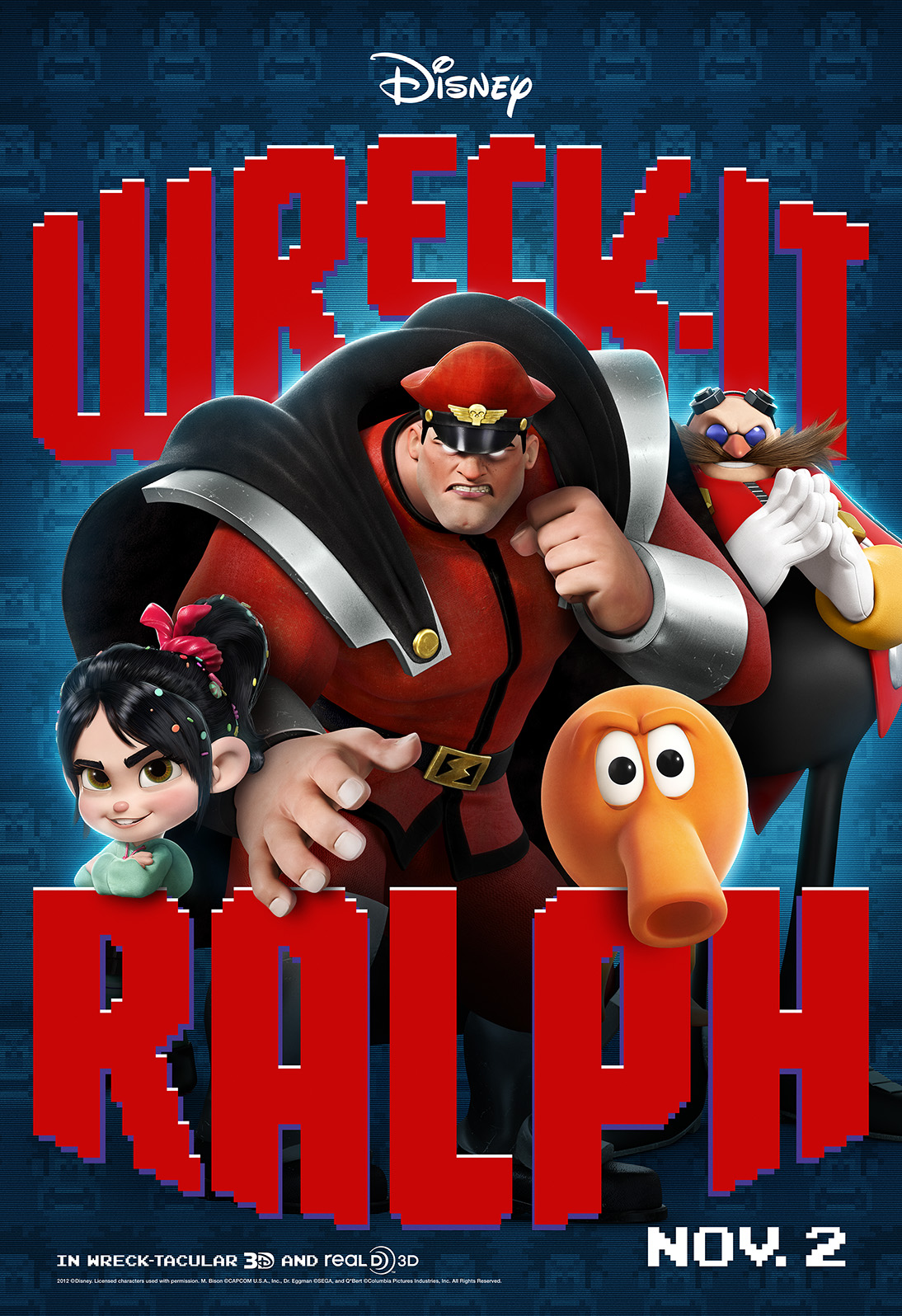 M. Bison is the bane of my existence. Not really but back in 1991 he was a big fucking problem. If I even managed to get passed Vega or Sagat to fight him it was almost a guarantee that if my Hadouken’s weren’t timed perfectly right then I was getting psycho crushed into a statue and mocked by the locals. Well Bison is back and now plans on causing misery to poor poor Wreck it Ralph. Check out the poster featuring the villains and heroes of Wreck it Ralph:

Walt Disney Animation Studios and Emmy(R)-winning director Rich Moore (TV’s “The Simpsons,” “Futurama”) take moviegoers on a hilarious, arcade-game-hopping journey in “Wreck-It Ralph.” Ralph (voice of John C. Reilly, “Talladega Nights: The Ballad of Ricky Bobby,” “Step Brothers”) is tired of being overshadowed by Fix-It Felix (voice of Jack McBrayer, “30 Rock”), the “good guy” star of their game who always gets to save the day. But after decades doing the same thing andseeing all the glory go to Felix, Ralph decides he’s tired of playing the role of a bad guy. He takes matters into his own massive hands and sets off on a game-hopping journey across the arcade through every generation of videogames to prove he’s got what it takes to be a hero. On his quest, he meets the tough-as-nails Sergeant Calhoun (voice of Jane Lynch, TV’s “Glee”) from the first-person action game Hero’s Duty. But it’s the feisty misfit Vanellope von Schweetz (voice of Sarah Silverman, “The Sarah Silverman Program”) from the candy-coated cart racing game, Sugar Rush, whose world is threatened when Ralph accidentally unleashes a deadly enemy that threatens the entire arcade. Will Ralph realize his dream and save the day before it’s too late? “Wreck-It Ralph” crashes onto the big screen on November 2, 2012, in Disney Digital 3D(TM) in select theaters.

I like them. This movie, damn it to hell, is just nasuatingly nostalgic and I can’t help but try my best to identify every single one of these fuckers that are on the screen. Ah shit, I hope my kid does(n’t) like this. This is a problem. This is worse than that damn google doodle with the basketball that I havent figured out how to ignore..