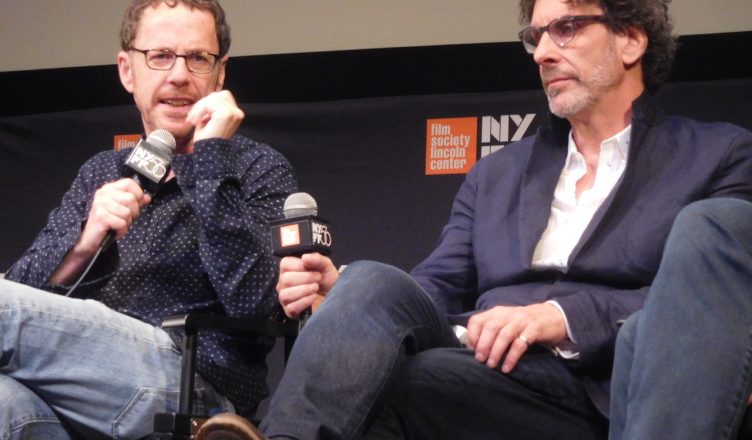 The Ballad of Buster Scruggs, the new anthology Western by Ethan and Joel Coen, revisits the genre with an absurdist bent while looking through the lens of mortality. The film screened last week at the New York Film Festival to a sold out crowd.

The Coens are familiar with the genre; in the past they’ve done a modern western adventure (“No Country for Old Men”), and retooled a Western classic (“True Grit”), but this time around they’ve created something new, a stream of six short films that are a take on mythic tales of the Old West but with and a Rod Serling twist. Along the way there’s the Coen brothers staples of violence, blood, cruelty and reversals of fortune.

The first story, which gives The Ballad of Buster Scruggs its name, is the funniest and stars Tim Blake Nelson as a demented Gene Autry-like singing cowboy, dressed all in white, who’s as fast with his gun as he is with a song. And whether he’s killing or singing he’s always smiling. It’s a Western splatter musical, possibly a new genre.

The longest segment is a heartbreaker (and also my favorite) about two shy people (Zoe Kazan and Bill Heck) on a wagon trail heading West who almost come together in “The Girl Who Got Rattled.” This is as close to a romance as you’ll ever find in a Coens’ film but because it’s their film don’t necessarily assume happily after ever.

In another segment James Franco plays an inept bank-robber who is nearly hung twice, a situation that inspires the funniest line in the film. Other terrific actors in the large ensemble in the various episodes include Grainger Hines, Stephen Root, Brendan Gleeson, Liam Neeson, Tyne Daly and Tom Waits.

During the Q&A following the 6 p.m. screening last Thursday, Joel Coen — part of  a panel featuring his brother, actors Tyne Daly, Zoey Kazan, Stephen Root, Tim Blake Nelson and Liam Neeson — noted that he and his brother began writing the first of the six stories 25 years ago. “We wrote them roughly in the chronological order in which you see them in the movie. The last one was made shortly before we made the movies actually.”

“This is a strange animal,” Joel said of the project, “because we did write these as shorts. When we were first writing the first three or four we just kind of wrote them for fun and put them in a drawer, thinking that we’re probably never going to make these. At a certain point, probably about seven or eight years ago, we thought, well maybe we can make them together, so it wasn’t like where you sit down and write a script.”

Asked if they realized they were following a story thread focused on mortality, Ethan Coen replied, “Not really.”

Joel agreed, “Initially no” but “before we wrote the last one we sort of realized that they’re kind of about the same thing.” People kept dying.

By the time they got to the last story, featuring a terrific Tyne Daly, (also Saul Rubinek, Gleeson, Chelcie Ross and Jonjo O’Neill) on a stagecoach journey to hell, “about mortality, we were thinking about it consciously then,” said Ethan.

The actors were asked if they calibrated their performances to the other actors and if they read the whole script, including the episodes in which they did not appear?

“We all read one another’s (part),” Nelson said, “and I think that knowing that they were all so squarely sub-genres of the Western, it made you feel more responsible to be really legible in your own genre in terms of the performance, and so it sort of underscored the stylistic choices going on I think.”

Daly contradicted him. “Nobody told me nothing. I didn’t read the other plays. I never saw it until tonight because they’re very smart directors. It’s probably better to keep old actors in the dark.” (The audience roared.)

A member of the audience complained about The Ballad of Buster Scruggs’ title. After seeing the whole film, he said, he thought the title was misleading.

“You’re absolutely right,” wisecracked Ethan. “If we’d thought of a better title we’d have used it. “

Zoe Kazan said there was a flowing connection between the stories and that they had a flow. “There’s a real thread of logic between each segment that prepares you for the next one. That there’s a creative expectation that those after the first two of our main characters are going to die in each of these and then the Tom Waits chapter (Cold Canyon), there’s a reverse of that expectation — you think he’s dead and then he’s not. Then that makes you have hope for our section, then it’s also the longest… You have lulls in this thinking that these  people might survive and live happily ever after.”

Earlier in the day at the press conference, the actress noted, “Often when you see a movie that you’re in —  I don’t know about other actors — but I spend  half the time like this (puts her hands over her eyes),” she said. “And to know that I could watch like 80 percent of this movie happily was wonderful.”

An Annapurna Production and Netflix release The Ballad of Buster Scruggs will be released in theaters November 16.