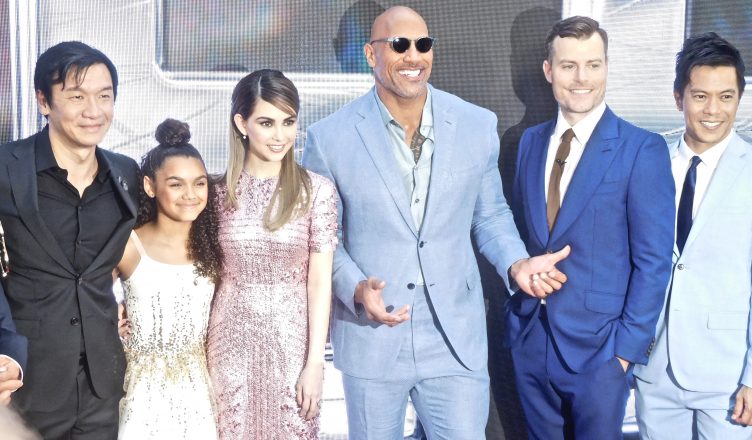 “You gotta embrace the sexiness,” said Dwayne Johnson Tuesday evening on the red carpet at the premiere of his new action thriller Skyscraper. He added,  “I’m the sexiest man alive.”

The comments, which he made in front of the AMC Lincoln Square, on a red carpet that extended from 67th to 68th Street, were in response to a reporter’s question we didn’t hear but who was going to argue to the Rock’s assessment? Johnson, who’s probably the biggest movie star in the world at the moment, flashed his trademark megawatt smile and won over the press and the screaming fans standing behind red ropes.

In “Skyscraper,” Johnson plays Will Sawyer, a former FBI Hostage Rescue Team leader and U.S. war veteran who now has his own security business assessing the safety of tall buildings. His most recent assignment takes him and his family to Hong Kong, where his assignment is the security of the highest building in the world, the Pearl. After assessing it as the world’s safest building, it suddenly goes ablaze — the work of mob bosses looking for a big payout — and Will finds himself pulling out all stops to rescue his family from the burning 96th floor of the 260 story building where they’re nestled. Written and directed by Rawson Marshall Thurber, “Skyscraper” stars Neve Campbell as Will’s wife, and McKenna Roberts and Noah Cottrell as his children.

Will desperately attempts to reach his family on the 96th floor via a construction crane and by leaping across a 40-foot chasm through a window, all at a speed faster than, say, it takes the average man to make it to the other side of his living room? Oh yeah, did we mention he has a prosthetic leg? And that the duct tape he wraps around his hand is all that gives him traction as he slides around the walls of the top floors from dizzying heights that will make viewers scared of heights — like me — squeamish and dizzy the entire episode?

Does it ridiculously strain credibility? Hell yeah! But then no one goes to a Dwayne Johnson movie for every day reality.

Asked if he was concerned, as the star and a producer of the film, with it coming off corny or too unbelievable, replied the star, “Yes, because you know you never know. You put your best foot forward, you surround yourself with the right people, people who are better at their job than I am, smarter than me, but you never know how things are going to turn out.”

As for it being corny, he was confident in his support people. “You know you gotta protect the man,” he told a reporter.

But then as a producer, he said, “You test the movie with audiences, and they came back and they went bananas over it.”

The movie’s premiere in New York was very special to the former wrestling champion.

“It’s the first time one of my movies has ever premiered in New York City. And it’s exactly 2.2 miles from Madison Square Gardens — I counted — and that’s where I started my career 20 years ago.”

Johnson noted Skyscraper was “an homage” to action thrillers he loved, including “Die Hard,” “Towering Inferno” and “The Fugitive.” Primarily he said, he wanted to make a movie anchored in the message of the importance of family. “And keeping your family together, which is relevant today considering what’s happening.”

Added Johnson, “I would move heaven and hell to protect my babies.” The Skyscraper star has three children, including an infant with girlfriend Lauren Hashian. Johnson said with the baby he averages three minutes sleep a night. “I have no idea what that is, sleep. And if I drink too much that’s a problem.”

“Family is everything to me,” added Johnson. “I have a rule wherever I shoot in the world I bring four things — not in this order — my gym, my family, my dog, my security.”

Talking about family, is he getting married anytime soon he was asked?