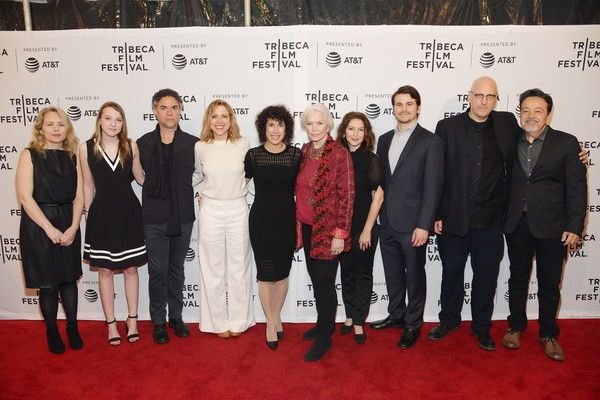 Stars Jason Ritter and Ellen Burstyn came out for the New York premiere of Jennifer Fox’s film The Tale at the Tribeca Film Festival Friday evening.

Based on Fox’s own true story of sexual abuse, the film stars Laura Dern as Fox. It got a lot of attention at Sundance where it was snagged by HBO which will air the series May 26.

This story begins when Jennifer’s mother, Nettie (Ellen Burstyn) discovers a short story from her daughter’s middle school days about her first sexual experience, with her running coach (Jason Ritter). Jennifer was just 13 (Isabel Nélisse) and he was 40. The relationship was facilitated by Jenny’s riding instructor, the mysterious Mrs. G (Elizabeth Debicki). Nettie confronts her daughter about the episode. Jennifer had always looked back with fondness on the time she spent with the two adults she considered charismatic and considered it a relationship. This was how she spun it but her mother’s confrontation makes her reevaluate how she processed the abuse.

Thirty years later, Jenny sets out a journey to confront both where Mrs. G and Bill, played in late life by Frances Conroy and the late John Dern. What makes the show so unusual is that it’s a memory piece with Jennifer’s memories shifting  and changing as she tries to process what occurred ad ho she spun it. She has conversations with her 13-year-old-self (Isabel Nélisse) and even Mrs. G and Bill in an effort to understand how and why events occurred so long ago.

The Tale is the first narrative feature from the Sundance Grand Prize Winner and Emmy nominated writer-director who told the audience at a Q&A following the screening, “I actually wanted to tell this story since I was 14. That’s why I wrote, The Tale and as soon as I became a filmmaker, which is quite young, in my early 20’s, the first thought I had was that I want to make this into a film. And in fact I wrote a treatment for it and it was terrible so I put it aside. And at that time I was still calling it a relationship, so I think it was just the inner self in me wanting to try to figure out what this was through my art.”

It wasn’t until she was in her mid-40’s and doing another film, which was not about sexual abuse, with a group of many women and it came up in conversation that half of them had stories like hers.  “And in hearing that all of a sudden this paradigm came up and it sounded like I realized this relationship that I had actually was sexual abuse and it’s like there was a seismic shift and I thought immediately I’m ready to tell this story.”

An element of the film which is very disturbing is that there appears to be graphic sex scenes the adult Bill and the 13 year-old Jenny Isabel. They look very real but Fox assured the audience that Ritter is doing the sex scenes with a body double and that the young Isabel, who was 11 years old when she made the film, was actually three feet away.

As for the lasting effect of the abuse on Fox, she said, “Basically this event is processing in me all the time and changing and shifting. I feel that is part of who I am. It also allows me to make films to connect to people in stories. There’s an irony that there there’s things that I’ve gained from this event that a nice white Jewish girl from Philadelphia might not have understood if it had not happened to me.”