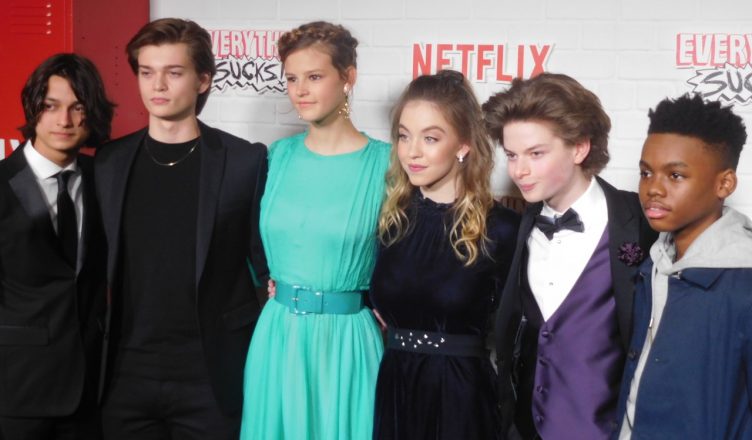 “Everything Sucks!” the upcoming Netflix series co-created by Michael Mohan and Ben York Jones, beautifully showcases the eternal lure of coming-of-age films, along with the nostalgia, and the heartache and angst of teenagers.

At the show’s New York premiere at the AMC Theater on 34th Street last week, Cindy Holland, Netflix’s savvy VP of Content, said in her introduction before the screening, “It’s for anyone who ever felt like an outsider, misunderstood and who took solace in your friends becoming your family.”

The featured stars, including Jahi Di’Allo Winston (Luke), Peyton Kennedy (Kate), Sydney Sweeney (Emaline), Elijah Stevenson (Oliver), Rio Mangini (McQuaid) and Quinn Liebling (Tyler), told me on the red carpet they were excited to be seeing the show for the first time. They sat together in the first rows and you could hear them laughing and squealing all through the screening.

“Everything Sucks!” Is set in 1996 in a town called Boring, Oregon. The town actually exists and is twelve miles southeast of downtown Portland. According to Wikipedia, boosters of Boring use the slogan, “The most exciting place to live.” Naturally the town’s name is a running joke throughout the show although it looks like a pretty decent place to live. (Tourists want to have photographs of themselves standing next to the Boring sign but they never actually go into the town muses one of the show’s characters.)

The story revolves around the stand-off between the school’s A/V Club (Luke and his besties Tyler and McQuaid) and the Drama Club (led by scary-mean Emaline and Oliver, on whom she has an unrequited crush). Both groups are nerdy outsiders, who eventually join forces to make a film entitled “Intergalactic Lust.” This sci-fi fantasy is directed by Luke with Tommy Wiseau-like fervor and is to be screened for the entire school.

Although very much an ensemble show, Luke is the focus. He’s the first person we meet, a sweet-faced kid, he’s furiously peddling his bike to school and late as usual but met by his loyal besties, Tyler and McQuaid. Luke has struggles and griefs. He has a crush on Kate who may be a lesbian. He has a deadbeat dad he misses. And he’s a latchkey kid; his harried single mom (Claudine Nako) is loving but away for long stretches of time as a flight attendant. When she gets romantically involved with Kate’s dad, the school’s principal (Patch Darragh), things get sticky and hard for Luke to take.

The charismatic actor who plays Luke, Jahi Winston, is already a show business veteran at 14 years old. He did a stint on Broadway in “The Lion King” and is best know for the BET biopic of pop group New Edition. Currently he’s in the film “Proud Mary” alongside Taraji P. Benson, who he described on the red carpet to me as his “industry mom, and I’m her industry son.”

Asked about the show’s many sly references and how it speaks to today’s generation, Jahi told me, “People underestimate this generation so much and think that they can’t comprehend what’s going on in the world. But our problems are the world’s problems and this is a platform to show that and showcase that.”

As for Jahi’s upcoming projects, he rattled off that he has a movie coming out with Kevin Hart and Bryan Cranston called “The Upside.”

“I’m really excited about it. I play a relation of Kevin Hart, but I can’t tell you more,” he said. “And there’s my single ‘Shine’ on iTunes, Spotify.” (Later at the afterparty at the Sushi Roxx he showed off some great moves on the dance floor.)

Most of the cast members are only 14, but Sydney Sweeney, a stand-out as Emaline, was born in 1997, a year after the show is set.

What did she know about 90’s trends I asked on the red carpet?

Sweeney said of her initial reaction to the script, “I never read anything like it before. There’s always those shows that represent a generation. You have ‘Friends,’ you have ‘That ’70s Show.’ I’m really hoping ‘Everything Sucks!’ becomes our generation’s show, that they’re like, ‘This is the show that represents us.’ Even though it’s set in the 90s, it’s just a backdrop for the whole persona of the show. Everything that the characters go through, the relationships and the issues, are what we’re still going through today.”

How did she immerse herself in the period?

“We got sent a really cool list of different shows and movies to watch and we all got together and had movie nights and TV show nights and watched them all.” She singled out, “Ten Things I Hate About You,” “Breakfast Club,” “Beavis and Butthead” and “Freaks and Geeks.”

“We loved ‘Freaks and Geeks.’ We were so surprised it only got one season….It is so good!”

As for the show’s audience, the actress said it should appeal to teenagers but also older adults in their 30’s, who are remembering what they went through and their time at high school.

What she hopes audiences take from the show?

Quinn Liebling, 14, described his character (Tyler) as “geeky” and “a pop culture junkie, who loves his friends, Luke and McQuaid. Those are kind of his family in a way.”

I remarked how different he looked on the red carpet from his character.

“I had my hair blown out today and that was interesting,” he deadpanned.

He told me his go-to movie to get into the period was “Stand By Me.” But also, “a lot of it was realizing that the relationships stay the same but technology changes. On set it was very interesting because we would spend less time on our phones, so we’d be able to talk to each other more. And I think that’s what helped us get closer as a cast as well.”

Claudine Nako, who plays Luke’s mother Sherry, told me what drew her to the show. “There’s a lot of heart in this script and that’s what drew me to it honestly. That it’s a comedy but it has so many moments gripping your heart. It’s heartbreak and love and all those emotions that we go through as kids and adults. And all the characters, everybody has their moment,” she said. “Everybody is somebody you want to know more about.”

The youngest star of the show, Peyton Kennedy, just turned 14 in January. At her age what was it like tackling difficult subjects like bullying and sexuality?

“It’s a really important story to tell,” she told me. She hoped the teenagers came away with feeling that, “It’s okay to be yourself. I think that’s the overlying message no matter who you are.”

As for getting into period set during the Clinton years, the actress said, “It was really the pop culture. I got really involved in the fashion and music and stuff like that. But other than that the characters could be in any timeline and so it was really easy to transport into 1996.”

The trend from the 90s she’d like to see carried over to the present day?

“I think just the overall lovability and grunge that the 90’s had that I hope we captured.”

Later on the red carpet, just before he went into the theater, I asked show creator Ben York Jones if “Everything Sucks!” reflected his own teenage years?

“Well to some degree,” said Jones, who is also an actor and has a small role in the series as a slacker cameraman.

“It’s such an ensemble piece. There’s so many different stories I’d like to think that Mike (show co-creator Michael Mohan) or myself or my producing partners sees ourselves in all of the characters. I was in high school in the 90’s. I was somewhat invisible, as I think these kids are, and so we just wanted to speak to some of the more invisible kids at school. I hope they feel like the show feels like home, that it feels comfortable and welcoming to them.”

The ten-episode series “Everything Sucks!” streams Friday, February 16 on Netflix.