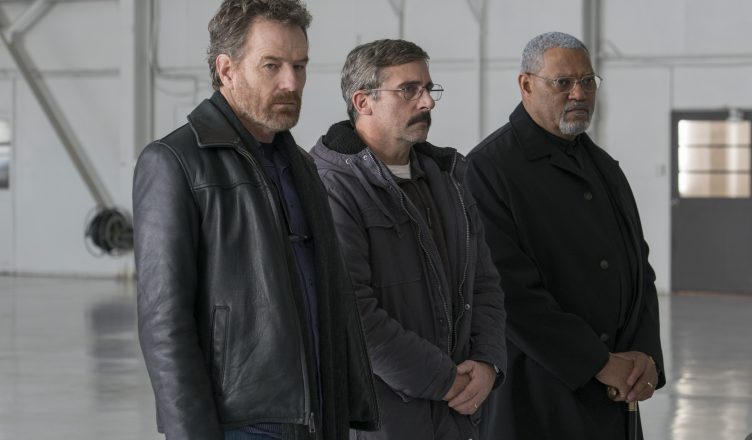 The 55th annual New York Film Festival kicked off Thursday night with the world premiere of Richard Linklater’s Last Flag Flying. This is Linklater’s third NYFF film but first opening night and its significance was not lost on him.

In his introductory remarks at the 6 p.m. screening at Alice Tully Hall, the director told the full house, “I know the history and to be the opening night film here, you look at the list of filmmakers who have been here in this slot, it’s an incredible honor.”

Last Flag Flying stars Bryan Cranston, Laurence Fishburne and Steve Carrell as Vietnam vets who meet after many years under tragic circumstances: mild-mannered, slump-shouldered Doc (Carrell), is on his way to Arlington National Cemetery to bury his only son, killed days earlier in Iraq. Alone in the world, Carrell’s character turns to his old buddies for support.
Except for Carrell, who is shooting a film, the stars attended the premiere and chatted with journalists on the red carpet and at the press conference earlier in the day.

Based on Darryl Ponicsan’s novel, the Linklater film is a sequel to the author’s own 1970 book, “The Last Detail,” which was brought to the big screen by Hal Ashby and starred Jack Nicholson as Billy “Badass” Buddusky, a soldier ordered to escort a young hapless sailor (Randy Quaid) to a naval prison for a long sentence incurred committing a petty crime. Ponicsan co-wrote that screenplay with Robert Towne.

This new film is not actually a sequel to the 1973 film but as Linklater noted at the press conference earlier in the day, “echoes” some of the same locations, themes and storylines. In Last Flag Flying three decades have elapsed since the events of “The Last Detail.”

Ponicsan co-wrote the screenplay with Linklater and described that collaboration to me on the red carpet as “the most pleasant experience I’ve ever had in writing a script.” He added of Amazon’s support, “It reminded me of the early days of the 70’s, the Golden Age of movies, when ‘The Last Detail’ was done and the studios trusted the filmmakers a lot more than they do. And Amazon is now filling that position. They’re saying, ‘Okay, here’s the money, go make the film for this money,’ and they trusted us and they left us alone.”

I asked Ponicsan about the changes from the book, including names and other details.

“We had to because it gets a little complicated because originally the novel is a sequel to ‘The Last Detail,’ no question,” he told me on the carpet, adding, “and originally when they were going to do a film of the novel, we were going to do it with Nicholson and Quaid but Nicholson dropped out. He didn’t want to do it. And Rick said it’s still a good story. Let’s do it as a stand alone story. Change the characters. Change it to the marines. Change the defining event of their lives. And I said, ‘Great, let’s do it.’ And we did.”

I noted how even though Last Flag Flying is set in December 2003 it feels so timely. We are stuck in the same wars.

“I know, I know,” Ponicsan shook his head. “From one quagmire to another and now who knows where we are?”
The aging vets in Last Flag Flying have made some big life changes in three decades. The former wild guy Mueller (Fishburne) has become a staid pastor, and the foul-mouthed Sal (Cranston) has become a drunken live wire who owns a dive bar in Norfolk, Virginia. Last Flag Flying could be a downer but anchored by the veteran actors who have real chemistry and skill at delivering Ponicsan and Linklater’s punchy lines, the film resonates with humor, pathos and humanity.

On the red carpet at Last Flag Flying’s premiere, Fishburne said of the comic timing “that when you’re dealing with a master actors like Bryan Cranston or Steve Carrell you can swing like that,” he said. “We also had about two weeks rehearsal which gave us time to discuss, trade off ideas and which switch other ideas, ask questions.”

Fishburne, who played Tyrone “Clean Miller” in “Apocalypse Now,” the 1979 film directed by Francis Ford Coppola set during the Vietnam Was, was asked about the role and its affect on his performance here. “‘The Apocalypse Now experience informed this character certainly because I had because I had a lot of history and knowledge of the Vietnam War.”

I asked how he acquired the deep pastor voice he uses in the church scene early in Last Flag Flying. “I found it in the scriptures,” he laughed.

The young “Hamilton” actor J. Quinton Johnson plays a young marine tasked with accompanying the body of Doc’s son —who was also his best friend — to another burial site after Doc discovers the actual details of his son’s death and changes his mind about giving his son a military burial. The actor also stared in Linklater’s last film “Everybody Wants Some!!” He described the director’s process: “He has his pace, he has that demeanor and that doesn’t change no matter what the subject matter is.”

Johnson’s character is in military garb most of Last Flag Flying, which affected his performance he told me. “The clothes inform the way you hold yourself. You already come in with the knowledge of who this person is and what their position is and everything, but then as soon as you put on those clothes every morning this last piece of the puzzle is cinched in every morning. It informs all of the things you already come in knowing.”

At the press conference earlier in the day Linklater described Last Flag Flying as “a road trip” rather than a war movie. “This doesn’t really have the trappings of a war movie. We’re not in battle, so this is so domestic,” he said. “It just happens to be these vets in this particular situation. I wasn’t really sure what genre we were in.”

The directed added that he was interested in the way “these two wars talk to each other and echo each other” and mainly how the men’s reflection on their wartime experience affected them many years later.

“They don’t usually make war movies about 30 years later guys hanging out. It’s always mission based. Mainly I was interested in the long term effects and how these guys changed and how they were affected and what it does to you.”

Asked about he got the right balance of humor with the drama, Linklater told journalists humor is a constant in life. “If you’ve had the worse job you’ve ever had, you’ve been in the worst, crappy conditions, what’s always there? Humor. But when people go to represent it, they think, oh, that’s terrible. They cancel it by being so serious about it, so I just wanted these guys to be hilarious, even in the worst of circumstances.”

Cranston, who probably has the funniest lines, said of the movie’s light moments, “It not only gives a rich texture to the storytelling but it also give the audience a little break from any kind of downbeat (energy), a chance to breathe slowly out and laugh and get back in the journey. And it’s also how we grieve.”

In the funeral scene at the end of Last Flag Flying Fishburne and Cranston’s character are in military uniform and fold the flag before presenting it to the father. How hard did they rehearse?

“We met with a consultant on the set to be able to show us exactly how to fold the flag,” Fishburne said. “We kept being told take your time. There’s no hurry. Make sure it’s right, not quick and so that’s how we did it. The hand position was very specific and how it was presented…The step by step actual decorum to it was really impressive.”

To a question about how the flag relates to patriotism and how the flag is represented today in protests, Fishburne said, “We’re not getting into that. We have nothing to do with that,” he laughed.

“Who gets to say what it means and who’s disrespecting it?” Linklater asked.

The traditional opening night party at Tavern on the Green was attended by Last Flag Flying’s cast and crew along with filmmakers and directors whose work will be showcased at the festival, which runs through October 15.

At the after party I chatted with Gay Talese, whose latest book about a Colorado motel owner who spied on his guests inspired the documentary “Voyeur,” directed by Myles Kane and Josh Koury. Talese, who looked elegant and dapper as usual in a bespoke suit and his snappy fedora told me he’d be attending Last Flag Flying’s premiere Wednesday when he will see the documentary — which is about him as much as the motel owner — for the first time.